Frank Capra and the manly virtues. 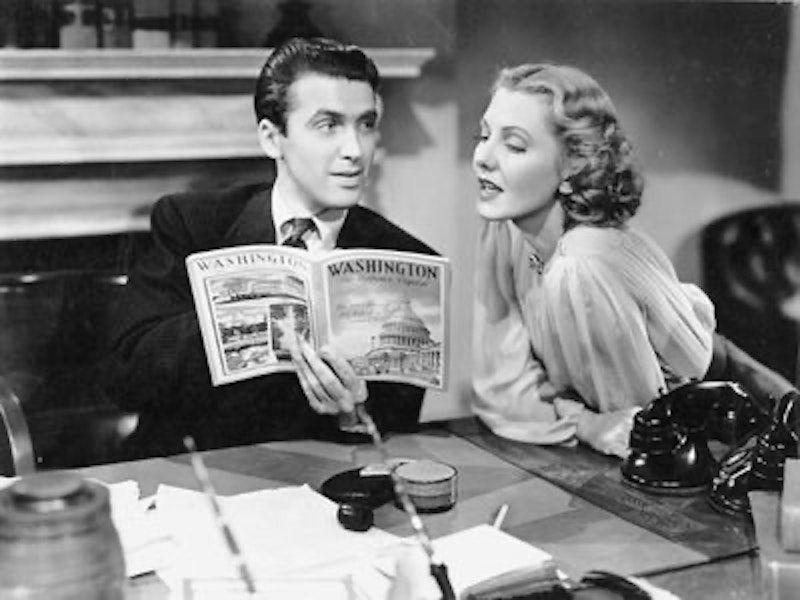 This is the first in a series on 12 political films.

The narrative of democracy is melodrama. In ancient Greek tragedy, film scholar Linda Williams argues, the moral is the inevitability of fate; Oedipus stabs out his eyes, Agamemnon sacrifices his daughter. There's no justice; wisdom comes in acquiescing to the cruel plan of the gods, and heroism inheres in the strength and stoicism with which the warriors face the inevitable. In contrast, our democratic melodrama, Williams says, "offers the contrast between how things are and how they could be, or should be." In melodrama, the evil villain is punched right in the moustache, the heroine is rescued from the railroad tracks, and virtue is recognized. The good guy is the good guy not because he's the toughest guy in the room, but because he does the right thing.

If democracy loves melodrama, then the greatest democratic film of all time must be Frank Capra's famous 1939 Mr. Smith Goes to Washington. Capra's plot, as is his wont, is an unabashed morality play. A senator dies, and patriotic innocent Boy Scout leader Jeff Smith (James Stewart) is appointed to replace him. The corrupt head of the political machine Jim Taylor (Ed Arnold) attempts to control Jeff and then to destroy him, but to no avail. The hero's faith in democracy sustains him through a dramatic exhausting 23-hour filibuster, and finally, in an apotheosis of justice, his virtue transforms the villain. Corrupt Sen. Paine (Claude Rains) admits his wrongdoing, Jeff is vindicated, and faith in the melodramatic righteousness of democracy is reaffirmed.

Admittedly, to make that righteousness as clear as possible, Capra has to streamline his democracy a bit. In particular, he has to take out all the politics. The Senate does have a majority party and a minority party, but neither their names nor their policy positions are ever mentioned. Indeed, we never find out whether Jeff belongs to the minority or the majority—nor, for that matter, whether he and Paine are members of the same party. Jeff's plan for a healthful camp for boys is presented as resolutely non-ideological; it is to be magically self-funded by voluntary contributions of pennies and nickels from the boys themselves, neatly evading the thorny issue of fiscal tradeoffs. Even Abraham Lincoln is depoliticized: he’s presented as a brave do-gooder fighting corruption, but the nature of that corruption, and the ideological justifications for it, are never raised, lest uncomfortable attention be drawn to the fact that the only black people in the film are servants.

The absence of politics from a political film leaves a certain amount of empty emotional and narrative space—a space that’s filled with an oddly insistent masculine anxiety. Jeff, the boy's club leader, is initially infantilized; he's wide-eyed, bushy-tailed, and unversed in the ways of Washington. His secretary, Saunders (Jean Arthur), refers to him derisively as "Daniel Boone," and is charged, in so many words, with keeping him out of trouble like a good mother. Paine, for his part, tells Jeff explicitly that the new Senator doesn't understand the difficult, corrupting work of adult men. This sentiment is delivered with significant thematic weight; Paine's a father figure, who knew Jeff's dad, and Jeff has idolized him all his life.

Capra loves to tout the virtuousness of children—he has a small boy recite aloud from the founding documents, and Jeff's boy's club prints up a paper to fight the corrupt Taylor machine. Jeff's implausibly childlike innocence is the source of his strength—a la Tom Hanks in Big.

But it's also a problem. Jeff is outraged when the press presents him as an oafish dope good for nothing but demonstrating bird calls. Yet, he has to eventually admit that he is in fact an oafish dope good for not much else than demonstrating bird calls. Jeff's a stumbling boy, as his clumsy stuttering around Paine's socialite daughter makes painfully clear. America needs men, and the script returns to the virtues of manliness again and again, like one of Jeff's much-derided homing pigeons.

Abraham Lincoln in his memorial was "waiting for a man who could see his job and sail into it, that's what he was waiting for," Saunders says—framing Jeff as a virile conqueror of both her heart and the polity. For his part, Jeff urges the other Senators to look about them to "see the whole parade of what Man's carved out for himself after centuries of fighting. Fighting for something better than just jungle law." The old law of tooth and claw and self-aggrandizement, which Paine sees as the measure of manliness, is a fraud. Real men set up boys' camps and beat the snot out of the jungle law.

The filibuster itself is presented as a trial of wits and endurance, with Saunders giving tactical advice from the sidelines, and then declaring her love for the hero—swept off her feet by his manly strength and virtue. Indeed, all that manliness rather obscures the fact that Jeff's filibuster prevents a needed economic relief bill from passing. The daring Senator's corrupt critics point out that his grandstanding results in real hardship, but the film doesn't listen, enamored as it is with the spectacle of Jeff, alone, fighting on, more and more brave and more and more unkempt. Who cares about people suffering when you can watch Jeff Smith, virile hero, lambasting his enemies with boy's club buttons and quotations from the Constitution.

Mr. Smith Goes to Washington is a melodrama, in that it shows Jeff as an avatar of virtue. But it's also of an older tradition. The melodrama about how the world can be better is sewn onto a story about how physical prowess is exciting and sexy. Like Achilles before him, Jeff Smith triumphs through strength of arms (or strength of legs, anyway.) His victory may be a victory for democracy, but it's also a validation of him as a man. He has stood alone against the horde, and as a reward he gets to marry mother-figure Saunders.

Melodrama is committed to the power of virtue and right. But the power of just plain power remains a temptation. When Jeff Smith shakes the world by physically holding the Senate floor, you can hear an echo of Trump promising to build his wall through sheer force of swagger. Political spectacle as masculine power fantasy can be made to complement melodrama, as Mr. Smith Goes to Washington demonstrates. But in conception and at heart, it's not democracy.