These counterparts to the Western—Strangler in the Swamp, Louisiana Story, Swamp Women—are another unique part of American culture. 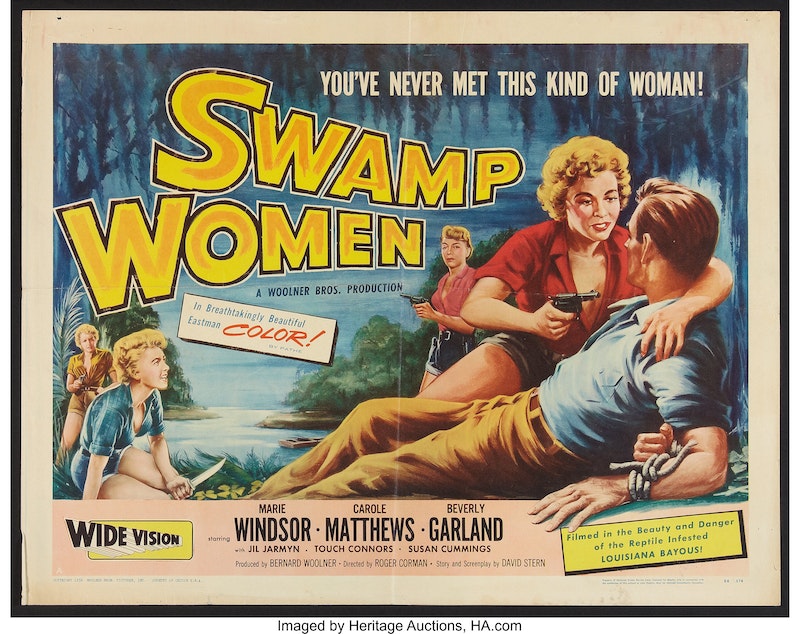 Just like the arid plains of the Old West, the muck of the swamp inspires a host of daydreams and nightmares. It’s a harsh and unforgiving landscape that can bring out the best and worst of any situation. During the 1700s the hardy French-Canadian exiles who came to be known as Cajuns traveled thousands of miles to the Louisiana swamplands to take refuge from British imperialists. With alligators, snakes, equatorial temperatures, bloodsucking bug hordes, blinding fog, and fungus encrusted everything, a swamp is no fun for anyone but those fluent in ecology’s wordless tongue.

The swamp movie represents a large and unique part of American culture. Like its counterpart the western, this genre has given auteurs the chance to show how emotionally charged narratives aren’t the only things at the center of character development and drama. The swamp is one of cinema’s greatest stars. Here now are a few highlights from the Golden Age of its career:

Strangler In The Swamp (PRC, 1946): A dream-like bliss illuminates this no-budget supernatural thriller. That atmosphere comes from a post-surrealist production design similar to Jean Cocteau’s Beauty & The Beast or Charles Laughton’s Night Of The Hunter. The movie’s plot is an afterthought lost in dense foggy weirdness. Unlike many other films made prior to the 1950s, Strangler In The Swamp holds up remarkably well, playing at just under an hour with the deliberate pacing of a well-made student work. Though most of the cast employs a hokey community theater style, lead actress Rosemary LaPlanche (aka Miss America 1941) juxtaposes the histrionics with subtlety and grace purring out florid lines like, ”The swamp makes me think of fairy tales, so lovely. At any moment you expect beautiful old legends to come to life.“

Louisiana Story (Standard Oil Co., 1948): This b&w pseudo-documentary reflected the Standard Oil Company’s self-image as a high tech engine of post-WW2 economic growth. It was also one of the earliest films to examine the Cajun culture in Louisiana’s Petit Anse Bayou when the fuel industry first arrived in the swamps south of New Orleans. The depiction of a monstrous steam blasting oil rig as an innocuous part of every day life there is strange and questionable, but the film’s much more than awkward propaganda. In a 2006 essay published by Southern Spaces, film expert Patricia A. Suchy describes Louisiana Story as an example of polyphonic composition—a story told simultaneously by a film’s director (documentarian Robert Flaherty) and its stars (a cast of local Cajun amateurs who helped Flaherty develop his script on the fly). We witness clashes of the modern and the ageless, the organic and the mechanized, hope for the future and the romanticized view of a fragile ecosystem and all indigenous traditions connected to it. Louisiana Story is a strange tangle of truth and fiction as majestic and murky as the swamp itself.

Swamp Women (Bernard Woolner Productions, 1956): You won’t find any historic realism or ethereal weirdness in this lurid Roger Corman flick. Yet another movie shot on location in the Louisiana bayou, Swamp Women is an action-packed, violent, sexually-charged potboiler about criminals on the lam. A young Mike Conners appears in bondage for most of the film playing Bob Matthews, the hostage of femme fatale Josie Nardo (B-movie queen Marie Windsor). To search for a secret cache of jewels, Nardo and her tough girl crew steal Matthews’ boat after escaping from a women’s prison. The marsh provides a perfect hiding place for the treasure and the film’s tension mounts as they plow the slime ways surrounded by reptilian predators and thick tropical fauna. Inundated by wild forces, the stressed-out bunch is forced to call upon raw survival instincts regardless of the consequences.