Very Much an Excellent Affair

A third Bill & Ted movie decades down the line might sound depressing, but Bill & Ted Face the Music is the exception that proves the rule. B+ 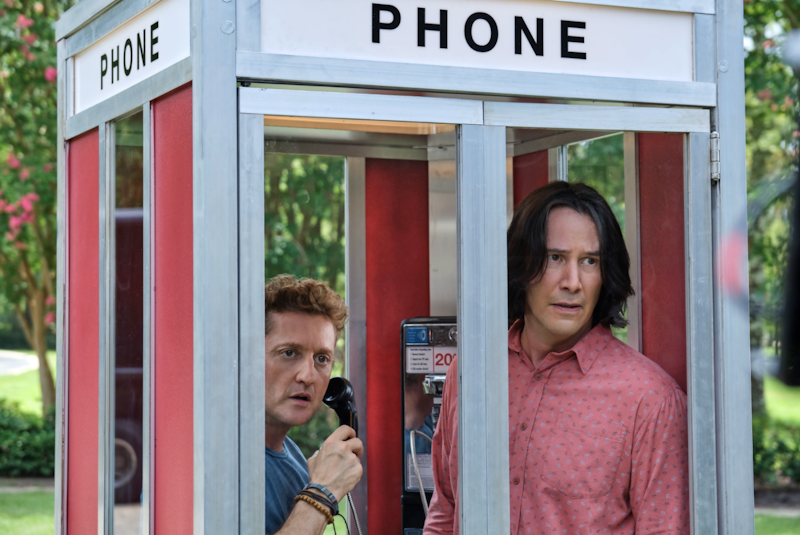 When it comes to Bill & Ted Face the Music, the second sequel to Bill & Ted's Excellent Adventure that's arriving nearly 30 years after the last one, there's one thing that's hard to get past: The Bill & Ted movies are, at heart, about the antics of a pair of goofy teenagers. How can the conceit hold up, when both of them are now 55 years old?

Luckily, the new film, which opens this week on VOD and in movie theaters that are open, has found a way to thread that needle. It's also a charming and clever revisiting of a universe that I was certain had no more worthwhile stories to tell.

The original Bill & Ted's Excellent Adventure, from 1989, was a key part of the sort of dude humor that was prevalent at the time, along with the "Wayne's World" SNL sketches that were later adapted into their own movies. Both were about duos of young men who valued good times, guitar-oriented rock 'n' roll, and the vague notion of "partying," which incorporated just about every stoner touchstone with the glaring exception of drugs themselves.

The first movie took the form of Bill and Ted traveling through time to assemble historical figures (including Napoleon, Socrates and Joan of Arc), in order to pass high school history and avoid Ted's exile to military school, so their friendship (and band, Wyld Stallyns) could continue. The 1991 sequel, Bill & Ted's Bogus Journey, is best known for an extended parody of Bergman's The Seventh Seal, in which William Sadler played Death.

Now, after more than a decade of fits and starts, Bill and Ted are back. Directed by Galaxy Quest's Dean Parisot, the new film, with the exception of plentiful time travel, is set in the present day. The massive quest, consisting a complicated mission to save the world that entails multiple instances of time travel brings to mind, of all movies, Avengers: Endgame. Is it convoluted? Sure. But it's just charming enough to work.

The plot takes on the tiresome cliché that the two heroes are middle-aged men who can't quite grow up, to the consternation of their wives, recast as Erinn Hayes and Jayma Mays. Soon, they receive a message from the future that they need to write and present a new song, within 78 minutes, to save "reality," while also keeping with the earlier films' prophecy that their music will bring the world together.

Bill and Ted are soon traveling further and further into the future, while their respective daughters (Samara Weaving and Brigette Lundy-Paine) time travel to the past, much like the first film, to assemble a supergroup of musicians from throughout history, including Jimi Hendrix and Louis Armstrong.

This structure makes room for some wonderful creativity, especially in multiple scenes in which Keanu Reeves and Alex Winter are interacting with other, future versions of themselves. There are also cameos by almost every actor who was in the first two films—even the late George Carlin, whose Rufus character appears briefly in a projection of archival footage. Of the many new characters, the highlight is Anthony Carrigan (NoHo Hank from HBO's Barry) as a very nervous cyborg.

Reeves may be one of the biggest movie stars around, but Winter has scarcely acted in the last 25 years, and is much better known these days for his work as a documentary filmmaker. Both of them, you can tell, are having a great time. And their enthusiasm is infectious. It isn't often that a movie about teens from 1989 can be successfully updated in 2020, but Parisot, Reeves and Winter have pulled it off.