As theaters reopen in America, Tenet (B+) and The Personal History of David Copperfield (B) are on offer. 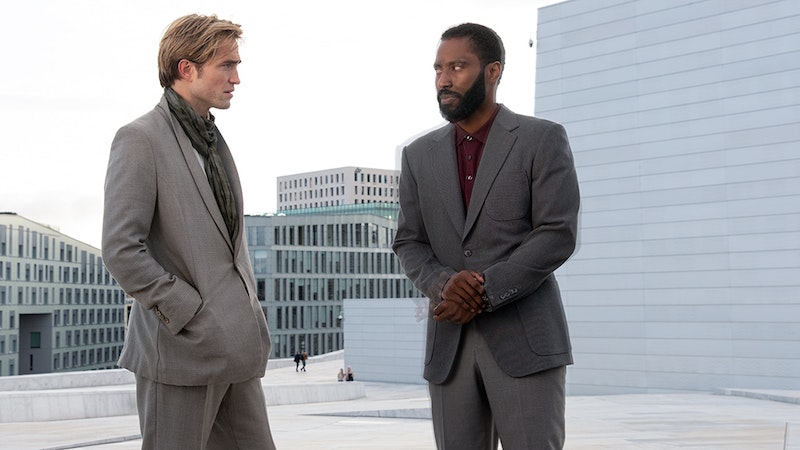 Tenet, director Christopher Nolan's long-awaited new movie, has a lot of the same significant strengths and weaknesses as several of the director's previous films. On the plus side, it's visually stunning, thanks to Nolan and cinematographer Hoyte van Hoytema, and contains some of the year's best action filmmaking. There are six or seven action-adventure set pieces here that belong in the pantheon. The project is ambitious—Tenet was shot in seven different countries—and plays with big ideas, while also making excellent use of talented actors.

But its plot is needlessly complex, and it's the sort of film in which the pieces only fit together once you've watched it twice and read two or three explanatory interviews with Nobel-winning astrophysicists. The sound mix is atrocious, with music and other sounds drowning out the dialogue at several key points. This was a problem in both of Nolan’s last two movies, Interstellar and Dunkirk, and it's an even bigger one here.

While it plays with time much the way Nolan's Memento did, Tenet has the most in common with Inception, which just marked its 10th anniversary. There's also a touch of James Bond mythology, with a spy hero, a Russian villain on a boat, and a narrative that leapfrogs around the globe.

Tenet stars John David Washington as the protagonist, who is only referred to as The Protagonist. A CIA man, he's pulled into a plot that involves villains from the future who’ve found a way to make bullets, cars, and even people go backwards through time. The bad guy is a Russian oligarch and arms dealer, played by Kenneth Branagh. The Protagonist, with some help from his sidekick (a fine Robert Pattinson), tries to get at the villain through his estranged wife (Elizabeth Debicki.)  Tenet is named for the secretive organization that's fighting this evil plot from the future; despite the hero being a CIA agent, it has nothing to do with former CIA director George Tenet.

Nolan's film is best when it's using this time-pending conceit for action scenes. There's an elaborate opening sequence depicting a terrorist attack at the opera, a lengthy highway chase scene in which cars are moving backwards and forwards, multiple fight scenes featuring more than one version of the same person, and different scenes that repeat themselves from different perspectives in different parts of the film. Much like last week’s Bill & Ted Face the Music, Tenet borrows the same “time heist” conceit that was a big part of the plot of Avengers: Endgame.

Washington, best known from BlacKKKlansman, holds his own, in the sort of Nolan role that's usually given to A-list movie stars like Leonardo DiCaprio and Matthew McConaughey. Pattinson shows again that he's the real deal, while Debicki gives the latest in a string of affecting performances. The Nolan perennial Michael Caine shows up only briefly, in a scene that at least allows him to wear a nice suit.

The biggest shocker in the film is that the musical score is credited not to Nolan regular Hans Zimmer, but rather Swedish composer Ludwig Göransson, because it sounds remarkably like the pulsating themes Zimmer contributed to Nolan's Batman films, as well as Inception. The score is so pulsating that it often gets in the way of crucial dialogue.

Whether you can hear it or not, there's too much exposition, a trait common to Nolan’s work. And like Interstellar, while most of this material likely has a passable real-world explanation, a lot of it comes off like unintelligible mumbo-jumbo at the moment you're watching it in the theater.

In the end, for all of its well-rendered action and technical virtuosity, Tenet raises the same question I asked when I reviewed Interstellar six years ago—is it better for a film to shoot for the moon, when it only gets about 75 percent of the way there, rather than aiming lower?

The Personal History of David Copperfield is also out in theaters. It’s an impressively charming adaptation of Charles Dickens' 170-year-old novel, which is equal parts earnest and funny, and sports a fine performance from leading man Dev Patel. The Copperfield film looks gorgeous, with beautiful cinematography, and a slickness that isn't what most would associate with the word "Dickensian."

But what’s especially jarring about the film is that it comes from director Armando Iannucci, best known for such profane and satirical works as The Thick of It, In the Loop, Veep and The Death of Stalin. The film is funny, no doubt, and even features Peter Capaldi and other actors long associated with the filmmaker. It just doesn't feel anything like Iannucci's work.