On Satan's Brew, a German cousin of John Waters soaked in fluid mania. 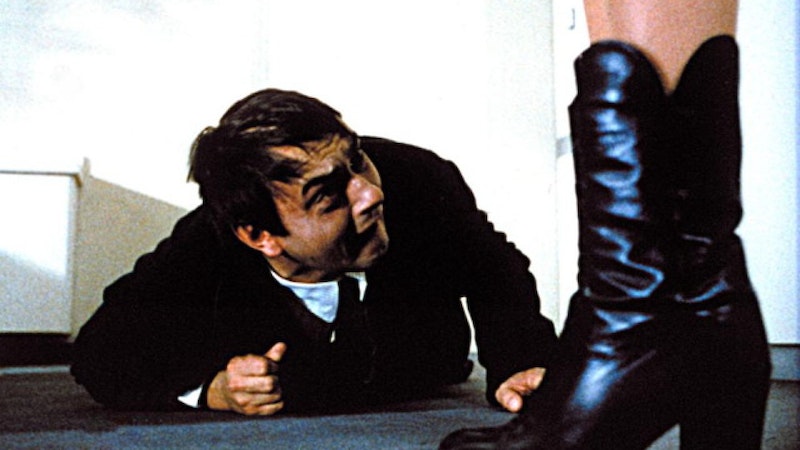 Rainer Werner Fassbinder was a Gemini: it’s not his fault he experienced severe mood swings lasting days, sometimes weeks. He was difficult, tumultuous, manipulative, and at times impossible to deal with. He played mind games with his friends, chess pieces on his board. His world was filled with sex, drugs, lust, longing, and failed romance. He dove headfirst into everything, whether it was writing and filming a 15-hour mini-series or arranging his per diem to be delivered in through a producer like Michael Fengler. Fassbinder was a master at of the craft, arguably the greatest German filmmaker of the post-war era and maybe one of the greatest of all time. No director could articulate the deep coldness within humanity better than Fassbinder.

Satan's Brew is my favorite Fassbinder film. Not widely recognized or known (even within Fassbinder's extensive filmography), this underrated sadistic gem follows writer Walter Kranz (Kurt Raab) as he struggles with writer's block, unable to find inspiration for his next work of poetry. The film not only showcases Fassbinder’s overlooked gift for slapstick comedy, but builds on the dark, twisted psychological humor that runs through all his work. But Satan's Brew isn’t a slow burn. The first scene begins with Kranz banging his head into his publisher's door. It quickly moves to levels of absurdity. Using the Marx brothers and The Three Stooges pitches and tones, this film flips physical comedy back to the Vaudeville and Antonin Artaud.

Satan's Brew is reminiscent of early John Waters multiplied, more insane yet more put together and arranged. (Waters is a huge fan, regularly recommending Fassbinder’s films and writing about the late filmmaker). Instead of the characters cranked up on meth, everybody looks like they’re tripping on mean acid. It's not a good trip. When Kranz finally finds inspiration for his new piece of writing, he quickly realizes that it's plagiarized from acclaimed writer Stefan George. Guided by his expanding ego, Kranz becomes an “adaptation” of George. Meanwhile, a cop is on his trail, suspecting Kranz of a murder that took place in his apartment complex. Kranz did commit the murder, but only out of a sexual fetish insisted by the victim. She was asking for it—and that’s okay!

The attitude of Satan's Brew is similar to other Fassbinder movies: cold portrayals of humanity, distant characters, detached dialogue. The characters are unsympathetic, robotic, and cruel. Kranz's brother (Volker Spengler) is obsessed with collecting dead flies, only to figure out a way to have sex with them while Franz's wife is cuckolded by her husband. Themes of abuse and power ride throughout. Kranz is a nihilistic character who only exists in a nihilistic film. He meets another lover, a virgin (Margit Carstensen) who idolizes Kranz for his writing. Kranz, however, prefers to use her as a seat. He watches as his brother spits scrambled eggs into her face. The eggs then take half of the film to fall off her face. Every character acts entirely on base instinct and carnal desires; they’re animal-like. The film abandons all rules: Satan's Brew is Fassbinder's hallucinatory journey through hell.

Filmed in the middle of his career—1976—Fassbinder shows he has nothing to prove to anybody. He's making the films he chooses to make. Six years later, he was dead at the age of 37. Alongside his German contemporaries Werner Herzog and Wim Wenders, Fassbinder helped give Germany its own “new wave” to rival that of France, Britain, Italy, and America. At some level, every filmmaker aspires to create something as sui generis even as Fassbinder's worst films—but Satan's Brew isn’t chaff, it’s one of his overlooked masterworks on madness.