Ships That Gab in the Night

One Night in Miami is a fine adaptation of a play based on a true story: when Mohammad Ali, Malcolm X, Sam Cooke, and Jim Brown hung out in 1964. A- 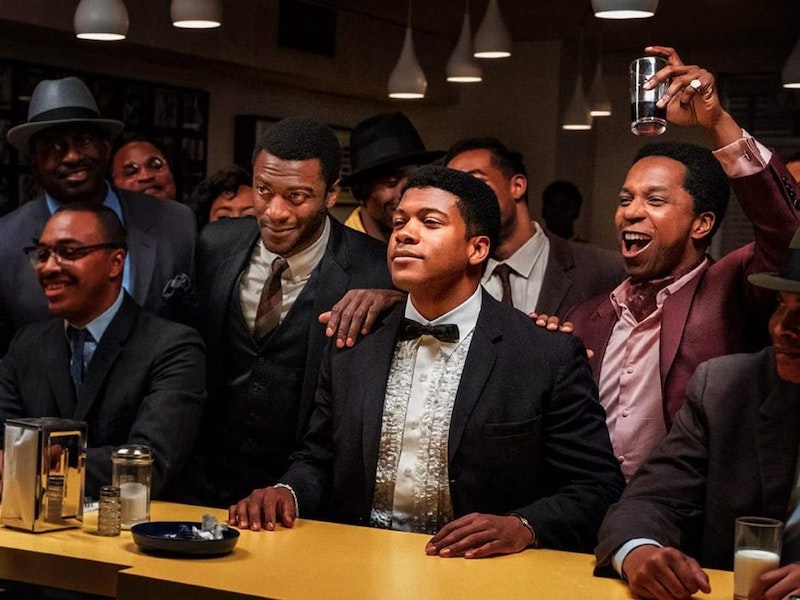 Sports fans who claim to miss the "good old days" when athletes "stuck to sports" might have some of their assumptions challenged by One Night in Miami, a new film that had one of its first U.S. showings at the drive-in portion of the Philadelphia Film Festival. Adapted from a stage play of the same name by Kemp Powers, who wrote the screenplay, One Night in Miami represents the directorial debut of actress Regina King, although King has directed several TV episodes over the years. Currently on a festival run, One Night in Miami will land in theaters in December, before hitting Amazon Prime.

One Night in Miami is set on the night in February 1964 when the man then known as Cassius Clay won the heavyweight championship from Sonny Liston. This isn't a really a sports movie, though, as we only see a few minutes of the fight. The bulk of the film is a long celebratory meeting in a hotel room that night, among four black American icons: Clay (Eli Goree), Malcolm X (Kingsley Ben-Adir), Sam Cooke (Leslie Odom, Jr.), and Jim Brown (Aldis Hodge, who co-starred with King in both The Leftovers and Watchmen).

The four men are known to have hung out together that night, although what was actually discussed likely remains lost to history (Brown is the only one of the four still alive). The dialogue has the four men discussing and arguing about a long list of topics with continuing resonance, from racism to racial identity to the question of selling out to how much famous black men should speak out about social issues. That last argument, which lends the film its best scene, is like the Michael Jordan "Republicans buy sneakers too" controversy, 30 years in advance.

At the time of the film's events, all four men were on the cusp of major life changes. Clay was about to announce his conversion to Islam and change his name, while Malcolm was on the verge of breaking with the Nation of Islam. Brown was about to quit football to try his hand at movie acting, while Cooke was considering making more socially conscious music. Cooke and Malcolm would both be dead within a year of the movie’s events.

The film has one big strike against it: Whole biopics have already been made about some of these men, most notably Spike Lee's Malcolm X and Michael Mann's Ali, and those films included definitive performances, respectively, by Denzel Washington and Will Smith. The Mann film, like King's, begins with the Liston fight, details the Ali/Malcolm relationship, and even includes the same song by Sam Cooke that serves as the emotional climax of One Night in Miami. All four men have also all been the subject of documentaries, including Spike Lee's about Brown, and I think by this point Muhammad Ali has had more docs made about him than he had fights.

The film, though, finds a worthwhile angle, and the cast, while unheralded, is more than up to the task. Odom, last seen in Hamilton earlier this year, is a natural fit for Cooke. Hodge, amazing in the "Hooded Justice" episode of Watchmen last year, is a convincing Brown, while relative newcomer Goree shows us a different Ali than we're used to. Ben-Adir, a British actor, played Barack Obama in the recent Showtime miniseries about James Comey, which is an iconic pair of roles within one six-week period. He won't make anyone forget Denzel Washington, but his version of Malcolm is a compelling and tragic figure.

The supporting cast includes Lance Riddick as a Nation of Islam member, Beau Bridges in a gut-punch of an early scene, and The Sopranos' Michael Imperioli, in a small role as Ali trainer Angelo Dundee. With One Night in Miami, Regina King has made an historical film of resonance, and showed more potential her first time out as director.