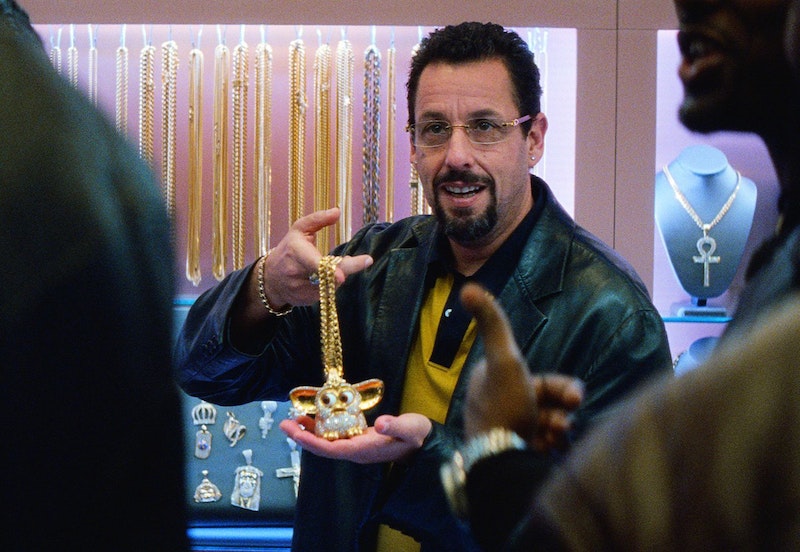 Going in, I didn’t think the Safdie Brothers’ fourth film, Uncut Gems, could live up to the hype it received after premieres in Toronto, New York, and London earlier this year. Reports from TIFF found people “transformed,” Robbie Collin of the BBC said it felt like being "dangled over a pit of crocodiles," and he’s not wrong. My mom left an hour in because it was making her blood pressure go up. She’s a veteran moviegoer, and sees everything. I can’t think of the last time that happened.

Adam Sandler stars as Howard Ratner, a jeweler in the diamond district running every grift imaginable, “borrowing” pieces here and there so he can afford a priceless opal gem from Ethiopia. Mined by African Jews, it’s this rock’s mystical powers that unite Ratner and Boston Celtics star Kevin Garnett, playing himself here in an impressive film debut. “KG” comes into Ratner’s store one day looking for watches, and Ratner can’t resist showing him the opal gem. Most of the movie takes place in the spring of 2012, and the run of games that Garnett plays actually happened. Garnett insists on borrowing the gem for good luck—lo and behold, he has an extraordinary game. When he returns it, his next game goes terribly. Later, they meet again, after a never-ending series of quests to pick up this bag of cash, this Rolex, this priceless championship ring, all in order to auction off this opal gem that unites Ratner and Garnett. In this gem, they see their roots and the history of their oppression, mined by African Jews in Ethiopia.

This is the conversation that has already been widely memed: Garnett asks Ratner why he’s gone through so much trouble and danger for a fucking rock. Ratner, echoing Tom Sizemore’s character in Heat (“The action is the juice”), tells Ratner this is his game, and “This is how I win.” And in a way, he does. I don’t think the shocking ending is sad, far from it—Ratner dies at the absolute happiest moment of his life. After pulling off those insane parlays and bets on bets on bets, all on the phone via his mistress (Julia Fox) at Mohegan Sun in Connecticut, he probably came in his pants. Earlier in the movie, when he thought he won a smaller but still substantial bet, he told his chauffeur, “Holy shit I’m gonna cum.” When that thug shoots Ratner point blank in the face, Ratner’s beaming ear to ear. He’ll never top that moment, and he dies at his happiest. It's a beautiful ending, for him.

At the end, my dad turned to me and said, “I didn’t enjoy one minute of it, but that was a great film,” and compared it to Martin Scorsese’s overlooked nightmare comedy After Hours. But what I see in Uncut Gems is the spirit of Robert Altman. A lot of people I’ve talked to found the Altman comparison superficial or totally off the mark, but I don’t know how you can miss it: the roving anamorphic eye of the camera, the blend of movie stars and non-actors—real people—to create a hyper-real American milieu we all recognize as incredibly specific but nonetheless elusive.

Sandler has been better just once before, in Punch-Drunk Love, a film that hasn’t aged well, but lives on through Sandler’s career performance as Barry Egan, a repressed and regressive man in his mid-30s, the only boy among seven sisters who all torment him and constantly call him a faggot and retarded. What begins as an explosive and chilling character study devolves into slapstick once Sandler and Emily Watson’s character start dating. It’s a nice movie, but Sandler showed so much talent he rarely displayed in the 17 years since. Howard Ratner in Uncut Gems is another tour de force performance, an iconic character. This is what this man should be doing. Please finish out the Netflix deal, Adam, and give yourself to the world. Towards the light, the known and unknown universe, all within the opal gem…

This is how you win: the critique is embedded in the narrative. Uncut Gems is a great film because it makes you feel something: anxiety, high blood pressure, heart palpitations, excitement, unconscious vibrating. Unlike Goodfellas, Wall Street, or The Wolf of Wall Street, there’s no confusion in the anti-hero’s fate—everything in this film is leading up to those final five minutes. Structurally, it’s pretty unusual: no breaks, no down time, and aside from one astonishing scene between Sandler and Fox where he breaks down with toilet paper sticking out his nose, there’s no reflection. There’s no time for any of that.

Good Time was often too dark and claustrophobic to become really immersive, but it was obvious whatever the Safdies did next would be interesting. It’s remarkable how consistent the stakes in their films have remained: in all four films, we follow a person in New York who, in trying to survive, endangers their lives and the lives of their friends and family. These aren’t all crime films: Daddy Longlegs, their debut, is a Brooklyn comedy about a single dad (played by Ronald Bronstein, who has the energy of a benevolent Vincent Gallo). Heaven Knows What is not a crime film—heroin addicts break the law but their habit isn’t violence.

Uncut Gems is a major film, one that confirms the Safdies as eminent American directors. I’ve seen plenty of comparisons to Scorsese, Abel Ferrara, even James Toback. I think these are too reductive, because crime does not define the Safdies’ work. They only have four films, and the through line is their societal critique: these people have put themselves in extremely difficult and high pressure situations not because they are bad people, but circumstances beyond their control have forced them into action and illegality.

More than any programmatic or allegorical critique of American society in the 21st century, the Safdies strike at the core of the problem by presenting the system as it is, implicit in every scene. Again, this is how you win as a filmmaker: Uncut Gems is an astonishing movie because it forces the audience to go on this insane run with Howard Ratner, and when he dies in bliss, we’re left holding the emotional bag. We never see what happens to his family, his mistress, or his friends. As the camera makes its way through the hole in Howard’s head, his brains, and eventually outer space, the audience must ask themselves: what was all that for? And the answer is the same as Elliott Gould’s at the end of California Split: “Don’t mean a fucking thing, does it?”