Dolemite is My Name celebrates the American Dream and those who pursue it with open hearts. 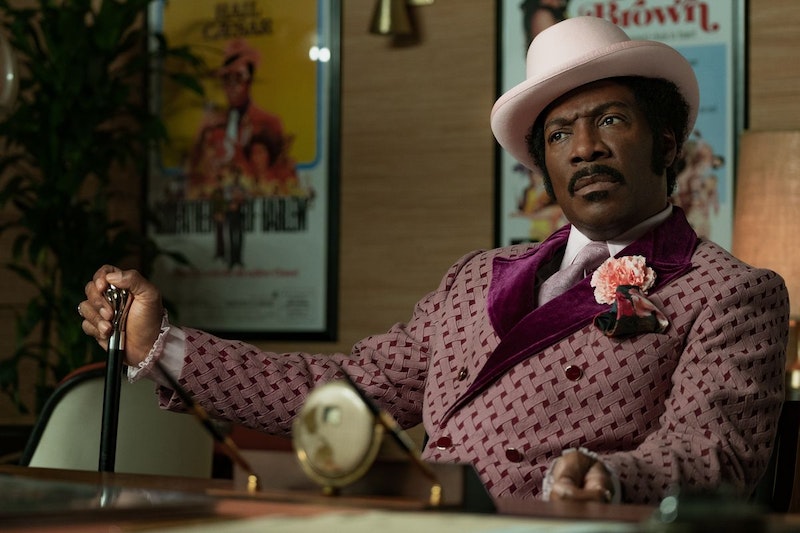 “Dolemite is my name, and fucking motherfuckers up is my game!” With this exclamation, comedian Rudy Ray Moore began his stand-up comedy career. Moore, who was known for his brand of raunchy humor, created the character, Dolemite, an over-the-top pimp and hustler. This persona grew so quickly and people (mostly the black community) loved it so much that Moore went on to record his stand-up routine, which was very successful. But Moore didn’t stop there—he was determined to make a film in which Dolemite was the main character, and not only that, he was the hero everyone needed.

Moore’s story was made into a film, Dolemite is My Name (Netflix, 2019), with Eddie Murphy as Moore. Murphy was nominated for a Golden Globe in the category of Best Actor (Comedy), and given the brilliance of his performance I wouldn’t be surprised if he’s nominated for an Oscar as well.

The film follows Moore’s beginnings as the sales manager in a record store and an MC in a club. The club manager allows Moore to do a short stand-up routine before the main act enters the stage. His humor is weak, composed of one-liners that no one wants to hear. It’s not until Moore creates the persona of Dolemite that he begins to flourish.

Murphy portrays him as a restless man, always on the verge of some discovery, always seeking another way to succeed. Moore never gained any mainstream success, but his work made an impact on black culture, especially rap. This, however, isn’t the film’s concern at all. Rather, it’s the journey that Moore goes through in order to make the film Dolemite.

Moore’s crew is made up of people just as quirky as he is: a single mother, Lady Reed; musician friends responsible for the film’s music; Jerry Jones, a serious playwright who’s more concerned with an artistic output that changes and uplifts the black community but settles for writing a blaxploitation script; UCLA film school students; and actor D’Urville Martin (played brilliantly by Wesley Snipes), who serves as the villain of the film as well as its director. Martin appeared as the elevator operator in Roman Polanski’s Rosemary’s Baby (1968), a fact that he keeps reminding everyone of throughout the film.

As is expected, the crew runs into monetary difficulties but Moore’s persistence pays off. The film’s a huge success in every way. What made Dolemite so fascinating and different among other blaxploitation films was its humor. Any grindhouse film is bound to be “bad.” After all, the budget is low and the talent is mostly made up of people of a lower cinematic echelon.

At the time Dolemite was made, blaxploitation films were very popular, partly because of actors such as Fred Williamson (Black Caesar, Hell Up in Harlem) and Richard Roundtree (Shaft). In many ways, the response was directly related to the state of the black communities at the time and lack of powerful black characters in mainstream films. Black actors were cast in minor roles that generally perpetuated cultural stereotypes or rendered them insignificant. Ironically, the original intent of blaxploitation films was met with much criticism because it created a different set of stereotypes.

This rejection is what makes Moore’s approach to Dolemite very different, and perhaps it’s because of this that the film exceeded expectations. It was popular with both black and white audiences. Most of it was accidental—at least this is how Murphy portrays it. Murphy’s Moore didn’t know much about filmmaking but he knew that his film shouldn’t be serious and so he opted for humor—something he was comfortable with.

As much as there are plenty of funny moments, especially since Murphy himself is a comedian, this was different than what the audience might expect from Murphy’s comedic persona. He brings out Moore’s interiority and the constant forge ahead aimed at fame and success. We see glimpses of his hatred for his stepfather who abused him, both physically and emotionally. We’re left wondering whether the “motherfucker” that Moore is “fucking up” is really this man who beat him, belittled him, dehumanized him.

One of the pleasant surprises of Dolemite is My Name is the lack of ideology. There was no intent to bring awareness to one issue or another that’s happening currently in our culture. Rather, it’s firmly planted in the culture of the 1970s, and this is another aspect of the film that gives it great credibility and treats it as a film that should be taken seriously. We not only have a close look at Moore’s life but also the social and cultural environment of the 1970s.

The highlight of the film is Murphy’s performance. If you’re looking for the “Eddie Murphy” film, along with that wonderful trademark laughter, you won’t find it here. Murphy becomes Moore, and it’s clear that he put every effort that’s within him to show the significance of Moore that goes beyond his role as a raunchy comedian or a blaxploitation star. Grindhouse films aren’t mainstream and only a small community of fans knows and appreciates the genre. But such knowledge isn’t needed in to see the value of Dolemite is My Name. Every character brings a sense of humanity, determination, and striving toward a better life. They all acted on these American Dreams, however bizarre the business they were in was, and that’s something that everyone who is striving to succeed can appreciate.