Woody in the Doghouse 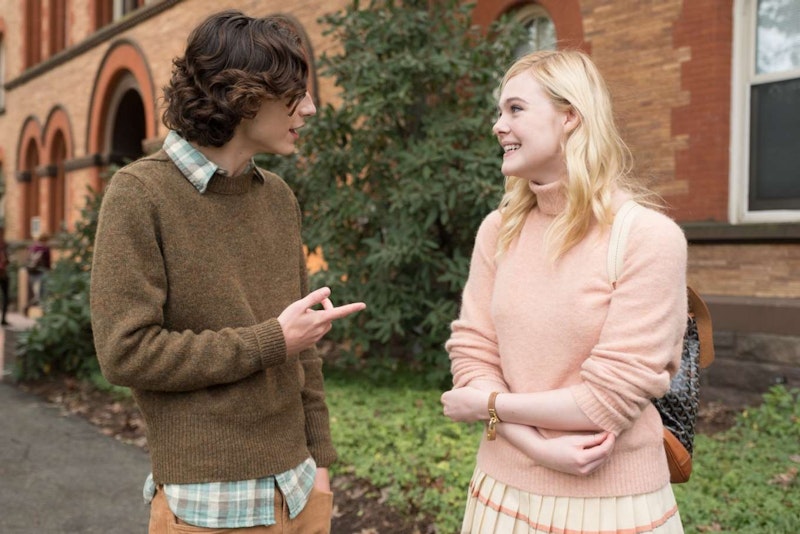 Janet Maslin tweeted this last Friday: “Just watched ‘A Rainy Day in New York’ on YouTube. That’s the 2018 Woody Allen film so horrifying that no American distributor would touch it and actors who’d worked for Allen apologized, gave away their salaries or both. Chalamet’s lovely in the lead, however sorry he may be… Expect the expected when it comes to hating this thing. But some day the level of hysteria will seem mystifying. Very. Don’t @ me. Just ignore it. Easy.”

You can imagine what followed: variations on “why would I support a living abuser?” and armchair film crit. Somebody responded, “Six minutes in (they’ve just arrived at the hotel) and I’m already cringing at Chalamet’s turgid interpretation of the director’s cadence and the pomposity of the writing. This already may be the worst New York movie I’ve seen since Chelsea Walls.” Maslin gave the only sane response: “So turn it off.”

I was able to watch A Rainy Day in New York late Friday night before it was taken down in the morning. You can still find it out there, but is it even worth a 10-minute cursory Bing search? Google is in cahoots and has the same DMCA algorithm as the YouTube it owns. I think if you've seen Allen's work out of habit or loyalty every year, then yes, look out for A Rainy Day in New York. If you see as many shitty, unremarkable movies as I do, the particular mediocrity and blindingly awful dialogue of Woody Allen’s 21st century-films are actually more interesting than the umpteenth war period piece starring Keira Knightley.

A Rainy Day in New York already has an advantage over Allen’s previous two films: it takes place in contemporary New York, the perfect milieu for Allen to demonstrate how out of touch he is. Brimming with stale confidence, intimacy, and understanding of a city he hasn’t understood in decades. In his movies, teenagers talk about Grace Kelly, Gone with the Wind, and obscure Broadway bookies. It’s completely ridiculous; his screenplays would fail an NYU freshman. An early Chalamet line: “Anyway, I decided to treat myself to a cigarette holder, which makes me look dapper.” Chalamet’s character—named “Gatsby Wells"—runs into a friend on the street early on: he warns Gatsby about his girlfriend (Elle Fanning) spending too much time with a big-shot director played by Liev Schreiber and his screenwriter, played by Jude Law. The friend, after making some small talk about med school and “getting in with the board at Grenada,” tells Gatsby that, “With that cigarette holder, you could be the perfect milquetoast nerd!” That kind of stuff makes me understand the appeal of Mystery Science Theater 3000, however briefly.

Allen’s film isn’t much better or worse than the last dozen movies he’s made, so why all the fuss? Apologies from actors, and criticism of actors like Anjelica Huston who said they’d work with Allen despite the allegations, make this movie seem a lot more controversial than it is. It’s a victim of circumstance, and no one can say it’s a tragedy that this movie likely won’t see legitimate release in North America any time soon, except on principle. These late-career Woody Allen movies aren’t irredeemable garbage or thoroughly unremarkable (the all-star ensemble casts and awful dialogue make these films completely unique: the only reason these talented performers are in this is because of the director’s name).

Censoring A Rainy Day in New York because of allegations against the director is a completely arbitrary, en vogue decision that obviously doesn’t apply to the rest of the industry: I saw a trailer before Queen & Slim for a new submarine thriller called Underwater starring Kristen Stewart and T.J. Miller, a #MeToo casualty who was accused of beating women and driving drunk. Where’s the opposition there? And the reinvigorated love for Joe Pesci, who told Dave Chappelle to "NEVER EAT PUSSY"? I guess not enough people know about that, or care about Pesci. Because as long as I’ve been alive, Allen’s best known in pop culture as a lascivious pervert at best and child molester at worst. It was Michael Jackson without the drug addiction and a better work ethic.

This isn’t a defense of Allen, but a defense of his work. I agree that independent and arthouse theaters should book more diverse programming, and I wouldn’t mind Allen’s movies disappearing if dreck like After the Wedding, The Aftermath, Victoria and Abdul, The Leisure Seeker, and Paris Can Wait were denied entry as well. What’s the conflict? Well, those movies bring the bluehairs. But so did Allen: I’ve seen every new movie of his for over a decade, and those theaters were always packed with people full and sedated by the Blue Light Special they just had. Those Wonder Wheel matinees were full of retirees. They’ll see anything with a vague point of interest: namely, one of the World Wars, the British monarchy, and Woody Allen.

So please, go on denying that Woody Allen and his movies exist. Just get rid of this TV movie crap and bring more challenging and unusual films to the screen, like The Peanut Butter Falcon, Honey Boy, Rafiki, Capernaum, Honeyland, The Last Black Man in San Francisco, and Transit, to name a few off the top of my head. I didn't even like all of those movies, but they were made by people that don't get as many chances, if any, to distribute their work. Someone like Allen doesn't even have to try, and while I admire his work ethic, he's not reinventing himself or even varying his schtick (other octogenarian directors like Jean-Luc Godard, Agnès Varda, and Clint Eastwood made distinctly different work in their old age). His recent films are bad, but they're rarely boring because they're often very funny, however unintentionally. Again, I will take that over another fucking World War II movie.

Allen can always be depended on for howlers like this, though—Elle Fanning, hiccuping and unspeakably horny, having dinner with Diego Luna: “I shouldn’t imbibe so copiously.” Chalamet: “I need a drink. I need a cigarette. I need a Berlin ballad… I just like to watch old movies and play my vinyl.” Again, anyone with a brain can see that A Rainy Day in New York is a first-draft script performed by stellar actors with great cinematography. It’s a total fluke of Allen’s work ethic and reputation. These films don’t take long to make, actors get to work with many major peers—ensemble casts like these are rare, right now I can only think of Rian Johnson’s Knives Out, a very good movie by a filmmaker in the thick of his golden years. It seems obvious that actors work with Allen for the notch in their belt and the opportunity to collaborate with many other talented actors of different generations. These aren’t morons; they must know these scripts are terrible.

There are thousands of movies worse than A Rainy Day in New York, many far more offensive (Green Book won Best Picture less than a year ago), not to mention ethically vacant propaganda like Zero Dark Thirty. But Woody Allen is easy: he’s a caricature, he’s his own worst enemy (“the heart wants what it wants”), and his movies aren’t good enough for really fight for. But the hypocrisy in the condemnation of A Rainy Day in New York shows how arbitrary the targets of the #MeToo movement are.