Soylent Green is More Than a Meme

Richard Fleischer's 1973 cult classic, now on the Criterion Channel, is deeper than a catchphrase. 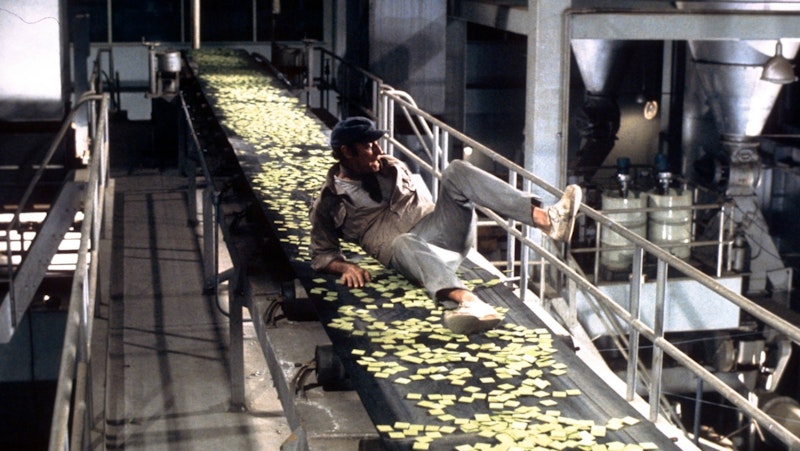 Soylent Green survives in the popular consciousness as a single line shrieked by star Charlton Heston. But he delivers the line in a way we don’t remember: delirious, wounded, semi-conscious. And while the movie builds up to it (no spoilers for 1973), when I watched the film in the Criterion Channel’s 70s science-fiction collection, I was surprised and pleased to find more going on than just what’s conveyed by the one bit of dialogue.

The year is 2022, and the population of New York City is 40 million. We follow a cop, Frank Thorn (Heston), as he tries to solve the murder of a rich man, William Simonson (Joseph Cotten), killed in his apartment high above the overcrowded city. We’ve seen the murder committed, we know there’s a conspiracy involved, and we watch Thorn and his researcher Sol Roth (Edward G. Robinson, in his last film role) as they try to solve the crime—and to work out what the killing has to do with Soylent Industries, which controls the food supplies for half the planet and who’ve recently introduced a new product, ostensibly made from plankton. Does Soylent Green hide a darker secret?

Yes, but what’s interesting is that the secret doesn’t feel like the heart of the story and its exposure doesn’t feel like the magic-bullet solution that’ll fix the world. The film was directed by Richard Fleischer, son of animator Max; by 1973 his resume included The Vikings, 20,000 Leagues Under the Sea, and Fantastic Voyage. The screenplay, by Stanley R. Greenberg, was based on Harry Harrison’s 1966 novel Make Room! Make Room! The story’s fairly straightforward, but the direction’s effective at building a rundown and overfull world, a world in which things are slowly wearing out under the burden of too many people.

A sickly green mist hangs over every exterior daytime shot of New York. Dialogue establishes that it’s always too hot—in 1973 they understood the general idea of the greenhouse effect, I suppose, but not how it’d actually work. At any rate, this 2022 imagines people everywhere, living in staircases, queuing for distribution of food. There aren’t jobs for most of the population, but the rich can afford surprisingly small luxury apartments of their own, complete with living “furniture”—sexual partners.

There’s a proto-cyberpunk feel to the world, a cyberpunk without computers. Heston’s Thorn feels a little like Rick Deckard in Blade Runner, wandering a future city trying to unravel a knotty mystery involving corruption in high places. This movie’s nowhere near as visually stylish, but the sense of a consistent future with its own logic is similar. There’s just enough about economy and technology and ecology to get across what we need to know and why people act the way they do, and it adds up to something convincing.

If the characters aren’t quite fully three-dimensional, they at least have a good two-and-a-half dimensions. Thorn’s technically a corrupt cop, for example; investigating the murder of a rich man in a rich apartment, he casually helps himself to the foods and goods scattered about. But it’s theft that’s taken for granted, part of how law enforcement works in this 2022. It tells us that this is a fundamentally corrupt society, and even a decent man like Thorn is corrupted along with it.

There’s a sensation peculiar to science fiction, when you see or read a story from the past that almost gets the present right. But it gets the broad strokes. It imagines a world struggling with themes that we’re struggling with now, not prophecy but a striking extrapolation. So here we see the manager of the dead man’s building berate and attack the women who the building pays to sleep with the tenants, and they can’t stand up for themselves because they’re too afraid of losing their jobs in a society where there isn’t enough paying work to go around. There’s something familiar about this kind of exploitation and abuse of workers, something that harmonizes with the present we’ve ended up with.

The film has problems. There’s a scene of a food riot that works until heavy equipment’s called in to scatter the rioters, and the equipment turns out to be dump trucks with loader shovels. A crucial bit of scientific information is hidden from the public in a way that’s improbable; there’s a lack of books, libraries, and scholars that’s baffling. On a more trivial level, Simonson’s live-in prostitute Shirl (Leigh Taylor-Young) plays a home video game early on, and not only does it have a cabinet like the old arcade games, it actually is an old arcade game. Like hairstyles and fashions, it’s too 1973.

More seriously, Simonson the rich man, lives in a smallish apartment. The rich generally are closer to a middle-class character like Thorn than feels credible. And we don’t see enough of them, really; on a plot level, the conspiracy is too obvious and simple because we don’t get a sense how many people are in on it.

But you can only fit so much into a movie, and Soylent Green does a solid job of showing us a range of locations that help build the world. The down-at-heels cop shop where Thorn works has real character; cracks in the glass of the windows, everything battered and half-busted. We see a church, crowded with people seeking somewhere to sleep, and we see overworked clergy dead on their feet. There’s a special institution Sol Roth visits near the end that’s one of the few well-kept buildings in the city, and the kind of place it is tells us what’s valued in this world.

The plot’s not especially memorable, but moves well. And it provides a structure for character bits that genuinely work, the relationships of Thorn with Roth or Shirl, or Roth’s final resigned act that’s a sort of rediscovery of his values. The movie fuses the police procedural into the science-fictional dystopia smoothly, and a wordless action scene near the end involving Heston sneaking into a high-tech facility successfully conveys suspense even though there’s not much actual drama.

As science fiction Soylent Green’s not as cerebral or individual as Stalker, say, or A Clockwork Orange. But it’s convincing, because there are deeper problems with the world it imagines than the murder of one rich man, deeper even than one conspiracy surrounding new foodstuffs. The movie’s smart enough to end in the right place, not to have things be solved by the exposure of the conspiracy. The problems with the world go farther than individual acts of wrongdoing, or even a single conspiracy. That’s very 2020, but it was very 1973 as well.