Fast & Furious Presents: Hobbs & Shaw is a refreshingly paired down spin-off of the extremely popular mega-franchise. B+ 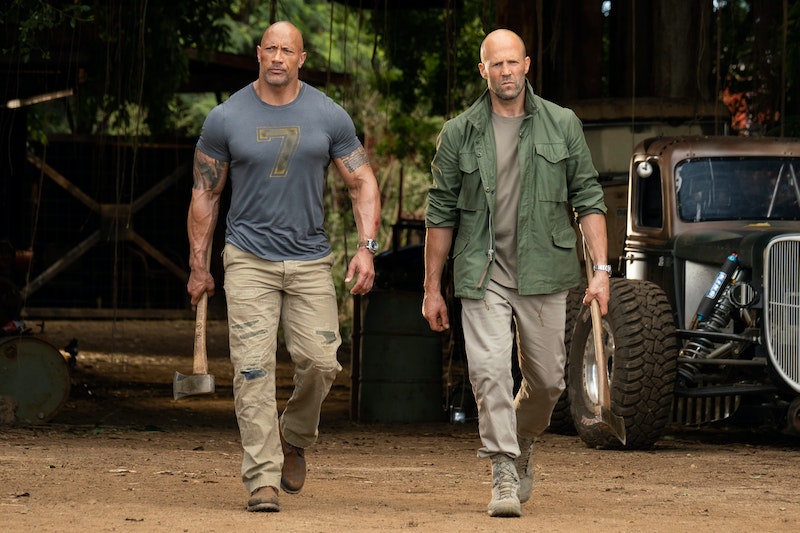 David Leitch has quietly emerged in the last five years as one of the best working action filmmakers, as the uncredited co-director of the first John Wick movie, and the full-on director of both Atomic Blonde and Deadpool 2. Leitch is an ex-stunt double, and while his films are known for their expertly blocked action sequences that lean heavily on hand-to-hand combat, they don’t ignore character work.

As the director of Fast & Furious Presents: Hobbs & Shaw, the first spinoff of the action-adventure franchise, Leitch appears at first to work in a style more informed by his own previous work than by the traditional contours of this franchise. For the first act, at least, there's more one-on-one fight scenes and character banter, and less of the sort of vehicles-flying-through-the-air-and-blowing-up-real-good content that's long been synonymous with the Fast & Furious movies.

But the flying cars eventually come, and they don't disappoint.

The new film doesn't break any new ground, and at times it gets away from its core strengths. But Hobbs & Shaw does enough things right to remain worthwhile, and as the ninth film in a series, that's an achievement.

Hobbs & Shaw has those two characters, Dwayne "The Rock" Johnson's American agent and Jason Statham's British mercenary, breaking off from the main group, as the mismatched partners are forced to team up against a technology-enhanced supersoldier (Idris Elba.) The bad guy, backed by mysterious forces, has both a plan to use a virus to wipe out much of humanity, and also a long-winded, Thanos-style justification for doing so.

For roughly its first half, Hobbs & Shaw is a buddy cop comedy in which the two cops hate one another, and it works swimmingly. As the film goes on, it adopts more traditional Fast & Furious material, including a nifty chase scene down the side of a building, a car chase through the streets of a London, and a complicated escapade involving a power station in Ukraine.

Vin Diesel and the rest of the crew might be absent—likely due to his and Johnson's reported behind-the-scenes feud—but the notion of "family" is still ever-present. Along for the ride is Hattie (Vanessa Kirby), an MI-6 agent who happens to be the Statham character's sister and matches both male stars in the ass-kicking department.

We also, in a Samoa-set third act, meet several siblings of Hobbs', including Cliff Curtis (who sports a beard that makes him uncannily resemble Colin Kaepernick) and the pro wrestler known as Roman Reigns, Johnson's real-life cousin, who makes quite a physical impression in what's essentially a non-speaking role. And the Samoan brothers just happen to own a business that does international exports of souped-up cars.

But the highlight of the film, no doubt, is Johnson and Statham going at each other, both with their fists and words. The film was written by series veteran Chris Morgan along with Drew Pearce, from a story by Morgan. For both structure and dialogue reasons, I've always found the writing in the series the most underrated element.

Elba is a first-rate villain, adding some full-on sci-fi to a series that's mostly only hinted at it. Another highlight is Eddie Marsan, as a Russian scientist, who’s responsible for the second-greatest strategic use of a flamethrower in any movie this summer.

It's a relief to narrow down the franchise's massive cast and focus on only two of them, although one gets the sense that the feeling is fleeting, as a proper Fast & Furious 9, with Vin Diesel and company, is in production for a spring 2020 release.