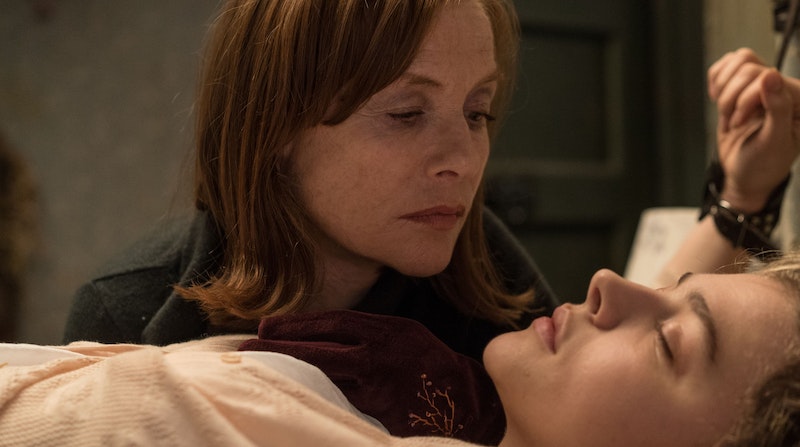 With the intriguing promotion and mixed reviews for Greta, one wonders where director and co-writer Neil Jordan could’ve gone wrong. Isabelle Huppert and Chloë Grace Moretz star in a cat and mouse psychological thriller—how could any filmmaker screw this up? Unfortunately, Greta’s problems are evident from the jump: this movie has some of the worst, most ham-fisted dialogue delivered by accomplished and versatile actors I’ve seen in a long time. And delivered poorly, but what could be done with such a stilted and clunky script? Not much: Huppert and Moretz soldier through Greta with commitment and pulp vim and vigor, proving their mettle in a bad movie as much as they usually do in much better movies.

Take Elle and Clouds of Sils Maria. The former, Paul Verhoeven’s 2016 rape rollercoaster, had Huppert in a space that Greta aims for and never reaches: brutal violence cut with pitch black comedy, Huppert’s titular character wearing that same withering gaze of indifference and mild disdain familiar to many of the roles she’s played. And in Clouds of Sils Maria, Moretz fit perfectly in the milieu of rich European and American expatriate teenagers and mild celebrities that Greta tilts towards with its chi-chi upper-crust Manhattan setting. Huppert and Moretz are only ciphers of former better selves in Jordan’s film, making its incoherence and lack of suspense all the more disappointing.

Moretz plays Frances, a young woman just out of college, waiting tables, and staying with best friend Erica (Manika Monroe) in her multi-million dollar Tribeca loft (“My dad bought it as a graduation present and thought I should wear it in”). One day on the subway, Frances notices a forgotten bag, takes it with her, looks at the ID, and contacts its owner, Huppert’s Greta, and schedules a meeting to return it. Erica’s mildly horrified (“When you see a bag on the subway, you call the bomb squad”), but Frances says, “Where I’m from”—Boston—“you do this sort of thing.” Who knew Boston was brimming with good Samaritans? This is a sign of things to come, because Greta is filled with this flowery writing that always sits at the top of the picture and can’t be ignored.

Of course Greta is an insane old woman who leaves identical bags on the subway all the time in order to kidnap nice little girls like Frances so that she can stalk and eventually imprison them. Why? Who knows—Greta had a daughter at some point, and she’s not really from France but Hungary, though this is never explored further, so we have to take her at face value as a cartoon horror villain with no motivation beyond getting this film to 98 minutes. Besides the first draft dialogue best left in the recycling bin of an Iowa Writers’ workshop, Greta is cut at the heel by its poor pacing and lopsided structure: Frances recently lost her mother, and clearly seeks out something maternal in Greta when they first meet.

But less than half an hour in, we’re already in panic land and Frances has realized what an insane bitch her new friend is. None of the maternal mind games materialize because the film changes rails so early on that we’re left with no suspense and surprises. There aren’t even any real fake-outs or alternate rhythms introduced, and what should be a breeze quickly becomes an interminable slog waiting for the next beat to hit.

Huppert and Moretz are all that make Greta more than a bargain bin Blumhouse production or worse, a student film. Seamus McGarvey has some impressive moments as cinematographer (particularly the shots of Frances in her building’s elevators, walled with infinity mirrors), and the production design is strong. But these minor accomplishments just throw the movie’s crippling weaknesses into sharper relief. More than anything, Greta fails because it is boring, and few films can recover from crossing that cardinal sin.