Spurious backlash from fanboys aside, Captain Marvel is merely a mediocre superhero film. B 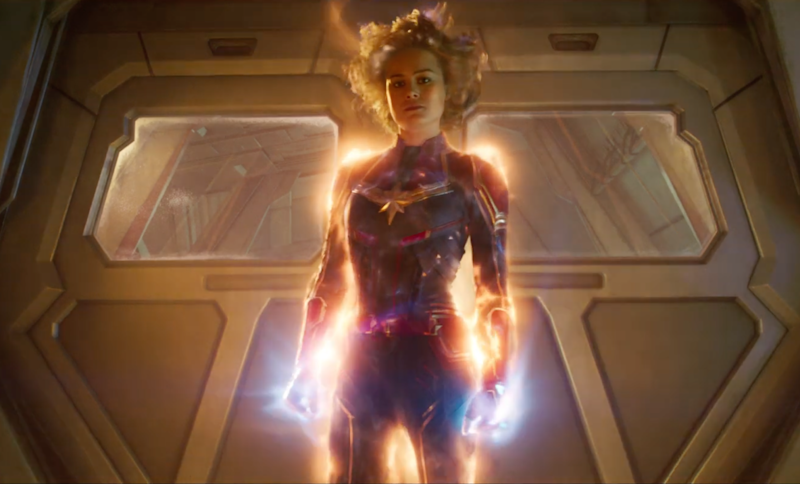 On the heels of the latest of a series of gross fanboy backlashes, Captain Marvel arrives in theaters as an adequate superhero film, complete with many of the strengths and weaknesses of the genre.

Announced nearly four years ago, Captain Marvel stars Brie Larson as Carol Danvers, the first female superhero to serve as the protagonist of a Marvel Cinematic Universe film. The character has origins both human and alien and gets caught up in a war between alien races, in a plot that goes in an unexpected direction. And Samuel L. Jackson's Nick Fury, mostly sidelined in recent Marvel pictures, gets full sidekick duty, and even gets digitally de-aged.

Captain Marvel is somewhat kneecapped by getting off to a terrible start. The first 15 minutes of the film is almost completely incoherent, and anyone without working knowledge of the comic source material will be totally lost. But it gets better after that. The bulk of the film is set in 1995, with a soundtrack of period-appropriate, female-sung post-grunge tunes from the likes of Garbage, Hole, and Elastica. It's a similar sensibility to the soundtrack of the Guardians of the Galaxy movies, although moving the chronology forward by about 15 years.

We see Danvers arriving on Earth and trying to piece together her past, which includes a mysterious mentor figure (Annette Bening) and an alien (Jude Law) whose ultimate loyalties are mysterious. There's also a rival race of shape-shifting aliens called Skrulls, whose leader is played, sometimes in voice and other times in human form, by Ben Mendelsohn.

Captain Marvel was directed by Ryan Fleck and Anne Boden, best known for relatively small indie films like Half Nelson, Sugar, and It's Kind of a Funny Story, and represents a non-traditional choice for an MCU film. The action scenes are a bit choppy, and one scene—a fistfight on top of a moving train—is the kind of thing that might have taken place in a movie made in 1995.

What’s best about the film are Larson, charismatic and exciting as the titular superhero, as well as the plot machinations of the alien feud. There's a very entertaining subplot involving a cat, which has a long buildup and a sublime payoff. And there's also a nice tribute to the late Stan Lee. The worst parts are that opening, as well as a third act battle that, while exciting, is yet another MCU climax that's just a bunch of big things exploding in the sky.

It's refreshing to see one of these films concentrate on a smaller group of characters, although the Captain Marvel character will be joining the Avengers in the next movie, which is less than two months away.

Captain Marvel doesn't go all out with any type of over-the-top feminist agenda. The film is undeserving of the latest odious campaign by the toxic fanboys of the world, who are going hard sight unseen at the film for, essentially, having a woman in the lead, as well as some innocuous comments Larson made about wanting to have more representation for women and people of color on her press tour. Because if there's one thing in the world that white guys just aren't getting a fair shake at, it's representation at press junkets. While not by any means part of the top tier of MCU releases, Captain Marvel is a serviceable entry that boasts some creative ideas and a strong lead performance.