On Axe (1974), a film so prescient it was already deconstructing slasher film tropes before the genre had even been fully established. 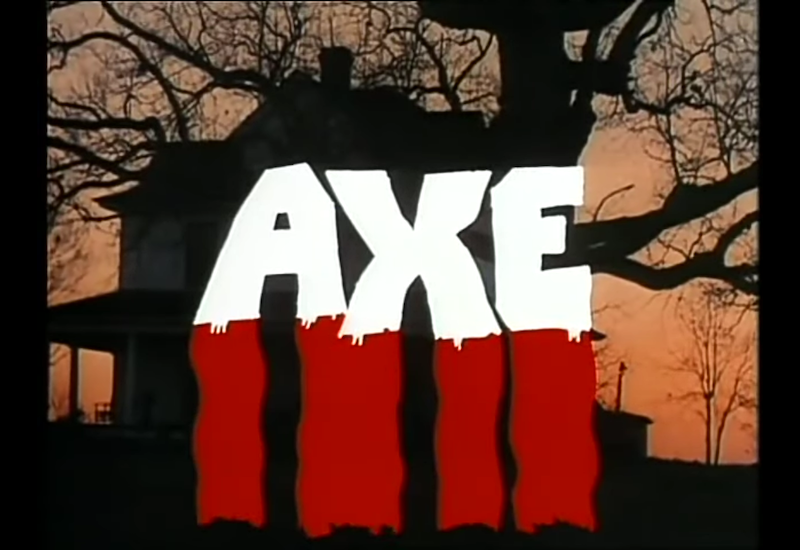 The pioneering indie slasher film Axe centered on the meditative visions of filmmaker/actor Frederic Friedel and actress Leslie Lee. The film was so prescient that it was already deconstructing slasher film tropes before the genre had been fully established. It turned the "final girl" concept inside out and presented murder, survival, and desperation as products of ambiguity. At a time when George Romero and Toby Hooper were accidentally creating the formula for modern gore fare, Axe was carefully exploring the nature of morality and violence with a moody horror that’s as challenging and scary today as it was nearly 50 years ago.

The film’s most brutal moment occurs near the beginning. This sequence serves as an introduction to three of the film’s main characters—two cigar-chomping big city criminals and an insecure young thug-in-training named Billy (the latter portrayed by Friedel who wrote and directed Axe). Initially we find them hiding in a dark apartment that’s home to a gay/transgender couple in urban Charlotte, North Carolina. For unexplained reasons, they torture and murder the pair and then go on the lam. Once they get deep into the sticks their amoral havoc continues. As dusk comes they decide to hide out in a remote farmhouse that’s home to a disabled elderly man and his teenaged granddaughter (Lisa, played by Leslie Lee). From here on the movie’s tone is defined by a hazy, dream-like tension.

At first Axe bristles with hyperactive power akin to that of H.G. Lewis’ Just for the Hell of It or Harry Novak’s sleazy gore/soft porn hybrid A Scream in the Streets (Novak served as the executive producer of Axe and owned Boxoffice International Pictures which distributed both A Scream… and Axe). Darkness and an overcast sky loom during the more chaotic urban-set first half, while the film’s more minimal latter half is characterized by gleaming cinematography depicting farms, woodlands, and fields basking in blue skies and sunlight. Regardless of the bucolic scenery, the gloom never lets up. Bloodshed always controls the narrative, but its manic intensity disappears once the criminals escape the city.

Silence is what sets Axe far apart from the average slasher, a type of film better known for screaming torture victims and flesh-rending power tools than quiet desperation. The ambient sound of the film’s rural location and its eerie score fill up more sonic space than any dialogue. Even when dialogue occurs it’s a lo-fi blur of grade-Z sound design. The soundtrack music is a languid collection of avant-garde minimalist themes performed by composers George Newman Shaw and John Willhelm. An analogue electronic keyboard dominates these lonesome melodies. Its sound is coded narration gently outlining every violent, muted, isolated moment. The film’s brittle continuity lives and breathes through the music.

Leslie Lee was 23 and worked as a model before a random audition found her cast in the starring role as low-key teen weirdo Lisa. She had no previous film experience and would never work as an actress again. Lee’s doe-eyed innocence and gaunt emotional restraint evoke the behavior of a lost child scarred by something unspeakable. Her performance stirs up memories of the damaged figures portrayed by Mbissine Therese Diop in Ousmane Sembene’s Black Girl (1966) and Lamberto Maggiorani in DeSica’s Bicycle Thieves. Such quiet/ultra-realistic films and their humble characters share much more with Friedel’s work than anything from the 1970s gore scene. Oblique violence becomes peripheral as the film’s story begins to follow a strange logic that only exists in the wake of tragedy. Axe is a cinematic vigil memorializing the end of one mysterious nightmare and the beginning of another.