A Short Cut in The Big Short 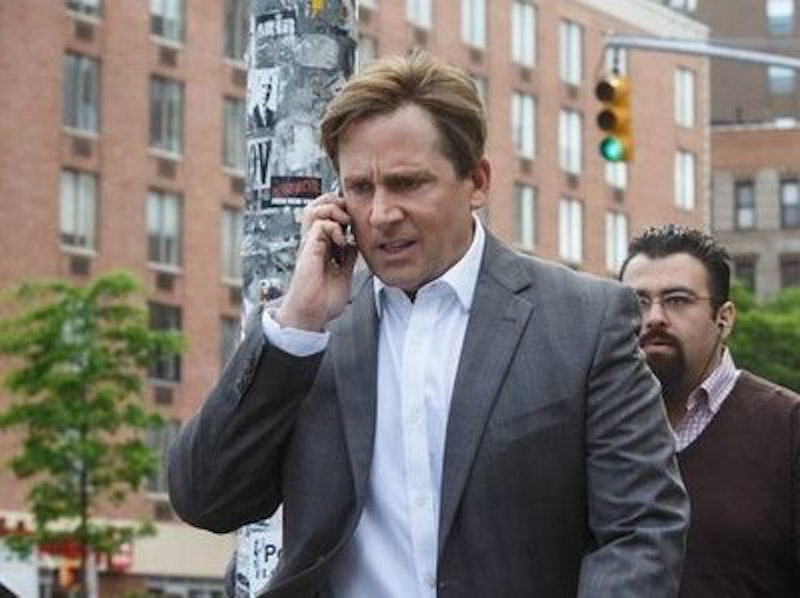 Anthony Bourdain has just explained about fish and collateralized debt obligations, and we’re back to the conference room. The guys are yelling at Ryan Gosling (who plays the bond trader). The best bit from the yelling: “So somehow you’re, like, the, the Dora the Explorer and you’re the first person who has found this thing that—” The character saying this went to Brown, but I swear he says “Dore-ah the Explore-ah.”

Steve Carell, as the hedge fund manager, cuts through the noise. “Hold on, hold on, hold on,” he says and the yapping subsides. Then, to Gosling: “So mortgage bonds are dog shit. CDOs are dog shit wrapped in cat shit.” Gosling considers the matter. “Yeah, that’s right,” he says.

Well, it’s not wrong. But all Carell is saying is that mortgage bonds are bad and CDOs are worse. Really, the point is that the terrible CDOs have nice ratings, triple-A’s. Industry standards have been junked and a fraud is going on. Carell’s character leaves that out. Bourdain in the kitchen also leaves out a great deal. The Big Short explainer on CDOs is built like an inside-out newspaper story. Normally a piece’s lead sketches in a situation, and then the body of the piece gives details so we can understand the situation better, and finally the wrap-up tells us nice and quick why we should remember the situation. Not here. The explanation starts out with as much detail as it’s going to have, and then parts drop out until there’s Carell triumphantly holding a left-over shaft and knob.

The sequence’s lead is Gosling’s character on CDOs: “This is where we take a bunch of B’s, double-B’s, triple-B’s, and when the pile gets large enough the whole thing is suddenly considered diversified. And then the whores at the rating agency give it a 92, 93% triple-A rating, no questions asked.” These two sentences are more useful than anything that follows. That’s because neither the sequence’s body (Anthony Bourdain) or its wrap-up (Steve Carell) has anything to say about a key word, “diversified.”

An investment is considered safer if it has money coming in from all directions; if something goes wrong in one quadrant, the other quadrants will keep the flow going. A mutual fund that draws on both stocks and bonds has a good shot at being diversified. A CDO isn’t like that. It’s all one thing, home mortgage payments, and the payments are made by people whose credit is all the same, meaning mediocre at best. But because so many mortgages are involved, the rating agency decides any given CDO is diversified and therefore worthy of a triple-A. That’s the Ryan Gosling explanation. In the book the movie’s based on, Michael Lewis writes that the rationale was more that the bonds came from different parts of the country. Under the Gosling explanation, a CDO is considered diversified in the same way a bag full of different potato chips is nutritionally balanced. Under the Lewis explanation, the CDO is more like a truck full of nitroglycerine, and it’s considered safe because the nitroglycerine is stacked throughout the truck’s hold and not in one section of the hold. Either way we’re looking at a bald dodge, and the logic deserves to be put on display.

But the movie gives us Bourdain with his fish. Bourdain’s lecture establishes that bad things are being passed off as good. But how are they getting passed off? That angle disappears. Bourdain: “Whatever crappy levels of the bond I don’t sell, I throw into a seafood stew. You see, it’s not old fish, it’s a whole new thing. And the best part is, they’re eating three-day-old halibut.” Changing the debts’ form—fish to stew, bonds to CDOs—is held up as doing the trick. But the movie just told us, via Ryan Gosling, that the trick was having lots of bonds. (And that’s leaving aside the book’s version.) Also, you’d think from Bourdain that the debt’s key problem was that it got worse with age, the way fish does. But the debt was no good to start with, and the key problem was that responsible authorities pretended otherwise.

Finally, Carell. He doesn’t even tell us that bad is being passed off as good. He just says the stuff is bad and leaves it at that. “Yeah, that’s right,” Gosling says. I say bullshit. I don’t know if The Big Short should be trusted or distrusted on the Wall Street mess, and I do know it’s a wonderfully made film. But this explainer is a fraud.