Shrugging in the Face of Fandom

Ender’s Game is a painfully average adaptation of a beloved novel. 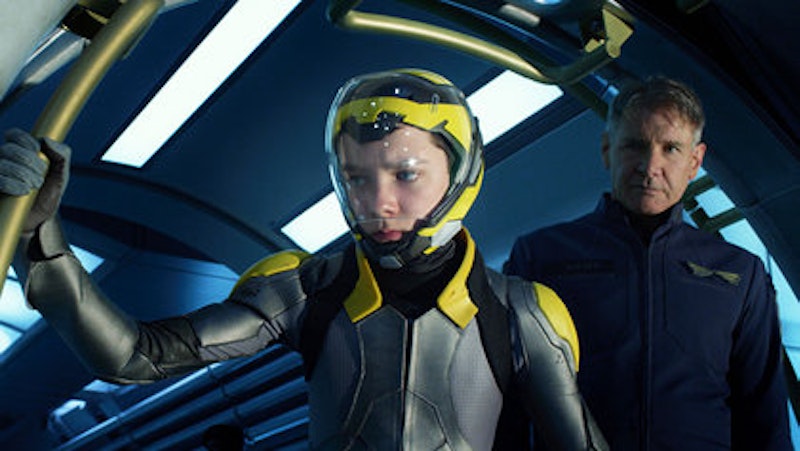 Ender’s Game is one of those young adult sci-fi books you’re expected or strongly encouraged to dive into as an adolescent. I have a vivid memory of my cousin Xela jumping up in the air in a Barnes & Noble, arms outstretched, eyes wide with excitement and disbelief when I told her I hadn’t read it. I don’t remember why I didn’t get it that day, because I still haven’t read it, just never got around to it, even though the title was amazing. All I know about Orson Scott Card is that he wrote Ender’s Game and is more infamous lately for his angry homophobia (“Marriage has only one definition, and any government that attempts to change it is my mortal enemy.”) 11,000 people pledged not to see Ender’s Game during its opening weekend because of Card’s views—and anyone who knew about that petition and cared enough to sign was probably a mega fan of the books. That’s what I knew going into the movie, next to nothing, except that it’s a rich series that millions of people love, and that any hour and a half adaptation would be impossible, and a disaster like Dune would come into existence.

The film Ender’s Game ends up as okay, but still brainless, hopelessly boring/aesthetically repulsive like the other dozen space/fantasy built around cheap action, hot girls and guys getting dirt and a streak of blood on their faces, and an arc, a series of arcs, so predictable that the brain turns off, on its own, disappointed in you for wasting its time. It’s so rote it hurts: every word out of everyone’s mouth is a cliché or expository setup. A movie is really plastic when the moral lesson or theme is shouted at the audience like a speedy ninth grade English student delivering a presentation in front of his class.

There’s an alien race of ant/scorpion creatures called the Formics; they’re not humanoid and we can’t communicate with them. They made contact with Earth some years ago, we immediately attacked them and they retaliated, leaving lots of humans and aliens toast. Ender (Asa Butterfield) is the golden goose gifted by God and picked by Harrison Ford—checked out onto another plane with half a body and soul left to growl and limp around in—and is determined to use this genius boy to destroy the supposedly hostile Formic species. Maybe they were trying to communicate with us, says the boy, after groomed for what had to have been years but was like a week, destroying their entire planet without knowing what they were trying to say. Why not adapt lesser-known and beloved pulpy sci-fi books with more ridiculous high concept premises? The content of this Ender’s Game is so run-of-the-mill spacemen future movie with none of the interior behavior of Ender that constitutes most of Card’s book. So without any of the psychological or philosophical meat of the book and an empty entertainment vibe, Ender’s Game feels like a waste of time and a disservice to the fans, because a more fleshed out, authentic film version might not happen for a long time. Even as a non-fan, this is the wrong franchise for quickie popcorn treatment.