Tom Selleck’s a joke, but Donnie Wahlberg saves the day. 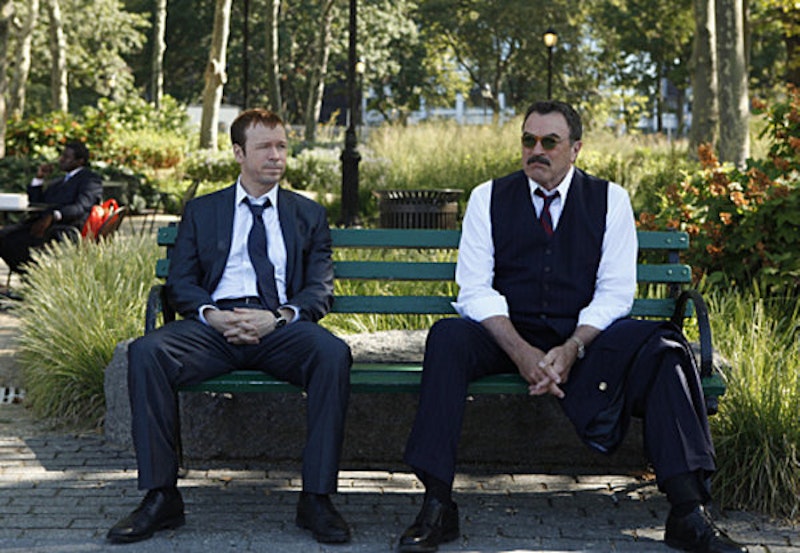 Tom Selleck is an awful actor, which is hardly a bulletin. Anyone who remembers his first starring role in a TV series, Magnum, P.I., may or may not agree with that assessment: I did watch one, maybe two, episodes of the dopey detective show back in the 80s, before cable and VHS rentals took over and liberated viewers. Let’s just say that Magnum made The Love Boat look like Boardwalk Empire by comparison. I’ve never seen a movie, knowingly, that features Selleck in even a bit part: like post-The Color of Money Tom Cruise, Sly Stallone or Ben Stiller, the guy is a just a non-starter for me.

So it’s flat-out weird—not embarrassing, really, since everyone has a couple of TV skeletons—that I’ve shelled out money for the DVD collections of the first three seasons of Blue Bloods, the popular cop procedural (average age undoubtedly around 70) that Selleck currently stars in. I like cop/courtroom/detective shows, which is probably why two years ago I picked up the first season of the favorably reviewed CBS show on a whim; must’ve been between issues of MI-5, Waking the Dead or Breaking Bad.

Blue Bloods, with its moralism and family values laid on thick, is really a throwback to another era; it could’ve competed with Hill Street Blues. Quickly: Selleck plays Frank Reagan, New York City’s police commissioner, working up to that post after the requisite tour in Vietnam, beat cop duty and a detective stint. That his father Henry (Len Cariou, even worse than Selleck) was also PC, and a Korean War Marine, greased the wheels for Frank isn’t really touched on. The Reagans (Frank has two sons, both cops, and a daughter, an assistant district attorney; he’s a widower and also lost another NYPD son who was murdered by bent cops) are dutiful Irish Catholics who attend mass, say grace before every meal and always seem to have glasses of wine, bottled beers or tumblers of Scotch before them. Not that anyone ever gets drunk. Frank is so old-school that he’d probably be buddies with my maternal grandfather, who emigrated from Dublin at the turn of the 20th century and raised his family in the Bronx on an NYPD salary.

Frank dresses in smart three-piece suits, dines at the city’s top restaurants and lives in a spacious Brooklyn home. The economics don’t really fit, and I keep hoping Blue Bloods will present a scandal involving Frank and many, many five-finger discounts, but I don’t think that’s in the cards. All that aside, what really bugs me is Selleck’s constant lip-curling, exasperated sighs, brow-furrowing and gratuitous grunts. I can’t remember him smiling, but then, as the character often says, he’s responsible for the well-being of “my city.”

Two other actors, Will Estes (son Jamie) and Bridget Moynahan (daughter Erin), are also wash-outs, as are the three kids. Which leaves Donnie Wahlberg, who plays the headstrong, always-broke detective Danny, and he’s pretty terrific, as is his wife Linda (Amy Carlson). Maybe the former New Kid on the Block took acting lessons from his brother Mark, but he’s the guy who gives Blue Bloods some 21st-century spark. In a family that litters conversation with quotes from Yeats and Homer—Jamie graduated from Harvard Law School—Danny (an Iraq vet) claims that he “never reads,” and has a filthy mouth that’s only held back by network rules. He roughs up the perps he collars, is close to a shoot-and-ask-questions-later gunslinger, wrecks cars and butts heads with his superiors, including his father. A complete mutt, Danny bears little resemblance to the rest of his uptight, ideological family, barely tolerates church, eats with his mouth open, and when encountering the families of murder victims issues the standard “I’m sorry for your loss” with almost a shrug. In short, it’s Wahlberg who’s responsible for the Blue Bloods pulse, and that’s why I watch the show.

If the brothers Wahlberg co-starred in an action/suspense film, it might release Donnie from the network TV ghetto.