12 Years a Slave is difficult, but important, to watch. 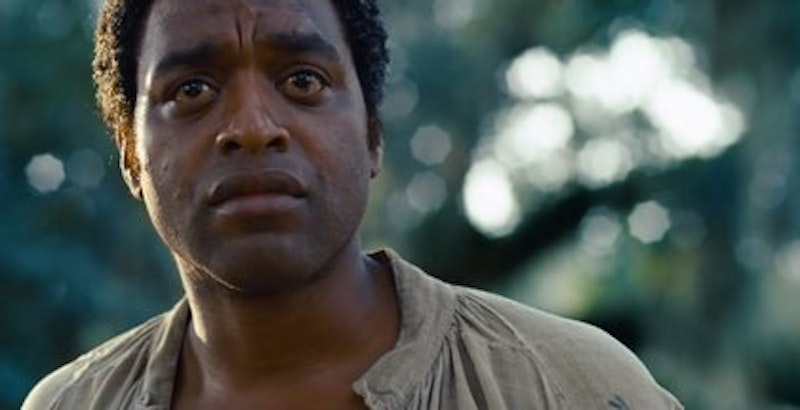 Hollywood is adept at providing escape when we’re exhausted or bored with reality, offering movies so we can laugh and fall in love. So we can go on road trips or war, save the world and destroy it all at the same time. Hollywood makes us horny, terrified and warms our hearts with sentiment, though usually uses history for its own purposes. When historians discuss film, they are almost always incredulous, skeptical, or flat-out upset with the way facts have been manipulated. And yet, how we learn about the past often comes from motion pictures. Almost all of the time, Hollywood gives us what we think we want and covers up what they aren’t sure we can handle, especially in historical terms—Amistad and Schindler’s List are exceptions.

Fox Searchlight, which has built up an impressive resume of experimental and risky films over the last several years, recently released a film by British director Steve McQueen based on Solomon Northrup’s book 12 Years A Slave, published in 1853.

12 Years a Slave is a powerful exception to the Hollywood rule that enables us to avoid the visceral realities found in the gut and heart and not the mind, those truths that might take a psychological toll on us. The film demands that you witness history, that is, the peculiarly American history of slavery, through the lens of one man.

Here’s how I see it: when you sit down in a theater, you enter into an agreement with a director. The next 120 minutes or so are no longer yours. If you invest in the experience, you’re in the hands of someone else. No bathroom breaks in the middle. You’re there for the duration. That is what you’ve paid for: an immersive experience. That agreement can leave you wanting or angry. It can get to you, maybe in ways that real life rarely does. Novels, personal essays and memoirs have this potential. So does music. But film presents what other mediums don’t: a short window of time to be inundated with sound and image. In my experience, special effects and animation don’t work. What gets me there is empathy. Pain. Mining the psychological and emotional terrain of human existence: the big questions, the unsolvable puzzles. What question, what puzzle, is more central to American history than how slavery was allowed to exist for so long?

Challenge yourself to watch every second of 12 Years A Slave. Don’t allow yourself to shield your eyes. I did …a few times. For white audience members, a certain degree of guilt will undoubtedly creep in while watching this film. What you do with that feeling is important. Instead of simply berating yourself with that guilt, try and accept that all of this has happened and it was real. We’re not used to seeing this kind of reality on film. Our past informs our present in ways most of us would like to forget.