The uncompromising Museum Hours is delicate and sad. 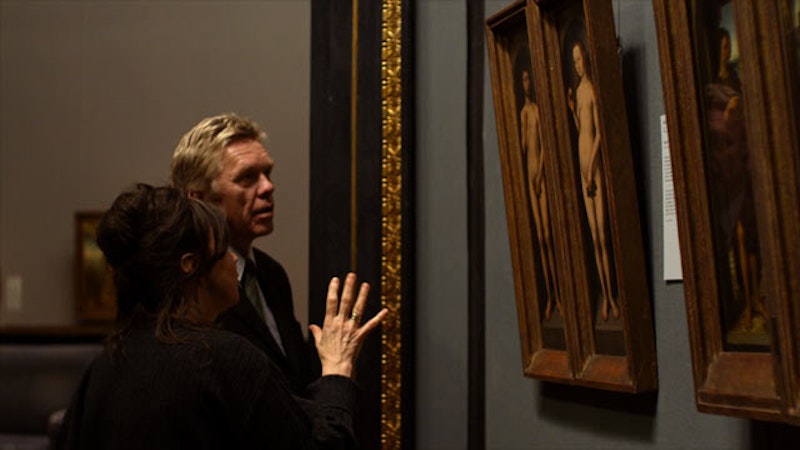 Museum Hours couldn’t even hold the attention of the three elderly couples who walked out 40 minutes into an early afternoon matinee with little embarrassment. They took their time, as the movie does, in leaving. Jem Cohen’s most widely distributed narrative film yet is beguiling and genuinely mystifying, because it holds back, and isn’t interested in compromising for the person who’s checking their phone or watch during the Bruegel expert’s informative tour. Museum Hours ostensibly follows a guard at the Kunsthistorisches Art Museum in Vienna named Johann (Bobby Sommer), who spends most of his shift and most of his days to himself, sitting and watching from behind a red velvet rope as groups of primary school students, older couples, artists, rich people, and a vast swath of just the rest of us bored out of their skulls, waiting to get back to whatever screen or bowl they’d temporarily left.

Cohen doesn’t care that this is the movie you really have to be in the right mood for, or it’ll be irritating, or even worse, far worse, forgettable, a nothing movie. Watching it myself, I felt strung between two ends, alternately jittery and fidgety, or serene and transfixed by Cohen’s un-assertive observation, allowing scenes, landscapes, and interactions, micro-interactions, and conversations between people play out as they would through your own eyes and sense of time. Johann meets and briefly befriends a woman named Anne (played by Mary Margaret O’Hara), but there’s no serendipity here: their “paths cross” but not in some life-altering, unbelievably absurd scenario where the same wasted platitudes on the melancholy of the human condition are shouted out in hoarse, recycled tongues meant to make the audience feel more comfortable and smarter than they are. I wonder what the ratio is with walk-outs: how many believe the film is beneath them, and how many are embarrassed, angry, or confused that the film is above them.

Again, who cares? Cohen’s gaze is placid but critical and aware, his composition and editing full of genuinely surprising and affecting nuances like the way a piece of ripped cigarette cellophane blows briskly out of frame right before a cut, or the unknowing, inquisitive stare of a real museum patron who has no idea she’s staring right into the camera, or how whatever chemistry there is between Johann and Anne is complex and hard to read, and very fleeting. The way the camera moves and observes with such grace and restraint, and the way time moves as it would in a museum: long stretches of silent, panoramic beauty and boredom punctuated by brief glimpses of genius you feel lucky to have connected with: the details in Cranach and Bruegel’s paintings, the sly look of a boy up to no good, all the intricacies of a love triangle depicted fully in facial expressions, how it’s all a cry for cosmic help, for God, the Singularity, or some kind of reassuring womb. No surprises, life is happy/mad/bad/sad, the message of every novel or movie out there, but it’s all in how you say it and present it. Cohen’s calm, reflective vision runs completely counter to the staid way most people make movies these days, pseudo-indie on up. His work deserves more attention and acclaim.