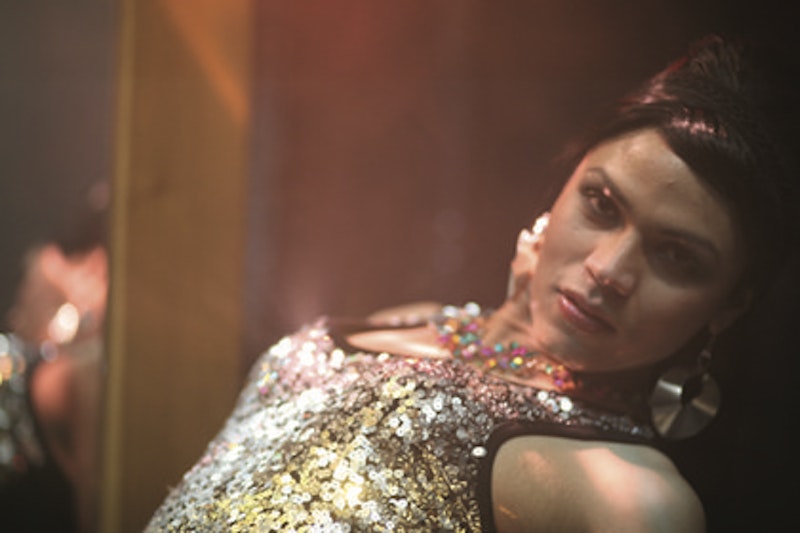 One of the most painful sequences in Wu Tsang's documentary Wildness occurs at what, in other contexts, might be considered Tsang's moment of greatest success.  The film is about Tsang's connection with The Silver Platter, a bar that has catered to immigrant Hispanic MTF trans women for decades. Tsang and several of his hipster queer art friends fall in love with the bar, and start to host a dance-party/performance series on Tuesday's called "Wildness." The weekly event takes off, garnering press and citywide attention for the bar. This culminated in a selection for "Best Tranny Bar" by the LA Weekly, in which journalist Sam Slovick crammed every invidious stereotype of trans women he could come up with into a couple of paragraphs. He presented the bar's patrons as sexually aggressive down-and-out streetwalkers, and the bar as a seamy site of titillation for jaded mainstream straights.

Tsang had tried to block the story even before he knew what was in it. When it appeared, the "Wildness" crowd was horrified, and their protest campaign led the writer to a heartfelt apology.

But despite this unexpectedly positive resolution, the incident reverberates uneasily through Tsang's film. Slovick's sexualized transsexuals are a vicious stereotype… but, as stereotypes, they are also an echo of the way that Tsang treats the bar's longtime patrons in his own film.  Tsang gives The Silver Platter its own narrative speaking voice in the documentary, which, he has said, is intended to emphasize the story's fiction and subjectivity. Perhaps it does that. But the way in which The Silver Platter speaks declaratively and omnisciently in Spanish ("How can I explain my legacy? I'm a beacon guiding my young.") tends to make the bar, not a fiction, but a kind of totemic truth. Slovick's debased sexualized animals are not so much negated as mirrored in Tsang's image of noble, magical, Hispanic trannies, providing a young acolyte access to authentic traditions and spirituality.

Tsang and his friends are certainly aware of these problems, and they work honorably to try to mitigate them. For example, they establish a free legal clinic next to the bar for trans people. But even this effort ends up ambiguously compromised. After one of the Silver Platter's owners unexpectedly dies, the bar's title is contested, and Tsang involves the legal clinic in the resulting dispute. In doing so, he alienates the family that had long run the Silver Platter. He ruefully admits, "I fucked up"—a scene of self-criticism that recalls Sam Slovick's similarly bitter apology. Wildness itself shuts down, and as Tsang and the organizers move on to other projects, the clinic folds. Later, Tsang patches things up with the owners, and they ask him to come back, but the Wildness crew declines. Tsang says vaguely that the moment has passed, which appears to mean in part that the art school kids have all moved on to better gigs.

It's easy to see this as a story of exploitation: middle-class art school kids batten on a marginalized community, use the community as a launching pad for their own interests and careers, and then move on. But things are a bit more complicated than that. First, as I've mentioned, Tsang and many of his friends are themselves queer. Tsang has said in interviews he identifies as "transfeminine" and "transguy." The bar's longstanding commitment to helping, promoting, and embracing trans people is, then, also a commitment to him.

In a telling scene, one of Tsang's Wildness co-organizers acknowledges the danger that Wildness might threaten the safety of the Silver Platter's regular customers, but argues that it would be condescending to see himself as protecting a community that is welcoming them "with open arms." "Who am I supposed to protect them from?" he asks. "Am I supposed to be protecting them from myself?"

The answer is yes and no. The queer hipsters do put The Silver Platter at risk in various ways, and they are surely obligated to try to minimize it as they can. But, at the same time, relationships are about making yourself vulnerable. It might be more useful to think of the link between Wildness and the Silver Platter not as exploitation or initiation, but as bittersweet romance. Not always safe, not always entirely equal, not always even happy, but touched, like the film, with exhilaration and with love.

—I saw this film as a DVD Presser from the Gene Siskel Film Center in Chicago. The film shows there on September 13 at six p.m. as part of "Conversations at the Edge," with Wu Tsang in person. (http://www.siskelfilmcenter.org/cate)