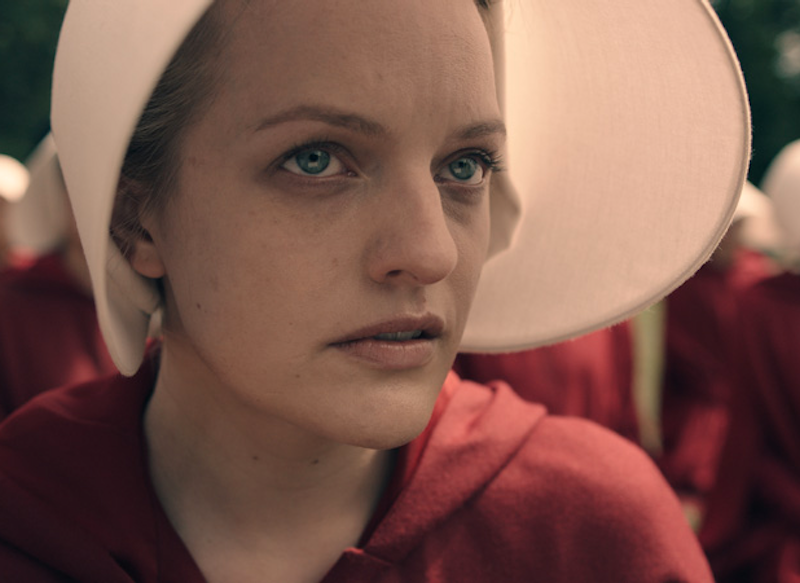 The problem with Iron Fist isn't unique. America has a racist history. As a result, a lot of cultural touchstones are racist in one way or another. When you re-boot them, you need to re-think them, or else you end up reproducing the racism. This is true of pulp entertainment like Iron Fist. But it can also be true of more respected works—like Margaret Atwood's The Handmaid's Tale, which starts on Hulu later this month.

The Handmaid's Tale was first published in 1985 and quickly became a classic of dystopian totalitarian literature. The novel is set sometime in the near future; the United States has been replaced by the theocracy of Gilead, in which women have been stripped of their rights. The title character, who’s lost her original name and is now called Offred, must wear a veil in public, and isn’t even allowed to read. She’s forced into state-sanctioned sexual servitude to an upper-class man named the Commander. For environmental reasons, many people in Gilead are sterile; upper-class couples can use a handmaiden to conceive. The Commander has sex with Offred, and if they conceive, the baby will be taken from her and raised by the Commander and his wife.

Atwood's nightmare future is remarkably vivid, in part because it’s based closely on events of the past. The veiling and fundamentalist restrictions on Offred are borrowed from restrictions on women in Arab Islamic nations like Saudi Arabia. The nightmare of sexual exploitation and dehumanization is taken from accounts of chattel slavery in the American South. Offred's oppression as a woman is familiar, chilling, and realistic in part because it’s based on reality. Gilead is imaginable because it's happened.

Mostly when Gilead happened in the past, though, it happened to women of color. Offred, in the novel, is a white, middle-class, educated college grad. The dystopia in The Handmaid's Tale is not that Gilead is real, but that it’s real for people like Offred. Atwood appropriates the stories of black and Muslim women for Offred without crediting them, much as Offred's child, if she has one, will be taken from her.

The Handmaid's Tale is built on the stories of women of color, but its protagonist is a white woman, because white women are always the protagonists. Like Iron Fist, the story makes racist assumptions. But that doesn't mean it shouldn't be re-booted. On the contrary, as with Iron Fist, it wouldn't be that hard to update Atwood's novel and address its problems.

The television show could cast Offred and perhaps a majority of the other handmaidens as women of color. The narrative would then acknowledge what the novel doesn't—which is that gendered violence is often also racialized. Minor re-writes would be necessary about how the children of handmaid's are treated—would only light-skinned children be acceptable? Would people simply treat children of the upper class as white, no matter their racial background? Those questions don't need to be a barrier to recasting. Instead they could be an opportunity to talk about the arbitrariness of race as a category, and how it’s manipulated by those in power.

It's possible that the television show will address some of these issues. Offred is played by Elisabeth Moss, who is white. But her best friend, Moira, is played by Samira Wiley, who may have a larger role than she did in the book.

Whether or not it addresses the racial assumptions of the novel, though, the television show is another reminder that the original novel had racial assumptions. Main characters aren't just white by accident; they're white because racism creates the assumption that white people are the default, even in stories based on the experiences of others.

People point out that older works were of their time, and they shouldn't be criticized for racism. But today is built on yesterday; stories told in the past get re-told now. The Handmaid's Tale and Iron Fist are both of our time. That can be a bad or good thing, depending on what we do with them.