A diseased toucan spreads a virus that actually makes New York a much better place in 1968’s What’s So Bad About Feeling Good? 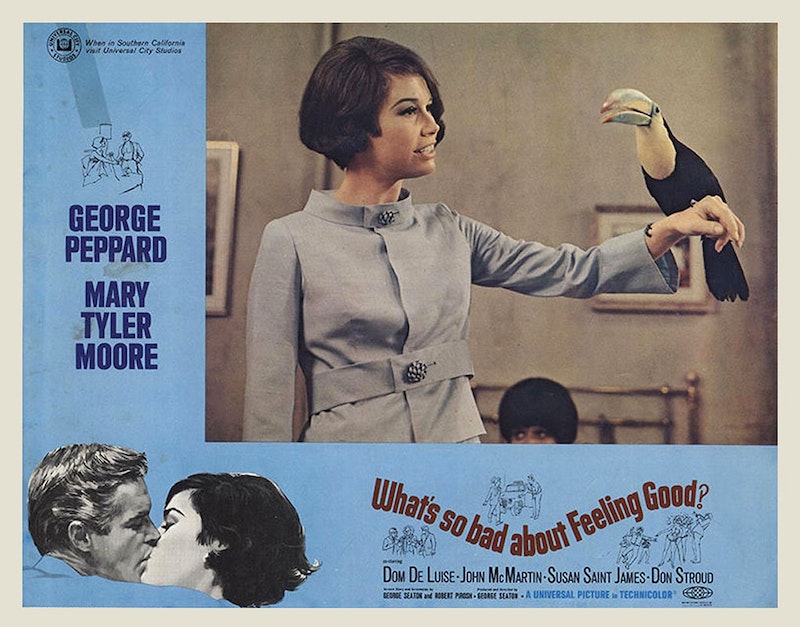 Craig Zobel’s The Hunt—wherein a bunch of liberals kidnap Trump supporters and hunt them for sport—was one of the last movies I saw in March 2020 before the pandemic hit and all theaters were closed for months, some forever—like where I saw The Hunt, at CinéBistro. A chain called Warehouse Cinemas has taken over the space, and thankfully they’ve ditched the “dine-in” bullshit and ceded only to “comfy seating” (a sin) and “comfort food, elevated”—not for me, but go nuts on the crazy hot dogs. I’ll have the popcorn. And a small Coke. Maybe cup for water. I just want to have a nice spring day at a new movie theater… if only they were playing 1968’s What’s So Bad About Feeling Good?, George Seaton’s final film and a flop on release. No more three-picture deal for Seaton, who admittedly made a weird movie, in his words full of non-sequitur scenes and “comedy that’s just more with it.”

Unlike most stiff late-1960s/early-1970s Hollywood gestures to the counterculture and rapidly changing times, What’s So Bad About Feeling Good? is a deliriously stupid and unusual movie for all of its 94 minutes. It’s the bridge between the early-1960s sex comedies, like those with Shirley MacLaine—All in a Night’s Work, What a Way to Go!, Woman Times Seven—and properly modern Hollywood romances set in New York, even as bleak as The Panic in Needle Park. For whatever reason, Seaton shot the film using Techniscope, a flat CinemaScope knockoff mostly popular in Italy. There’s a quality to the light and particularly the blacks and grays in this movie that just doesn’t exist in something like The Great Escape, which may have come out five years earlier, but still operates in the same high key mis en scene of pre-1970s Hollywood filmmaking.

Vincente Minnelli was pressured to include Jack Nicholson in his 1970 musical On a Clear Day You Can See Forever, but he shows up for two scenes, and of course never sings. Hippie hate became a lot more prevalent in the 1970s, but studios and filmmakers like Seaton (who began directing with 1947’s Miracle on 34th St.) were eager to hit back at the “longhairs” and the protestors who Howard Hawks said should be lined up and shot. What’s So Bad About Feeling Good? Is an anti-hippie and anti-beatnik movie, but it’s also an anti-New York movie, a comedy sub-genre ruled by 1969’s The Out-of-Towners. These are nasty movies made by people who don’t read enough and get so much sun it goes to their brain. But for most of the movie, there’s no one to sling arrows, because everyone’s just dandy.

A toucan infected with a highly contagious virus has escaped a boat in the Hudson River and lands in a loft occupied by George Peppard, Mary Tyler Moore, and other layabout beatniks. When introduced, they’re all miserable, uninspired artists in name only who produce nothing and complain constantly. Fortunately, the toucan’s virus only lasts for 10 days, and all it does it make you feel kind, energetic, optimistic, and generous. The city government and the mayor quickly find out and conclude that it must be stopped: people have stopped voting and buying cigarettes and alcohol. The mayor, played by John McMartin, initiates a masking campaign nearly identical to the one rolled out all over the world two years ago. He insists everyone “stay safe and wear a mask,” and there’s plenty of B-roll and montage footage of people walking around Manhattan in 1968, some wearing masks and others not, otherwise acting normally, otherwise acting like it’s 2021.

Peppard and Moore shed their lousy loft life and “clean up”—beside people being nicer to each other and more hopeful, often childlike, a big part of the virus’ positive effect that’s stressed is its re-conforming of everyone with the wrong haircut, wrong politics, or wrong outfit. A line of young men with long hair and beards outside a barber shop is shown next to footage of stockbrokers quitting and cabbies waving kisses to old ladies. There are no young radicals in the toucan’s utopia. Seaton’s movie considers long hair as much of a problem as political corruption and poor public health, as the mayor desperately tries to make everyone cynical again. Structurally, the film benefits from having its “random” bits thrown in the beginning, because by the end, it becomes a gripping thriller involving snipers, a toucan, and a bunch of strategically placed grapes.

The high concept absurdity is glorious and should be embraced for what it is more often: fun, fun, fun. With the untimely death of Foo Fighters drummer Taylor Hawkins a few days ago, I was reminded of their bizarre horror movie Studio 666, released just a month ago and similarly silly. I regret missing it in theaters, but this type of bananas comedy—the kind that makes you pull out your phone in the middle of a movie at home, or during a trailer in a theater, to tell someone else about whatever the fuck you just saw—isn’t produced enough. Make more and people will understand it’s okay to just be dumb.