Five favorites from hockey to cockfighting. 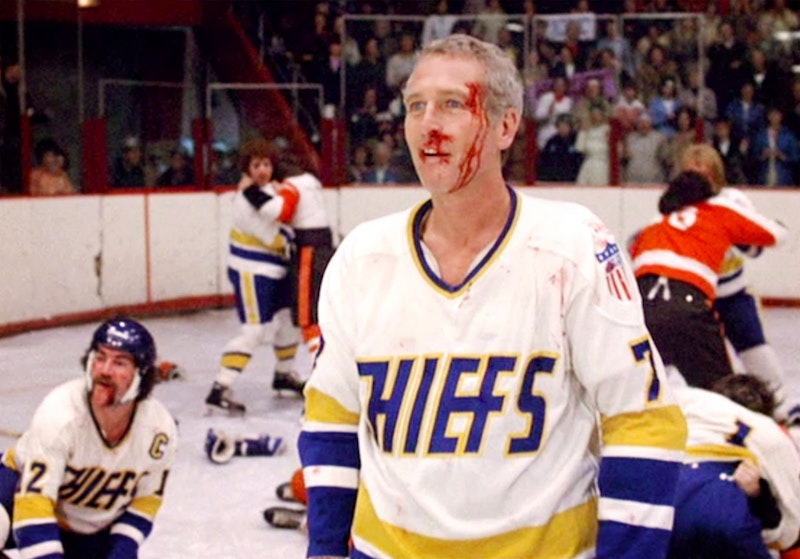 Billy Madison: Tamra Davis helmed the breakout vehicles for three of the most beloved comedians of the 1990s: Half Baked with Dave Chappelle, CB4 with Chris Rock, and my favorite film since fourth grade, Adam Sandler’s Billy Madison. Davis isn’t widely known as an auteur, which is stupid—while not necessarily flashy, each of these films showcases her eye for vibrant color and whacked out, quasi-surrealist comedic sensibilities. In Davis’ hands, Sandler is a one-man Marx Bros, gnawing on the arm of his father’s business associate (Harpo), haggling with a third-grader for his Snack Pack (Chico), making not wholly unwelcome advances on his teacher (Groucho, with Bridgette Wilson Sampras an unlikely stand-in for Margaret Dumont). Knibb High football rules!

Cockfighter: Monte Hellman uses real violence in fascinating ways here. Though staging cockfights is morally indefensible, I doubt the gut punch of the finale—when Mary Elizabeth (Patricia Pearcy) finally sees Frank (Warren Oates) in a cockfight—could work as well without so many preceding cockfights. The fights play out as long as they have to. Some are quick and others go on interminably, but scene-by-scene, fight-by-fight, I went from horrified witness to willing spectator. "I didn't watch those poor chickens fight, I watched your face," she says. For the first time in the film, my eyes leave the screen, my face flushed with shame.

Slap Shot: The three films George Roy Hill made with Paul Newman should qualify him for a spot in the Directors Room, especially Slap Shot. The genius of Hill’s film—along with Nancy Dowd’s gloriously profane screenplay—is the way it smuggles a working-class social drama in the Trojan Horse of a rowdy sports comedy. The plot mainly concerns Newman (never better), the captain of a minor-league hockey team, in his attempts to save it after a massive layoff at the local mill threatens business. Slap Shot ends with Newman spotting his ex-wife leaving town in the middle of a parade, attempting to flag her down and spit whatever futile game he has remaining, but the parade just keeps moving. A perfect visual metaphor for the left behind, post-industrial American town.

The Tall Target: Movies that take place on trains are usually great: The Lady Vanishes, The Narrow Margin, Runaway Train, The Taking of Pelham One Two Three, and countless others. The Tall Target is one of the best, a crime caper about an attempted assassination of Abraham Lincoln on a train between New York City and Baltimore. Mann’s film moves at a clip, packing more plot into 78 minutes than most modern blockbusters—despite their own ballooning running times.

Wes Craven’s New Nightmare: The late Wes Craven helmed several masterpieces in his long career, but none showcases the director and former professor’s academic side quite like the heady meta-sequel New Nightmare. The film stars Heather Lagenkamp as herself, a decade after her star-making role in A Nightmare on Elm Street, unable to shake the film series’ notoriety and terrorized by a real-life embodiment of the fictional Freddy Krueger (played by Robert Englund but coyly credited as “Himself”). Craven uses this premise as a jumping-off point to explore the role of storytelling in our cultural consciousness, the monster functioning as manifestation of popular belief (or lack thereof), making it a spiritual cousin of sorts to Bernard Rose’s Candyman.