Let Me Take You to Your Island

The Lost City is a bonkers, fun, but slight high concept movie. 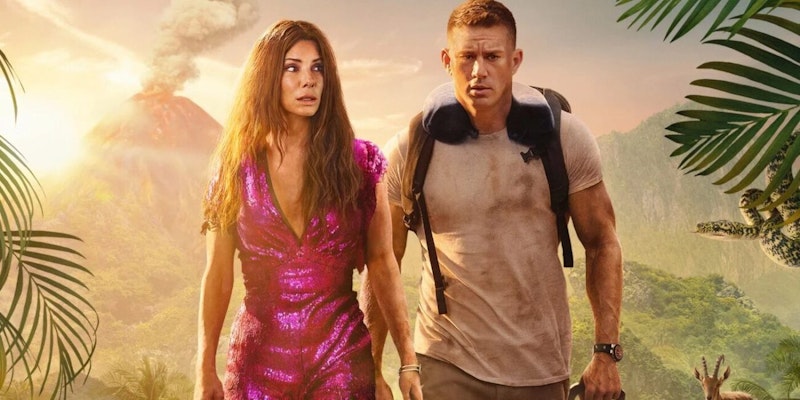 The Lost City is one of those high-concept ideas where the plot is ridiculous, but it doesn't matter because the movie gets every other element right. It puts its characters in a situation for silly reasons and gets them out of it for even sillier reasons, but just about everything that happens in between is wonderful. The film takes a weak concept and throws everything it can at it, including three A-list stars, an against-type villain, a supporting cast full of scene-stealers, witty dialogue, and action sequences that are better-staged than you'd expect. It's an extended riff on Romancing the Stone, another treasure-hunting movie where the heroine was a romance novelist.

The Lost City was directed by Adam and Aaron Nee and written by the Nees along with Oren Uziel and Dana Fox. A fifth writer, Seth Gordon, the director of the sublime documentary The King of Kong: A Fistful of Quarters, gets a "story by" credit. That's the sort of credits that often indicate a film was in development forever and re-written repeatedly, but this one turned out well. Sandra Bullock plays Loretta Sage, a romance novelist who's very successful, even though she hates what she does, and would rather be on the Indiana Jones-like architectural adventures she used to take with her late husband. Channing Tatum plays the Fabio-like cover model on the books; Loretta resents that this blond-wigged himbo is more popular than she is.

Before long, Loretta’s kidnapped, for convoluted reasons, by "Abigail Fairfax" (Daniel Radcliffe), who's seeking a treasure on a remote island, which Loretta mentioned in one of her novels. Radcliffe's character also has a Fredo Corleone-like motivation where he's angry that his media mogul father passed him over in favor of his brother, in a running gag that never pays off. Tatum's cover model decides to attempt a rescue mission, and in doing so he enlists a Special Forces pal (Brad Pitt). Pitt's appearance was in all the trailers, so it's no secret, while his lack of top billing should be an indication of how long his character sticks around. Pitt's stretch in the film is its best stretch.

Most of the movie is a race across the jungle towards the treasure, while in a parallel plot, Loretta's publicist (Da'Vine Joy Randolph) is working to rescue them, with the help of a social media assistant (I Think You Should Leave's hilarious Patti Harrison) and later a horndog pilot (The Office veteran Oscar Nunez, who played a similar part in the previous Bullock vehicle The Proposal.) These supporting actors all get chances to shine, especially for a movie driven by star power.

I never cared about the treasure plot, and get the sense that the film didn't either. You're there to see Tatum and Bullock, whose banter is hilarious and whose chemistry is crackling. The film also draws a lot of comedy from Tatum's physicality: Just because he has the physique of a badass Army man, and could plausibly pass as one, he’s a professional model who has no idea how to fight. And in this age of Age Gap Discourse, we have Bullock romancing Tatum, a man 16 years her junior, but I don't expect many people seeing this movie will mind.

The Lost City is in many ways similar to the Amy Schumer/Goldie Hawn comedy Snatched from five years ago, even putting Pitt in Chris Meloni's part. But it's executed more effectively and offers many laughs as opposed to none. It shares one big flaw with that Schumer film: in real life, if a beautiful white woman of some fame was kidnapped, it’d be a massive news story and the FBI would have been all over the island within the hour.