After watching the 1961 psychodrama The Mark, one is left wondering: who is there to evaluate the evaluators? 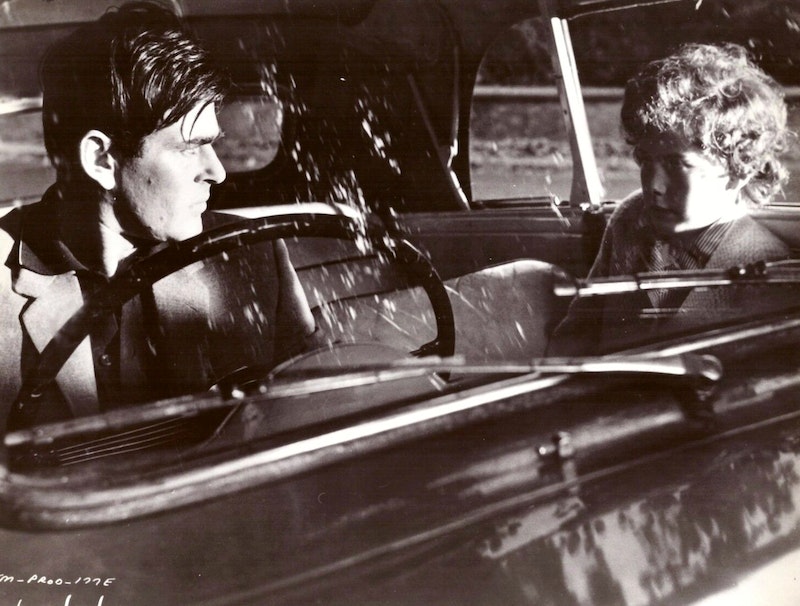 A doctor doesn’t just cure, but also monitors recovery after sicknesses and advises how to stay healthy in future. Similarly a therapist can observe recovery after a breakdown and advise how to avoid future episodes. Which suggests one possible narrative use for a psychiatrist: as an objective assessor of someone else’s mind, a way to let the audience know where another character’s at mentally.

Thus The Mark, one of the films the Criterion Channel selected for their “Frame of Mind” collection of movies about psychiatry. Directed by Guy Green, it was adapted by Sidney Buchman and Stanley Mann from Charles E. Israel’s novel. Released in 1961, it follows Jim Fuller (Stuart Whitman), a man in his 30s who’s just gotten out of prison. He’s trying to integrate back into everyday society, and his psychiatrist Doctor McNally (Rod Steiger affecting an Irish accent) has arranged a job for him at an up-and-coming PR firm. At first all seems ideal; his boss (Donald Wolfit) likes him, and there’s the possibility of romance with young widow Ruth Leighton (Maria Schell). But Fuller’s troubled.

Fuller doubts himself, and as the film goes on we understand why. The movie withholds the reason he was in jail until well into its second act, and then we learn he was imprisoned for child molestation. McNally, who led a prison therapy group Fuller attended, is convinced there’s no risk of Fuller re-offending; McNally tells him, and us, that he was drawn to a child because of a fear of adult women—as a substitute, not an actual object of desire. Fuller’s worried that this isn’t the case, and desperately wants to be cured. We follow him starting a tentative romance with Ruth, even making friends with her young daughter Janie. But an eager young reporter knows about Fuller’s past, and realizes he can get a story out of it.

This leads people to turn against Fuller. The movie goes to considerable effort to make us see this as unjust, and you can understand why; it doesn’t work as a story unless we believe Fuller’s worthy of sympathy. Which leaves us with a story of a man pitted against society, albeit a man of an especially morally questionable slant.

McNally here becomes the objective authority who we must trust knows what he’s talking about. And he believes that Fuller—depicted as a man who accepts responsibility for what he did, who feels guilt and knows what he did was wrong—is unlikely to assault another child and so can be reintegrated into society. I note that the website of MOSAC, the Mothers of Sexually Abused Children, has a list of good and poor prognosis factors for abusers, and Fuller emphatically checks off all the characteristics of a good prognosis. Even so, is there a point to telling this kind of story— a man brought down by the fears of a mob—with this particular protagonist?

Reasonable people can disagree about this, but there’s an artistic theme being investigated. The film’s about a man trying to integrate into adult society. Fuller’s crime came about, as McNally describes it, because he wasn’t properly integrated; therefore his salvation can be realized only if he and society come to terms.

That’s not a bad theme, but the movie fails by having too much of the integration come too quickly. Fuller’s a success at his job, and he makes few missteps in his romance with Ruth. He doesn’t tell her why he was in jail, though it’s relevant given the existence of Janie. You can see why the film hurries this part of the story—it needs to bring him up to a point where he has something to lose by the exposure of his crime. But the choice undermines the movie overall, because it implies it was easy for Fuller to overcome the psychological barriers that left him fearful of women in the first place.

And the origin of that fear is itself underplayed. We get a flashback to Fuller’s childhood and an alcoholic father; we see him accidentally hit his father in the groin, but the moment is less a key to his later neuroses than a faddish bit of Freudianism. The dominant mother who supposedly scarred his relations with women is barely seen.

We’re left to accept McNally’s analysis at his word alone. McNally’s an interesting figure thanks to Steiger’s dynamic performance, which established the man’s intelligence through a wizard-like playfulness. But you wonder about him nevertheless; in flashback scenes of group therapy we see McNally let other inmates hector Fuller in ways that couldn’t have been healthy.

It’s possible to view this as an artifact of memory. These scenes are Fuller’s reconstruction of therapy, so perhaps the reality wasn’t as confrontational as he recalls—and it’s interesting to note that his memories of childhood are presented as flashbacks within these flashbacks, thus doubly unreliable. But then it’s also possible to view the whole film as a kind of internal psychodrama, the symbolic story of a man trying to come to terms not with society but himself. From this angle Ruth would represent an idealised sex-image, the reporter a sense of shame, and McNally an authority figure that supports the selfhood trying to accept its own impulses.

Thematically, that fits with the film’s preoccupation with integration. This is a story, if a flawed one, about coming to terms with reality and the self. And in that story the psychiatrist is not just a mentor or guide but an evaluator, a way the lead character and we the audience can know that things are heading in the right direction. But who is there to evaluate the evaluator?