The Wolf of Wall Street is an exhilarating, depraved tour de force. 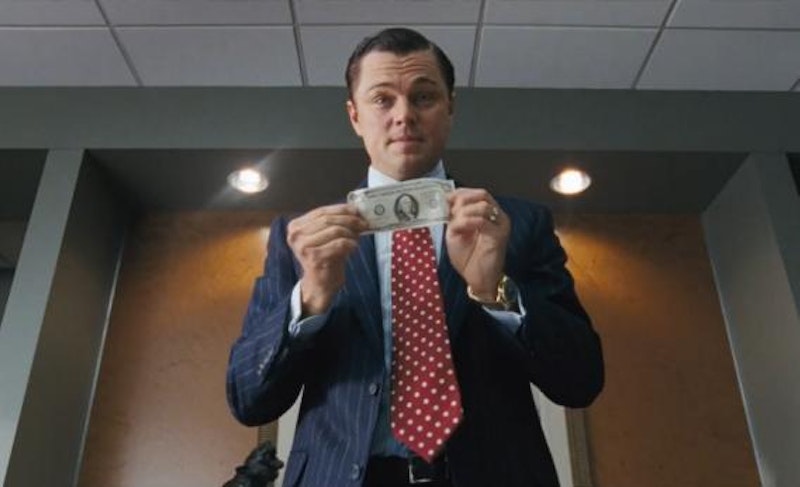 Before losing his entry-level job at a major firm in the crash of 1987, Belfort is counseled by a higher-up played by Matthew McConaughey. At lunch, the latter openly toots from a coke spoon and explains the two necessities to survive as a successful stockbroker: drugs and fucking. He asks Belfort how often he jerks off—and immediately insists he up it to at least twice a day. To relieve the tension. Belfort becomes an entrepreneur, taking over a brokerage firm that deals in penny stocks: creeps and dweebs selling to schmucks and geriatrics who aren’t aware of shady schemes. Improbably, comically, Belfort transforms a garage full of people picking their noses and making maybe a sale a day, into an insanely cash-rich operation that’s caught the attention of the FBI. Belfort is the alpha among a pack of generally repellant and sexually repressed geeks: they hang on his every word, for more money, drugs, and hookers. Jonah Hill is brilliant as Donnie Azoff, Belfort’s repulsive right hand man, a Long Island degenerate of no moral turpitude or graciousness with dentures as white as the mountains of cocaine they consume.

The movie is a barrage of stimulating porno reality, complete sensory overload. You begin to recognize the patterns of an uppers binge in the way the film is structured and edited: there’s a distinct point when all the images and landscapes of pleasure plateau, and then the panic of the oncoming crash. Hollywood movies are made a certain way, with a certain sensibility, set of values and aesthetic constraints that The Wolf of Wall Street ignores. I was chattering and mushing my words together as I left the theater, hands waving, talking too loudly. Let’s keep in mind that Belfort and everyone who works for him are extremely high in nearly every scene. Nothing is said of substance, and Scorsese knows exactly what these maniacs talk like and how they behave. I saw it in a huge sold-out theater on Christmas Day, and people were losing their minds. It was like the audience was on speed: it felt like a flipped-out, raucous rock concert.

The Wolf of Wall Street is what everyone expected Spring Breakers to be, and in comparison, Harmony Korine’s movie feels incomplete and ineffectual. This is not a movie like Wall Street, with any concession of civility, intelligence, acumen, or grace to the sub-species stockbroker. The Wolf of Wall Street is about destructive addiction, and there’s no better way to show an audience that than making them feel like they’re on cocaine and coming down. In three hours, less than 10 people left the theater to go to the bathroom. It was an inspiring, depraved and overwhelming experience.