A Defense of The Secret Life of Walter Mitty

Ben Stiller is allowed to make an inspirational movie. 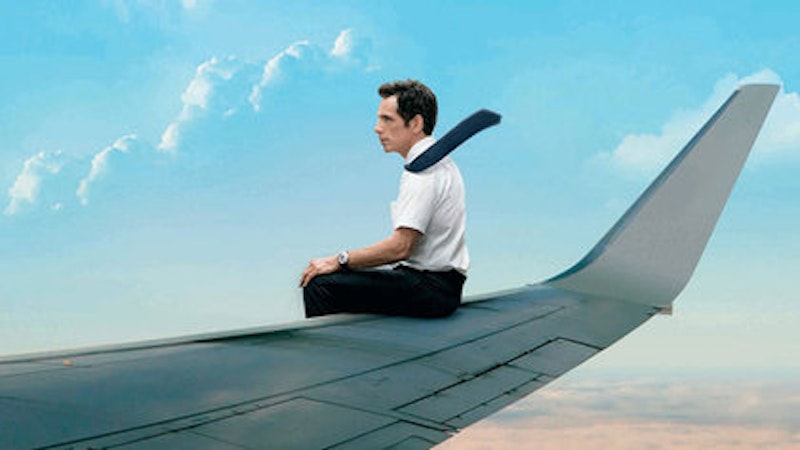 When the end credits of The Secret Life of Walter Mitty began to roll, a group of guys sitting a few rows back at the Christmas Day screening I attended made a half-hearted attempt to incite applause. My own hands came together a couple of beats too late, at which point the originators were laughing it off and shrugging on their coats. Nobody else bothered to join us. There weren't too many of us, anyway, maybe 15 to 20, no kids, most 25 and older. And while it was an inauspicious gesture, I can't think of any other movies I've seen—ever—where something like this happened, including The Wolf of Wall Street. It could be interpreted as a salute to a movie that was a mammoth undertaking for its director, or a rebuke to a torrent of critical loathing, or even an acknowledgement that, in a very basic, elemental way, this is an amazing movie.

Ben Stiller is allowed to make an inspirational movie. I'll say that again: Ben Stiller is allowed to make an inspirational movie. Because that's what his latest project is; you could make weak cases for it as drama or comedy, since it makes stabs in each direction. But the Stiller-starring Walter Mitty does not indulge in the slow-motion Stiller face with suspended-animation vocal color, or the peeved Stiller shock-monologue, or the any number of gross-out gags; it does not play him against anybody as either straight-man or over-the-top kook. With all due respect to the excellent 2000-word short story the movie uses as a jumping-off point, they're two very different animals, and comparing them directly is a fool's errand; after all, this isn't American Psycho we're talking about, where a director and screenwriter are interpreting a several-hundred page long work of fiction.

Stiller plays the title character, a negative asset manager at Life whose continued employment—the magazine has been acquired, is going digital, and a bunch of staff are about to fall under the axe—hinges on his ability to get his hands on a photograph designated to run on the final cover. He's an unassuming, unadventurous sort, given to almost crippling flights of fancy that manifest as brain-dead idiocy to most of those around him. In the early going, these imagined adventures send a jolt through the viewer: like Mitty as a ridiculously tall mountain adventurer-cum-Bud Light commercial gopher, or Mitty and his jackass of a new boss (Adam Scott, rocking a conspicuously bogus beard) facing off on the streets of NYC for a children's toy in a scene that's better experienced than explained. A series of misunderstandings slingshots our hero around the globe in search of a famed photographer, played by Sean Penn, and real-life exploits gradually supplant fantasies, and, scene by scene, Mitty the milquetoast evolves into Mitty the steadfast before our very eyes.

Let's talk for a minute about what doesn't work or sticks out in this movie. As the love interest, Kristin Wiig adds nothing; the role she was handed could’ve arguably been played by anyone, and should have been given to someone with something to prove. The soundtrack is deeply, deeply dippy. Sponsorship is everywhere—there's a brief if in-your-face Cinnabon gouge, McDonald's gets a quick shout out, Papa John’s gets major play (and is even written in as a plot point), and Mitty spends a ridiculous amount of time on his cell phone with an eHarmony.com associate who, sadly, doesn't turn out to be Donal Logue—though the movie has the sense to frame its advocate's pitchmanship as an inside joke most of the time.

All of this is forgivable for what Walter Mitty gets right, namely, capturing the clenched-sphincter fear of middle-aged people facing career implosion, busting out of their comfort zones; the resigned way in which the Life employees accept their doom hints at a story that's bigger than this movie. That's the "inspiration" part of the movie, something that's human and thrilling even as its rolled into something as contrived and focus-grouped as a motion picture: from Mitty skateboarding down a looping, steep grade, or boarding a helicopter with a sloshed pilot to find a ship off the coast of Greenland.

These escapades are color-saturated and lush as travel brochures, and, if you're like me, they'll leave you wondering what you've done in your life that's unusual, interesting, crazy, daring. None of it is cheap: a scene where Mitty balances his checkbook, far from home, lays bare the insanity of draining savings in the service of a job that may not exist when you return. The Secret Life of Walter Mitty is neither clever, nor sophisticated, nor piercing. It isn't a movie for The Most Interesting Man In The World, or anybody who aspires to be that guy; it's a movie for everybody else, for those of us who maybe daydream more than we really, truly live.