A Review of Amy Adams’ Tits

Because I’m not reviewing American Hustle. 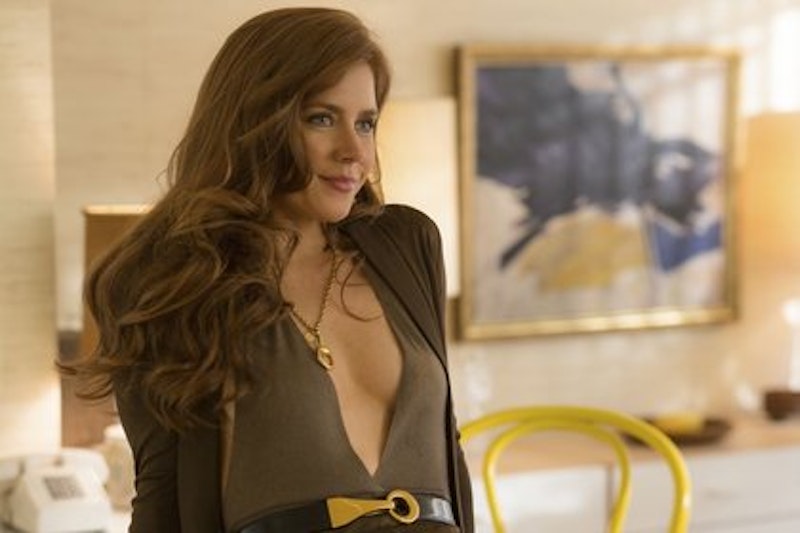 I don’t write movie reviews because I tend to like everything, simply because I’m at a theater eating popcorn and candy. I went to see David Russell’s American Hustle last week because my brother went on forever over Christmas about how disappointing Anchorman 2 was. I’d been dying to see Anchorman 2 because I’m a huge fan of Anchorman, and Will Ferrell in general, but couldn’t stand the idea of not liking the second one, so my husband and I grabbed tickets to American Hustle even though I didn’t know much about it.

I’d like to make feminist peace with the fact this is an article about the perfection of Amy Adams’ jugs, but it probably won’t happen. Feminists who are ready to attack me will have to just try to understand that it’s appreciation, not objectification.

Here’s my stream of consciousness throughout the film:

Is that Christian Bale? Yes, I think it is Christian Bale because he has that lispy thing like in Batman, only now he’s totally Fatman in this movie. Jesus he must’ve had to put on 30 pounds for this part. That combover is hilarious.

Holy shit Amy Adams has the best tits ever. How many movies have I seen her in and not noticed that? I guess Enchanted was a Disney movie, so we didn’t see her girls, and then she was that nun and I think she was nominated for an Oscar—what was that movie called?

The costumes. Somebody went totally batshit authentic-70s crazy on the costumes and the hair for this; love it.

It’s her hair, I always fall for redheads. My first celebrity girl crush was Debra Messing in Will & Grace and God, these open blouses and dresses they’re putting on Amy Adams is reminding me that I would totally play for the home team for Amy. Yes, Bradley Cooper is cute with that permy fro, but nope, if I had a hall pass out of this cast, I would jump the fence for Adams, even though she has a done a few pretty shitty movies. This totally makes up for it.

I wonder if other people will like this, because it seems like the kind of movie that would be nominated for Oscars, and it’s coming out right at Oscar time. Everyone is good in it, God who doesn’t love Jennifer Lawrence in anything? Good for her for doing Katniss and then just breaking out and now she’s amazing in everything. She is hot, too, and I mean obviously her tits look good but nowhere near the level Amy is rocking.

Jesus Christ, this is like a three-hour long movie and I don’t think Amy Adams has had a bra on once. Is she 40? Her tits are this perky and she’s 40 isn’t she? She has no kids, that’s why. Damn. She is so completely perfect in this—acting, too, not just her boobs.

Hope this ends up being a film people love because I hate it when I see something and think it’s the best movie ever, especially if it’s based on a true story, and then no one likes it and I feel like an ass. It’s a great fucking movie, though, and not just because of how smoking hot Amy and her amazingly perfect tits are.