America’s biggest film star was felled by the Morality Police. 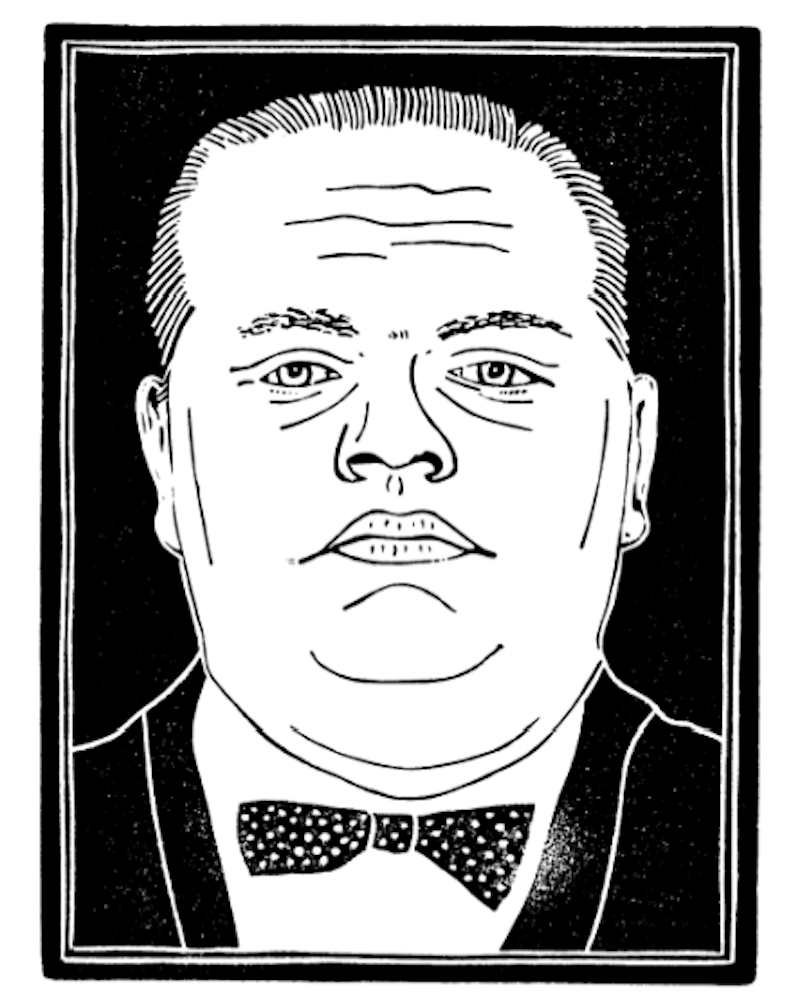 Roscoe "Fatty" Arbuckle was one of America's first silent film stars, dominating the industry from 1914-1920. Despite his obesity, he was graceful, acrobatic and a talented dancer. He was a purveyor of the pie-in-the-face slapstick routine that came to embody silent films, and often portrayed a country hayseed struggling in the big city, co-starring in several films with Buster Keaton and Charlie Chaplin.

Arbuckle, born in 1887, weighed 13 pounds at birth and his mother suffered injuries during childbirth that would later contribute to her death. His father was convinced he was illegitimate and beat him throughout his childhood. After Arbuckle's mother died when he was 12, his father kicked him out of the house.

Arbuckle had a beautiful singing voice, and won a local talent show and then joined a traveling vaudeville company. In 1908 he married actress Minta Durfee and a year later appeared in his first movie Ben's Kid. He soon joined the Mack Sennett Company and became a performer in the Keystone Cop comedy films.

Arbuckle's weight was part of his comedic appeal but he refused to use it to get cheap laughs. He wouldn’t allow himself to be stuck in a doorway or a chair. He despised his screen nickname and when someone called him "Fatty" he’d say, "I've got a name, you know."

Audiences loved Arbuckle and his films dominated the box office. By 1914, Paramount paid him $1000 a day plus 25 percent of all profits. They also gave him complete artistic control. By 1918, he was signed to a three-year, $3 million contract, and began living the high life, indulging in heavy food and drink. His weight shot up to 350 pounds and he developed health problems, including a severe infection in his leg that nearly led to amputation. Arbuckle managed to shed 80 pounds but became addicted to morphine in the process.

On September 5, 1921, needing a break from his hectic schedule, Arbuckle drove to San Francisco with two friends, and rented three rooms at the swanky St. Francis Hotel. Prohibition was in full swing, but the group obtained illegal hooch and invited some girls for a raucous hotel party. At some point, Arbuckle found himself alone in a bedroom with a 30-year old model/actress named Virginia Rappe.

The ensuing details have become the stuff of legend but a few facts are clear. Arbuckle was alone with Rappe. Rappe became seriously ill. The hotel doctor examined Rappe and determined she was simply drunk. Two days later Rappe was rushed to the hospital where she died from peritonitis caused by a ruptured bladder.

The press immediately blamed Arbuckle for Rappe's death. Bambina Delmont, a party guest, told police that Arbuckle raped Rappe. Police concluded that Arbuckle's weight caused Rappe's bladder to rupture. Rappe's manager further suggested that Arbuckle used a piece of ice to simulate sex with Rappe. By the time the story appeared in newspapers, the object had become a broken coke bottle instead of a piece of ice. (Witnesses later testified that Arbuckle rubbed ice on Rappe's stomach to ease her pain.)

Arbuckle denied any wrongdoing but William Randolph Hearst's "yellow journalism" machine had a field day. Hearst's newspapers began running nationwide stories portraying Arbuckle as "a gross lecher who used his weight to overpower innocent girls." Hearst would later admit that the Arbuckle Scandal "sold more newspapers than any event since the sinking of the Lusitania."

There was no hard evidence Arbuckle committed rape. But one of the party guests claimed Rappe made a deathbed statement that "Roscoe hurt me." Arbuckle was subsequently arrested and charged with manslaughter. He spent three weeks in jail before he was released on bail.

Morality groups called for Arbuckle to be sentenced to death. Studio executives ordered their employees not to publicly support Arbuckle. Chaplin never commented on the incident but Keaton disobeyed studio demands and vocally defended Arbuckle. Public outrage was so inflamed that during the first trial someone fired a gunshot at Arbuckle's wife Minta Durfee as she entered the San Francisco courthouse.

There were three trials. Key witness Bambina Delmont was not allowed to testify after it was learned she'd attempted to extort money from Arbuckle's lawyers. She also had a long criminal record for extortion and fraud. The first trial resulted in a hung jury. Ten jurors voted "not guilty," two voted "guilty." One of the "guilty" jurors was a woman whose husband did business with the D.A.'s office. She told jurors she would "vote guilty until hell freezes over."

The second trial also resulted in a hung jury. This time the vote was 9-3 favoring "not guilty." Two witnesses who previously testified against Arbuckle stated that District Attorney Matthew Brady forced them to lie or they would be prosecuted for libel.

During the trials it was discovered that Virginia Rappe had a history of cystitis that flared up when she drank. She'd also undergone several abortions including a recent botched one that nearly killed her. She'd been complaining of severe stomach pain in the weeks before the St. Francis Hotel incident. Doctors found no evidence of rape and no external cause for the ruptured bladder.

The third trial resulted in a unanimous Not Guilty verdict. The jury debated just six minutes before rendering the decision. They issued a rare public apology writing, "Acquittal is not enough for Roscoe Arbuckle. We feel that a great injustice has been done to him as there was not the slightest proof to connect him in any way with the commission of a crime... Roscoe Arbuckle is entirely innocent and free from all blame."

Although he was cleared of all charges, Roscoe was guilty in the court of public opinion. The months of negative press destroyed his reputation. He owed more than $700,000 in attorney fees and was forced to sell his house and cars.

During the time of the trial, the U.S. government was threatening to regulate the film industry with new rules of censorship and guidelines for how stars could behave on and off screen. Fearing government intrusion, the studios decided to self-regulate. They created the Motion Pictures Producers and Distributors of America (MPPDA), naming former Postmaster General Will Hays as president. This led to the "Hays Code," the first official censor of American movies.

Within a week of Arbuckle's acquittal, Hays banned him from appearing in movies and demanded all his films be pulled from circulation. Arbuckle, once the most powerful star in Hollywood, was blacklisted. The ban was ultimately rescinded, but Arbuckle's career was effectively over. He'd become the poster boy for the dangers and excesses of Hollywood.

Buster Keaton was one of the few old friends who came to Arbuckle's aid. He hired him to write and co-direct his movies including the classic film Sherlock, Jr. (Arbuckle worked under the pseudonym "William Goodrich," a riff on Keaton's suggested name "Will B. Good.")  Though his career resumed, Arbuckle fell into a deep depression and returned to drinking. Actress Louise Brooks said, "He made no attempt to direct. He sat in his chair like a man dead."

In 1932, Arbuckle seemed on the verge of redemption. He appeared in six two-reel comedies to great success. Warner Brothers offered him a feature-length film. On the day he signed the contract, an ebullient Arbuckle said, "This is the best day of my life." That night he suffered a severe heart attack and died in his sleep. He was 46 years old.