The Fuzzy and Hypnotizing Inside Llewyn Davis

In a bleak year for film, the Coen Brothers again stand out. 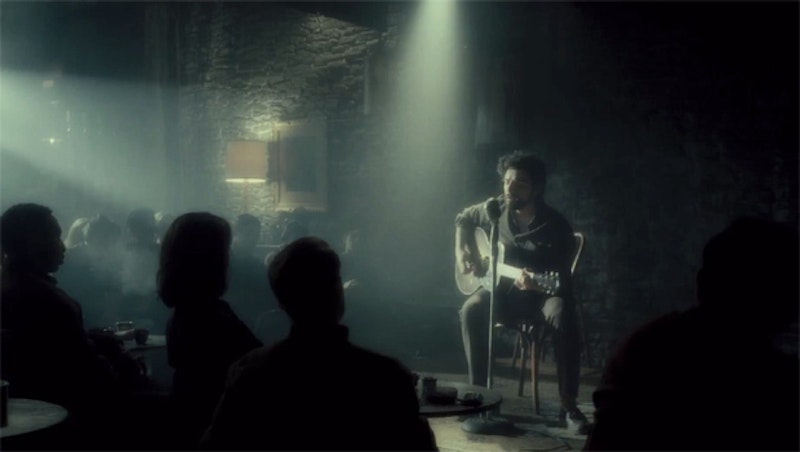 Why do movies suck in 2013? "Ittt’s the money!" It’s amazing that the current Coen Brothers movie, Inside Llewyn Davis, took an extra year to come out because they couldn’t find a distributor. Granted, things are really bad for the movie business. The home video market is terminally ill and nobody is willing to take any chances. Giving guys and girls with slightly skewed visions a couple million bucks with the assurance it’ll recoup theatrically and maybe have legs on TV and DVD is an impossible bet now. It’s easy to forget that successful super-hero movies were rare before X-Men (2000) and Spider-Man (2002). To be fully, obscenely profitable, a movie needs to play as well in China as it does here. And from the top down, most of the movies I saw this year felt like they were on autopilot: predictably structured, sentimental, tied up in a bow with nothing left to think about once you leave the theater.

Inside Llewyn Davis is a peculiar, prickly film whose title character is an unrepentant and bitter asshole. Llewyn Davis (Oscar Isaac) is a struggling folk singer couch-surfing in barely pre-Dylan Greenwich Village, in 1961. He’s having a hard time finding management, places to stay, and money to survive. Davis had a partner—they even made a record together (If We Had Wings). The plot doesn’t plow forward evenly through three acts, it does donuts and arrives right back where it began: with Davis getting clocked and kicked in the gut by a man in a hat in an alley outside the Gaslight for no apparent reason.

He deserves it: Davis is angry, frustrated, and disappointed, but he’s his own worst enemy. He berates and flays the few people who still care about him, becoming enraged when the woman feeding him dinner has the audacity to fill in on a harmony. Davis is too preoccupied with the grim reality of his “career” to pay any mind to the women he’s impregnated. Despite being destitute, he refuses to trim his beard to a goatee and play sideman when given the chance—and in a stroke of bad luck/timing, he turns down royalties for quick cash on a record that ends up being a hit (the joyous earworm “Please Mr. Kennedy,” easily the best song in the movie).

Don’t think Inside Llewyn Davis will give you much insight into the community of early-60s bohemia or folk music. The Coens’ latest film is as solipsistic as its title character, with total tunnel vision. Everyone but Davis is a shrill caricature, and we see them how he does—the scorned lover; the over-earnest veteran; the over-bearing and supportive professors; the silent, unknowable James Dean clone that drives him to Chicago with a junked-out jazz musician (John Goodman); the annoyingly personable and successful peer (Justin Timberlake). Like a great novel, it feels like occupying another consciousness.

This movie stuck with me and I keep thinking about it—how the title isn’t as much a reference to Dave Van Ronk than to the movie’s narrow and distorted interpretation of reality (any comparisons to the real folk singer are specious—the Coens used him for the great title). Despite the dire state of the industry, and a diminishing stable of studio-supported auteurs, Inside Llewyn Davis made its way out, and it’ll make money, with a budget of seven mil. Yes, there will be another Coen Brothers movie, set in Ancient Rome (!), and it’ll be reliably great. But in a year of ciphers, overblown, empty emotional arcs, and tails clenched firmly ‘tween legs across America, Inside Llewyn Davis stands out as a true piece of art: fussy, hypnotizing, befuddling, and mystifying.