A Defense of Roland Emmerich's Godzilla

The critics mostly got it wrong. 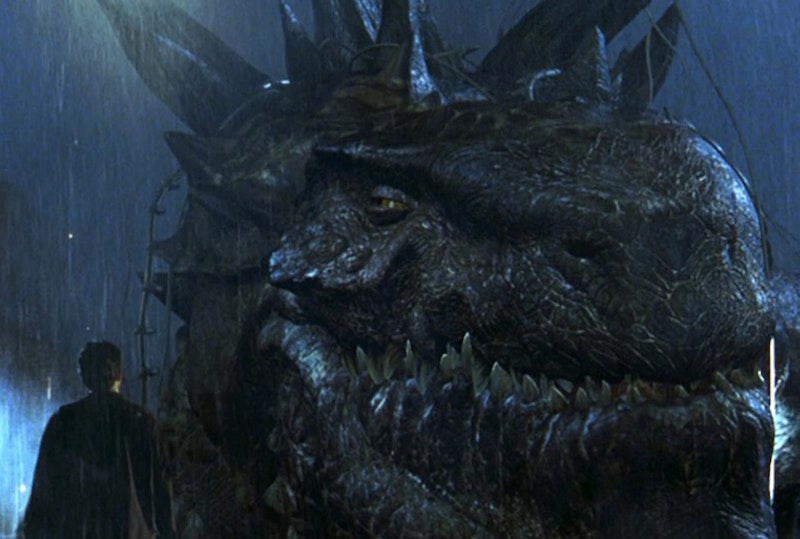 Next year will mark the 20th anniversary of Roland Emmerich's Godzilla—a 1998 film that earned the ire of both critics and kaiju fans. I recently bought a copy of the DVD, which has a very sparse selection of special features. It's as if everyone involved was too embarrassed to record commentaries and retrospectives. One can hardly blame them. People hate this movie. And yet, I find myself siding with star Matthew Broderick, who defended the film on Gilbert Gottfried's podcast. "I thought it was pretty good," he said, noting the movie's box-office success. "I don't know what the problem was."

Roger Ebert wrote a scathing review for the Chicago Sun-Times. It's fitting we focus on the legendary critic—given that, in response to negative reviews of Emmerich's earlier films, Godzilla boasts unflattering caricatures of Ebert and television cohost Gene Siskel. To his credit, Ebert took it all in stride. "They let us off lightly," he wrote. "I fully expected to be squished like a bug by Godzilla. Now that I've inspired a character in a Godzilla movie, all I really still desire is for several Ingmar Bergman characters to sit in a circle and read my reviews to one another in hushed tones."

Ebert took a harsh view of Emmerich's use of computer-generated imagery, pointing out much of the film takes place at night, while it rains. "That makes the special effects easier to obscure," he said. "If you never get a clear look at the monster, you can't see how shoddy it is." In fact, I think the special effects stand up well, considering the movie's age. While Ebert is no doubt correct about the practical reasons for Godzilla's dark storms, they serve an aesthetic purpose as well—adding to the film's sense of foreboding. Ebert went on to criticize Emmerich's flat characters, which makes one wonder how many kaiju movies he'd seen.

Finally, Ebert complained the film was nonsensical. "The movie makes no sense at all except as a careless pastiche of its betters," he said. "You have to absorb such a film, not consider it. But my brain rebelled, and insisted on applying logic where it was not welcome." Again, I think the 1998 entry needs to be placed in the context of the franchise, which frequently has plot holes so large that Godzilla could fit through them. In Godzilla vs. Biollante, widely regarded as one of the best titles in the series, a doctor merges his daughter's cells with those of a rose and Godzilla—creating a massive plant creature. It makes no sense. Similarly, the time-travel plot in Godzilla vs. King Ghidorah is so confusing that fans have concocted an elaborate theory to square the circle. Of course, it would be better if Emmerich's film transcended its genre, but a little context is necessary.

One line of criticism which Ebert didn't engage in his review, but which is frequently mentioned by kaiju fans, is the film represents a significant departure from Godzilla's traditional appearance. Emmerich's creature—designed by Patrick Tatopoulos, whose efforts were honored with a character sharing his name—is a much leaner, more dinosaur-like beast. In short, it's not a computer-generated facsimile of a man in a suit, as Gareth Edwards' Godzilla is. The outrage over Emmerich's changes ring particularly hollow given the rapturous reception for last year's Shin Godzilla. Hideaki Anno's entry is vastly superior, but the changes in creature design are similarly dramatic. Among other revisions, Anno's Godzilla can shoot lasers out of its back and tail!

A point I don't see mentioned by critics or kaiju fans is that Emmerich's vision alters Godzilla's origin story. In the original 1954 film, Godzilla emerges in response to American nuclear tests. This is changed in the 1998 version, which casts the blame upon the French. Jean Reno plays a French secret serviceman sent to America to clean up his country's mess. This unwillingness to deal with our complicated history feels fundamentally American. While Emmerich is German, I can only assume the decision was made to appease American studio heads and audiences. For me, this is more damning than the criticism generally leveled against the 1998 movie.

Kaiju Transmissions, a giant-monster podcast, recently conducted a survey in which listeners named Roland Emmerich's Godzilla as the worst entry in the 31-film franchise. That's ridiculous. There're a significant number of movies in the series with goofy suits, incomprehensible plots, and terrible acting. All Monsters Attack, released in 1969, is largely made up of clips from previous Godzilla films. By the standards of the kaiju genre, the 1998 title is by no means a bad movie—in fact, I'd argue it's pretty good. Any reasonable accounting should recognize that.