The most overhyped movie of the winter is tepid Oscar bait at its best, artless and exploitative at its worst. D 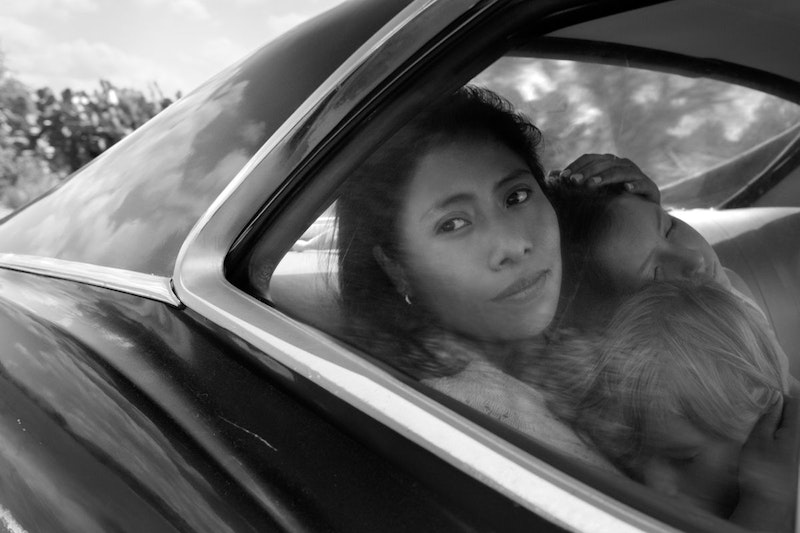 Alfonso Cuarón’s Roma has vacuumed up so many awards and glowing reviews that its hype has become unavoidable, and a measured critique of the film is difficult because by now, most people going to see it in theaters or on Netflix first heard of it via its inescapable critical fawning. After winning so many top prizes at precursor ceremonies, it’s become practically preordained, making an otherwise dynamic (and commercially successful) year look pretty boring. I went to see its last area theater screening on Christmas Eve because three friends of mine—none of who know each other—all used the word “overwhelming” to describe it. Director Sean Baker also described it as “overwhelming,” writing on Letterboxd that he had a “minor anxiety attack while watching it.”

This got me out of the house for a noon matinee—I had high hopes. But this is a dog. Not dog shit, but it’s a sorry state to leave a movie only unable to shake the multiple close-ups of dog shit that pock the family’s driveway (and how embarrassing is it that The New York Times, The New Yorker, The Wall Street Journal, and so many other publications are still too provincial to print the words “shit” or “fuck”?). Roma is not overwhelming, remarkable, or moving: this is a thoroughly pedestrian prestige picture that, for all the praise it’s received, has some of the most bland and boring cinematography I’ve seen this year, shot on lifeless digital and graded on autopilot. It’s not black and white so much as gray, an aesthetic that’s a sad match for its mediocre core. Cuarón set out to make a movie about his childhood and the maids that lived with him, and he has failed, showing himself to be just as removed and oblivious as the jet-setting father that abandons them early on.

Yalitza Aparicio has never acted before, and it shows. Or maybe Cuarón just didn’t give her enough to work with. She plays Cleo, a live-in maid for a wealthy family in Mexico City. She’s as distant and unknowable as the absentee father or the kids she takes care of. In the past, Cuarón has used his cinematography to elevate his narratives, most strikingly in the terrifying Children of Men and the sensual Y Tu Mamá También. But in Roma, there are no vistas or landscapes to sink into, no grand plains—just a nice house and a wealthy family in Mexico City. Cuarón curiously keeps his protagonist at arm’s length, much like the privileged family she works for.

We get to know her only through other people: the violent and immature man who impregnates her. Cuarón wants us to see through the eyes of Cleo, but his gaze stains every moment in Roma, which at its best comes close to the grandeur of Gravity, but more often than not is aimed straight at his navel. The house is closely modeled after Cuarón’s childhood home, and so much of the film is spent slowly panning from one room to another, idling in domestic routines. Critics are besotted by Cuarón’s film because they too feel guilty about having “help”—and their fawning betrays the extent to which they’re willing to actually spend time with poor people: not much at all.

Cleo is given agency and a voice only through her stillborn daughter in a prolonged birth scene telegraphed an hour earlier with a close-up of a broken egg. This is a ghoulish, exploitative scene, the most reprehensible long take in the movie: for 10 minutes we watch doctors talk about “no heartbeat,” and when she finally gives birth, her baby is limp and lifeless, tiny limbs flopping around like a Muppet. They tell Cleo her daughter was born dead, then ask if she wants to say hello, and after she holds her for a few moments, they tell her to say goodbye. It’s a grotesque and artless climax that dares the audience to call its bluff and criticize this painfully realistic stillborn scene. It’s cinematic concrete worthy of a student film, a confused failure of a climax, and Cleo’s anguished cry “I didn’t want her to be born!” is the only time we get any sense of who this woman is.

There are exactly three shots in Roma that struck me, and only one that really moved me: Cleo and her bad boy beau making out in a giant movie theater, Cleo looking out a window at a massive student demonstration turned violent riot, and Cleo rushing into the ocean to save the kids she’s responsible for from drowning. And only in that final sequence did I get a hint of the effect this movie has had on so many people, because it was overwhelming and a powerful synthesis of image and sound that conveys so much interior behavior without any words. The rest of the movie doesn’t come close to that accomplishment.