To Be Moved by Bumblebee

The Transformers series speak to kids’ hearts in a way that's not going to corrupt them. B- 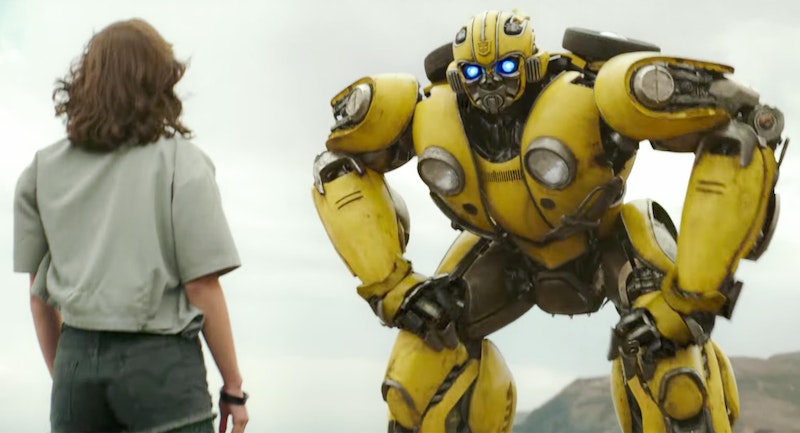 Of all the franchises that have made vast amounts of money in this era of franchises, the most innocuous is also most loathed: Transformers. People usually call these movies stupid—but what they really mean is they hate morally earnest stories. Transformers movies have none of the claim to sophisticated humor and too little of the sarcasm that define clever movies in our times. I suggest that that's a plus. They speak to kids’ hearts in a way that's not going to corrupt them.

I had kind words to say about the previous installment, Transformers: The Last Knight—the one that started with the Arthurian legends!—and this new one, Bumblebee is better, which isn’t a surprise, given the director: Travis Knight, who earned an Oscar nomination for his direction of the impressive Kubo and the Two Strings (2016).

Like the original, this is a coming-of-age story, but instead of a boy, it's about a girl. Hailee Steinfeld (who was very good in the Coen Bros' True Grit) plays an 18-year-old girl who recently lost her father. The family is moving on, but she isn't. The story is her way of working through that suffering and grief in a way that makes her grow stronger. And she really needs it—she listens to The Smiths, so you know that she's pretty much heart-broken all the time. Which brings us to the setting of the movie: the 1980s.

The girl, called Charlie, has to go through an entire fantastic drama involving these transforming robots in order to deal with her loss and, at the same time, grow up. You see her teenage troubles with boys and girls and remember that high school used to be a rich source of drama and trauma for Americans. This wasn’t a rare theme in 1980s high-school movies and Steinfeld could’ve played a tomboy in a John Hughes rom-com. But we don't have any rom-coms anymore, so let's get back to the action-packed stuff.

I was lecturing a few weeks ago at a college and, during the Q&A, someone in the audience asked how blockbusters could possibly be justified as art and gave the Transformers movies as an example of the stupidity of movies in our times. Bumblebee shows that these robots are useful symbols. Charlie desperately wants a car, so she learns to be a mechanic in order to get a clunker and make it run again. Growing up involves both the freedom of a car and the responsibility and skill of repairing it.

This used to be pretty normal in America. Kids might not be that eager to get a driver's license, both because their parents drive them around more and because of Uber and other such services. To listen to some of the enthusiasts of technology, we're the last generation with the ability and the opportunity to drive cars. So fantasy and nostalgia naturally meet to remind us that cars once meant freedom of the soul in America. But as technology has improved, almost no one outside an auto shop has the knowledge and computerized tools to repair cars.

In a nation of Legos and engineering, the Transformer should not be hard to understand, except for critics. These robots are symbols of engineering ingenuity and they're at their best when they play on the ambivalence of our technological powers escaping our control. Part of that is wonder at the enormous possibilities open to us—the democratic freedom that issues forth from our science. Then there is the other, darker part of the story, the terror of unleashing something terrible.

The Transformers are technology moralized—not mere tools, but noble beings in a universe charged with moral conflict. Bumblebee is the third movie this year to remind us that cars, the robots we have become so familiar with that we no longer even think of as robots, have something in common with dogs and horses and that they’re therefore uniquely useful when it comes to dramatizing the passions of children, the need for love and loyalty without speech, and the inevitable heartbreaks and feeling of helplessness of growing up.

Beyond the animal growl of the engine, there’s the experience of power far greater than ours at our command and friendly to the yearnings of our souls. This is where Bumblebee is at its best. We want our girls to be spirited, even manly. That's why we often take them to martial arts classes, that's why we expect them to be as athletic as boys, and that's why we give them men's names—not just Charlie, in this case, but Taylor and Blake and Madison.

Charlie is an all-American girl when she deals with her teenage experience by being tougher. She's told to be nice and embrace the power of smiling, but that therapeutic stuff is no good for a girl who's suffered a great loss. To some extent, coping with the loss of her father forces her to be more like him, and anger is a much better engine than talking about your feelings in such situations. There’s no wishing away the dark passions and the five stages of grief are a pretty stupid idea. Far better to have the companionship of this fantastic techno-beast which has the patience humans don't, because everyone wants to go on with his life.

The Transformers stories could be told better—in this case, it would’ve been good to see an entire act of slapstick high-school comedy involving the robot disguised as an old Volkswagen Beetle. There are hijinks to reward the audience, but they’re somewhat slapdash. The writer didn't make the most of the opportunities these symbols presented her with; the results are often underwhelming. But I look on the bright side. Since everyone else who thinks he's clever despises these stories, the writer-director team have done a job no one else will do and I hope kids will not think themselves too cool or too clever to be moved by Bumblebee.