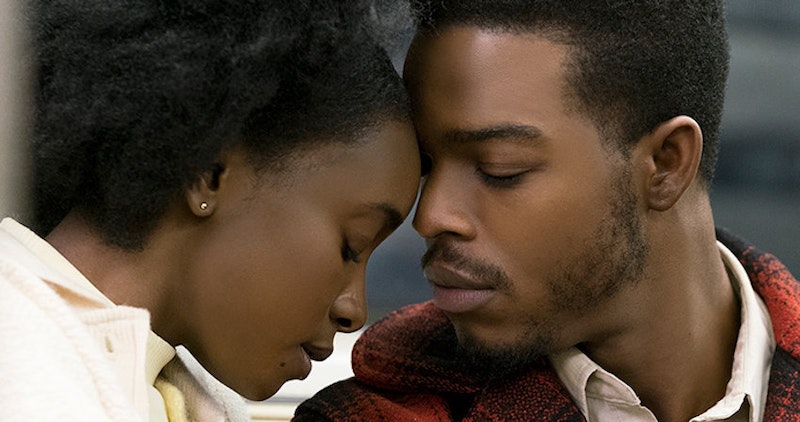 Barry Jenkins has dedicated his new James Baldwin adaptation, If Beale Street Could Talk, to the author (“For Jimmy”), and his reverence hobbles the film: completely faithful to the source material, he’s left us with little more than a museum piece. Beale Street is a nonlinear book and so is Jenkins’ film, with its out of order, remembered events reconstructed in the same order. In Baldwin’s novel, these alternately rosy and righteously angry memories flow beautifully and mimic how our minds often flit through and focus on moments in a relationship in a seemingly arbitrary sequence, a clearing house for the subconscious we have little to no control over. This is the conceit behind Nicolas Roeg’s Bad Timing, the story of a much more toxic and sinister affair. Though the couple at the center of Beale Street—Tish (KiKi Layne) and Fonny (Stephan James)—are practically pious compared to the doomed “sensual obsession” in Roeg’s film, it simply makes for a much less interesting and dynamic movie.

It’s too harsh to call Jenkins’ film a failure, especially since he followed the rules in adapting a famous writer for the screen: don’t fuck it up, don’t sully the material, don’t introduce incongruous elements or updates, and never show off for your own sake. Jenkins has done none of that, bringing Baldwin’s novel to the screen with his head bowed and his fist up. But such blind devotion got the best of his instincts and considerable talents as a filmmaker, because this film doesn’t move at all, it doesn’t sing like Baldwin’s book. Most of the problems come down to the structure, which doesn’t at all lend itself to Jenkins’ very formal approach.

The brilliance of Bad Timing is in its messiness, its imprecision, its speed and its violence. It’s the inner behavior of someone who’s been dealing with an emergency all night, of someone whose lover is on the operating table and might not make it. The stakes are almost as high here, with Fonny facing a false rape charge and a system stacked against him, Tish, and their unborn baby. But there’s no urgency, and though there are flashes of passion, romance and true love, they’re interrupted and mannered. By slavishly following Baldwin’s novel, Jenkins has hollowed it out and left nothing but a set of images and idols lit and photographed in holy light.

The only scene that really cooks occurs within the first 45 minutes of the film. Tish’s family invites Fonny’s family over to tell them that they’ll be grandparents. Fonny’s in jail, and of course the couple never got married—they were just starting their life together (later—but earlier—we see them apartment hunting, swayed on a bare warehouse loft rented by a pointedly woke Jew inexplicably played by Dave Franco). Fonny’s mother (Aunjanue Ellis) is a woman of God, or a “holy roller” in the words of Tish’s sister (Teyonah Parris), and she condemns their “bastard” baby as “born of lustful sin,” and a good old family feud kicks in. It’s raucous, relatable fun, even after Fonny’s father (Michael Beach) slaps his wife and everyone leaves bruised and indignant, clearly ready to fight and willing to die for their children and their siblings.

This is the only scene that got the audience going and involved, and though they paid dutiful attention for the rest of the film, it never came close to that pitch in the theater again. If Beale Street Could Talk is a well-intentioned work, but on its own, it’s somehow both staid and disjointed, a love letter best never sent.