Ridiculous Plot Twists Can Be Oh So Good

Homeland does it again. 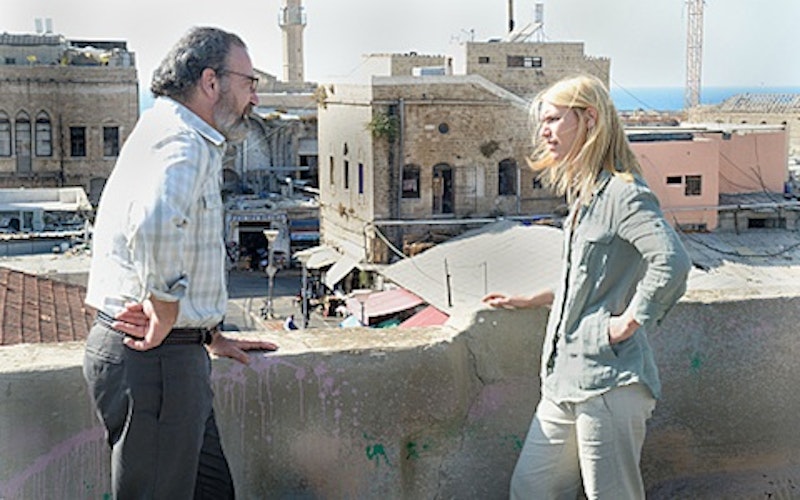 After its recent surprise sweep at the 2012 Emmys, Showtime's hit thriller Homeland is back for a second season. The show won Emmys for both Best Drama and Best Writing in a Drama Series, and co-stars Claire Danes and Damian Lewis won for Outstanding Lead Actress and Actor, respectively. AMC's reign, it would seem, is at end.

If you've never watched Homeland allow me to quickly sketch the plot: Lewis plays Nicholas Brody, a U.S. Marine who was held captive by al-Qaeda for years. The series premiere opens with his rescue and with a warning from a trusted asset to CIA agent Carrie Mathison (Danes) that an American POW has been turned. Unsure if she can trust the warning, Carrie turns to her former boss, CIA Middle East Division Chief Saul Beregon (played by the ever-incredible Mandy Patinkin), who helps her investigate Brody.

Carrie is unstable: a medicated bi-polar obsessed with 9/11 and her own perceived failure to prevent the attacks. As she tells Saul in the premiere, "I missed something once before. I won't, I can't let that happen again." When Saul reminds her that everyone missed something that day, she says simply, "Everyone's not me." And so for half the season we're left wondering, along with Carrie, is Brody really a traitor? I don't think it's any big spoiler to tell you that he is—after all, Danes in her Emmy acceptance speech, applauded Lewis for "the magic trick of turning a villain into someone so human."

If Homeland is merely a more intellectually satisfying version of 24, as many critics have suggested, it still manages to deliver some knockout surprises, with superb acting along the way. And if, at times, it sacrifices believability for emotional appeal, it's no more blatant about it than many of TV's other finest shows. Most fans, I think, are willing to forgive the fact that Brody, in the season one finale, receives a phone call from his daughter inside a secure government bunker minutes after he and top government officials are rushed there, because the scene itself is so perfectly fraught with tension that we just don't care about a minor blunder like that.

Likewise, season two's most recent episode, "Beirut is Back," features a plot contrivance that's completely ridiculous if you think too hard about it. Carrie, brought to Beirut to talk to the wife of a top Hezbollah commander, an asset she’d recruited years before, is given info about a meet between Hezbollah and Abu Nazir (the al-Qaeda terrorist who turned Brody). After an assassination attempt on Nazir fails, Carrie and Saul have to rush the wife to safety, and as Carrie quickly ransacks the commander's apartment for any valuable information, she just happens to grab a bag with Brody's taped confession (to the season one bombing he never committed) sewn into the lining. The episode ends with Saul finding the tape and watching the confession. This is really just impossibly coincidental. And yet that doesn't matter at all. As Todd VanDerWerff writes at The A.V. Club:

...that particular item being in that particular place and being grabbed by that particular person at that particular time strings way too many coincidences together in a way that sort of falls apart if you start to think about it too hard. Yes, coincidence is the thing that drives drama, but there comes a point where it just becomes too much, and "Beirut Is Back" nudges up against that point. But it doesn’t matter because it was still awesome.
Indeed, Homeland scores points for making a revelation this big and this early in season two. After all, with Brody a newly-elected Congressman who no one, not even Carrie, suspects anymore, Homeland could have strung us along for a while, with Brody earning the Vice Presidential nomination and Carrie working to stop some new terrorist plot. Instead, Homeland won't be holding back, and even if this goes to shit later in the season, I applaud any show that takes risks like this.