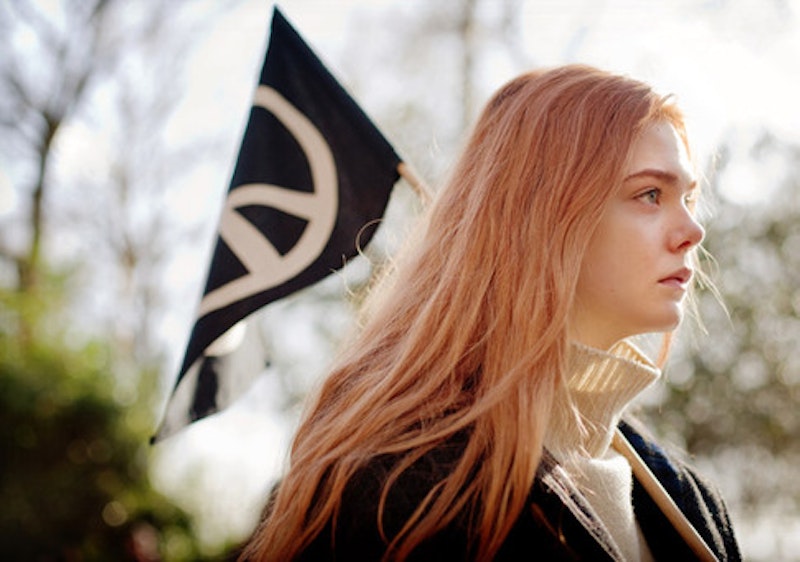 Why does your film matter? Why does it deserve to be made? Questions filmmakers are consistently asked—or ask themselves—in the elusive pre-production search for funding. Sometimes, filmmakers choose to set their narrative against a historical event. It’s not necessarily a bad move: it lends a degree of authenticity and air of relatability for those of who were there when that very time (and place) transpired. But it’s also a double-edged sword. If its purpose as a backdrop goes unfulfilled, it can make a film feel insignificant. Sally Potter’s Ginger & Rosa is an apt example of the trappings a historical setting can cast upon a film that really wants to tell another story.

Ginger & Rosa, which made its American premiere Oct. 8 at the New York Film Festival after securing distribution at TIFF, follows the best-friends-since-birth growing up in 1962’s London outskirts. Rosa (Alice Englert, Jane Campion’s daughter) takes the reigns as she and Ginger (Elle Fanning) venture down back alleys, into boys’ arms and cars, and to rallies, a nod to the presumed imminent missile crisis that lingers over the film less like a black cloud and more like a superfluous gnat. What Potter truly wanted to make a film about, I gather, was the betrayal of young (platonic) love. Once Ginger’s parents, the narcissistic teacher, Rowland (Alessandro Nivola) and a beleaguered homemaker (Christina Hendricks), split up, Ginger’s father strikes up a romance with Rosa.

Despite the nearly 20-year age difference, the two understand each other. They were both abandoned by a parent. They are both looking for saving. Here is Potter’s opportunity to explore the conceit between inner turmoil and the external world at large. In a potentially powerful scene, Rosa remarks that while the increasingly zealous Ginger is fighting an uphill battle to try and save the world, she’s perfectly satisfied just saving one man—Rowland. Unfortunately, the set-up is sacrificed in favor of melodrama, and the aligning of the film’s climax.

As beautiful as the film is, it suffers most from—its shoddy editing and terrible English accents notwithstanding—a neglected historical context that somehow manages to render the central conflict inconsequential. Ginger & Rosa would’ve been a much more powerful film if the love triangle was cast not against protests, but within a vacuum. Ultimately, Potter can’t decide which storyline she wants to focus on—protest or betrayal—resulting in the neglect of both.