The Perks of Being a Wallflower is a triumph. 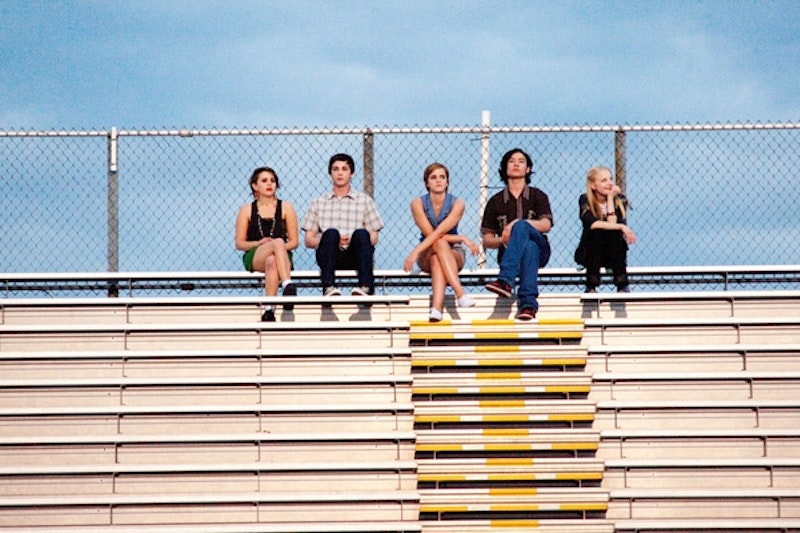 Stephen Chbosky’s 1999 epistolary novel The Perks of Being a Wallflower is an adolescent classic, a book about starting high school with no friends, no life, and a stilting quietness that renders all human contact totally superficial. In the film of the same name, Charlie (Logan Lerman), is the stand-in for the precocious, socially inept, slightly misanthropic middle-class white kid, a bookworm shut-in lusting to experience his youth with other like-minded loners, and strikes gold by befriending seniors Patrick (Ezra Miller), and Sam (Emma Watson), a crush-at-first-sight drop-dead gorgeous and hip young woman who lives and breaths The Smiths, Sonic Youth, and The Beatles. Stop me before I keel over! If you’re of a certain demographic—white, comfortably middle class, feel smarter than the people around you and hopelessly lost as to how to deal with them—Sam is your angel, and the ennui they share will feel very familiar. The Perks of Being a Wallflower succeeds in exactly the right balance of sincerity and earnestness without veering off cliff into cornpone—it’s a serious triumph and one of the best movies of the year.

Writers, authors: direct your own adaptations! I think the success of Perks boils down to Chbosky writing and directing. He nails every nuance and aesthetic detail of his novel with deft precision: everything from the casting, the rearrangement of certain events, to the sensually grainy and vividly colorful film stock capture the book’s essence better than the book itself. Given the subject matter and the relative comfort of all its characters, Chbosky’s story risks coming off as cloying or whiney—Charlie can’t work up the courage to ask Sam out and there are millions of children orphaned by AIDS halfway across the world. It’s not an issue. Most of us have felt like Charlie at some point, and if not, you’re probably an asshole. Where so many other high school films come off as being made by and for them, or where others (Ghost World, Heathers) take a darker and more nihilistic approach, Perks is refreshingly optimistic and inspiring, utilizing a brilliant musical cue of David Bowie’s “’Heroes’” at the very end, a song that, unbelievably, none of the three friends even recognize as a Bowie song. It’s the only piece of this film that doesn’t quite fit, and it’s insignificant.

Both times I saw the movie last weekend, one at 9:30 and another 1:30 matinee, the audience was packed with fresh-faced teens with copies of the book under their arms and girls they’d like to impress in tow. Both showings ended with rapturous applause. The cadences of the dialogue, the way characters talk to each other and goof around, the casual but not dire substance use, wanting that one kiss and just waiting for another to say “I love you”—it’s all disarmingly spot on, to the point that you’ll find yourself flashing back to your own high school experience, surprised by how neatly it all matches up. Charlie isn’t a loser, a nobody, he’s just a wallflower—and he wants friends, he wants to be loved. Here, for once, he’s not on the outside: with a supportive family and godsend friends, he finds the people that really love him. The Perks of Being a Wallflower is a soaring work, a vision of the perfect high school experience, and I left both screenings totally high. Any movie that can make you feel like that is worth your time; it’s the reason we go to the cinema in the first place, and Perks is a reminder of how rare that experience is.