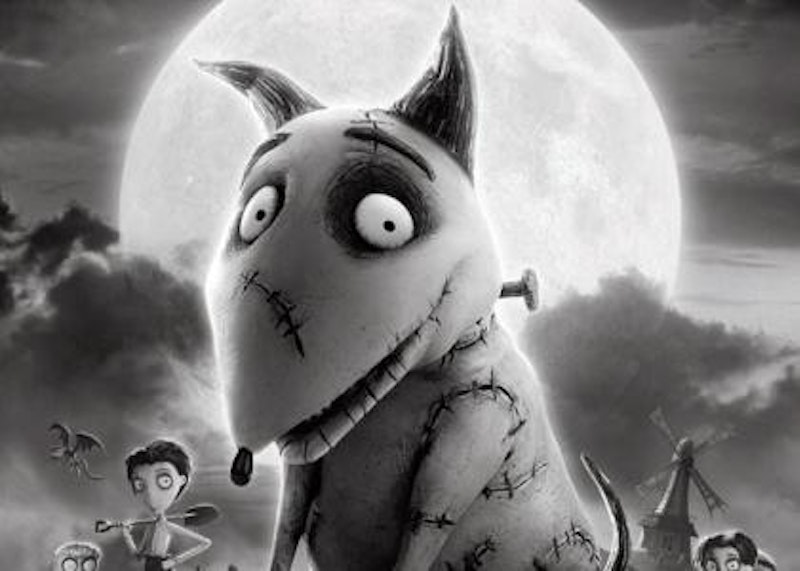 If you’re a diehard Tim Burton fan, you cringe a little when a new movie of his comes out. You think to yourself oh God Tim Burton, don’t disappoint us. Please make this one a Nightmare Before Christmas and not a James and the Giant Peach.

So, months ago when I heard about the black and white 3D stop animation movie Frankenweenie coming out, I prayed and said Beetlejuice three times wishing for a winner. I took my kids to see the film last week and I was not disappointed. Disclaimer: I loved Dark Shadows when a lot of people didn’t, and have few bad things to say about anything that comes out of the genius brain of Burton.

There are many varied opinions on the success of Tim Burton’s films. You either love films like Ed Wood and Sleepy Hollow and Sweeney Todd: Demon Barber of Fleet Street, or you don’t.  Or, your opinion of Burton is related to whether you like Johnny Depp or not, since he stars in all the aforementioned films and most of Burton’s other movies. It’s quite a Director-Leading Man bromance, if you ask me, though usually Depp’s domestic partner, the amazing Helena Bonham Carter is quite often involved in the lovefest as well (in addition to Sleepy Hollow, they’re also both perfect in Alice in Wonderland and as the main voices in Corpse Bride).

Nobody would say Burton is perfect. To like Mars Attacks and Big Fish and Pee Wee Herman’s Big Adventure, you have to have a lot of love for the director’s quirky outlook on the world combined with ironclad dedication to his vision. I went to MOMA in New York last year and saw the exhibit of his work. It included early drawings from his childhood, the actual figurines used to film Nightmare Before Christmas and Corpse Bride (which tie as my two favorite Burton films), and what I thought was the best part of the exhibit: his old desk pad, completely covered in doodles you could tell became future characters.

Back to Frankenweenie. Composer/musician Danny Elfman has thankfully returned with his amazing talent. Spoiler alert: it’s the story of a kid whose dog dies and then he uses shady science to bring it back to life. It’s exactly the story of Pet Sematary by Stephen King, only it’s not a haunted graveyard that brings shit back to life, it’s lightning, like in Frankenstein.

As a parent of four kids, I have heard some “oh it’s too scary” murmurings and in fact, the theater next door sold out Hotel Transylvania and there were plenty of seats open for Frankenweenie. I don’t understand this, since both films are rated PG, but I guess the Burton film seems like it would be scarier, so many parents are afraid of scaring their children. I am not the kind of parent who shields my kids from scary things. Also, the movie isn’t really scary. I mean, the dog getting hit by a car scene? Yes, it’s sad.

So for parents who do not want their children to ever know about death and scary things (aka pussies), they might want to steer clear. My kids are huge Tim Burton film fanatics. Mostly because I can’t stand watching lame children’s movies that don’t give a shit about simultaneously entertaining parents.

Another fun thing about Frankenweenie is the number of references to other Burton movies sprinkled throughout. I’d read The New York Times’ interview with Tim Burton and he said he normally didn’t make references to earlier films in his movies but couldn’t resist some in this one, so I had been eager to find them, like a mini in-movie Burton Easter Egg hunt. The most obvious one isn’t even hidden—the main character, who looks exactly like Victor from Corpse Bride, is named: Victor. Mr. Burgemeister looks just like both the mayor on Nightmare Before Christmas and Finis Everglot in Corpse Bride. There are others: I will let fellow Burton fans find them.

Go see it. The combination of old school black and white meeting the new technology of 3D combine to make a uniquely artistic blend of cinematic experience. Also, it’s a fun movie. And fun never gets old.