The apocalypse of envy. 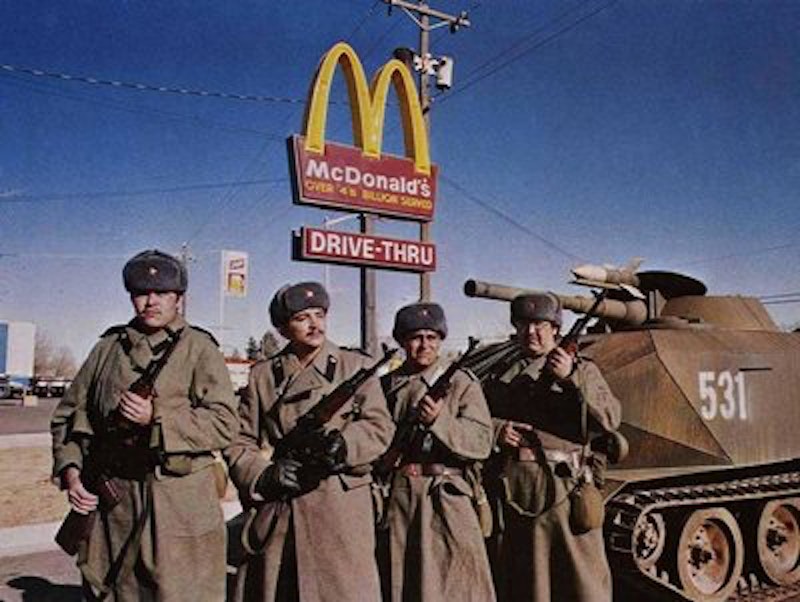 This is the 11th post in a series on political films. The tenth, on The Day After, is here.

Dystopias are always utopias in disguise. Imagining the end of the world is a chance to see scores settled and dire prophecies fulfilled.  The apocalypse is the ultimate exercise in schadenfreude—as well as a delightful opportunity to imagine shit blowing up.

Red Dawn (1984) is a perfect exemplar of world's end as smug warning—a right wing fever dream meant to refute the peacenik coastal leftists once and for all.  The film imagines a world in which the United States is invaded from the south by the Russians with Nicaraguan and Cuban allies; a group of high school students in Colorado take to the mountains, turning themselves into a guerilla unit.  The Reds set up concentration camps and institute a reign of terror; they take guns from the cold dead hands of the overwhelmed, heartland Americans, whose corpses lie in front of their signs with the slogans about guns and cold dead hands. The second amendment, and the stockpiling of ridiculous numbers of weapons, is now the only hope for Americans fighting the marauding commies. Reagan was right about everything, from the Red menace to the need to fund the contras. All those who doubted him—guess you're sorry now, huh?

Red Dawn certainly resonated with the kind of vindictive smugness which Trump summons up every time there's a terror attack. But it's real emotional investment is, somewhat surprisingly, elsewhere. The satisfaction of the film is partially in the vision of anti-communism vindicated, but more important is the emotionally resonant vision of white American high school kids turned into courageous, oppressed resistors. Most of the film follows a passel of boys and girls hiding out in the mountains, launching desperate terror attacks on the Red army; the kids call themselves "Wolverines" after the local high school football team. The apocalypse is staged so that the United States can see itself as the underdog.

The film is entirely self-aware about this.  The moral center of the movie is Colonel Ernesto Bella, a Cuban fighter played with soulful melancholy by African-American actor Ron O'Neal. Bella has been a resistance fighter himself in the Cuban Revolution and in other Cold War conflicts; he is familiar with the mechanisms of guerilla war. More, he is nostalgic for his own days as a resistance fighter, and uncomfortable in his new role as the imperial conqueror and policeman. "I was always on the side of the insurgents," he tells his bloodthirsty superior. "I have no experience in these matters. But it would seem necessary to win the support of the people. As our opponents used to say in Vietnam, 'Win their hearts and minds.'"

Bella's role reversal puts him, uncomfortably, on the side of the American invaders in Southeast Asia. "It seems a thousand years since I was a small boy in the sun," he writes to his family back home. "How did I come to this high, desolate place where there is nothing but loneliness?" Directly, Bella is contrasting the warmth of Cuba to the frigid winter of the Rockies. But he's also talking about the loneliness that results when you climb out of the subaltern position to the heights of power. Bella has lost the moral low ground. He is cold because he is wrong, and knows he's wrong. When he gets the drop on members of the Wolverine resistance at the film's end, he refuses to shoot them, because he knows their fight is virtuous.  As in so many American films, a black man, carrying with him the weight of the injustices inflicted upon him, gazes at white men, acknowledges their virtue, and thereby provides absolution.

When political writers talk about Trump's appeal, they generally point to resentment. White men—his core supporters—feel like they are losing standing and position. They mumble and groan about "political correctness"—the insistence that they take the feelings of women, black people, and people of color into consideration.  Trump speaks for those afraid that their power is leeching away; and he offers them the thrill of power regained, through walls, guns, and the not-very-buried threat of violence against the marginalized.

Red Dawn, though, suggests that nativism is actuated not just by anxiety about power, but by anxiety about goodness. As black people, and women, and Native Americans gain more of a voice in public discourse, white people, and men, and Europeans are placed in an uncomfortable position. Suddenly, white men are like Bella, confronting the fact that they stand in the position of the oppressor. They're the bad guys—and they want to climb down off that high lonely mountain, back to a place where they can feel good about themselves.

Red Dawn is not (just) a nightmare of America's conquest. It's a fantasy of America's righteousness. As James Baldwin said of a similar dream of Jack Keruoac's, "this is absolute nonsense, of course, objectively considered, and offensive nonsense at that." But, he added, "there is real pain in it, and real loss, however thin; and it is thin, like soup too long diluted; thin because it does not refer to reality, but to a dream." Bella, through a clever reversal, expresses the pain of the imperial conqueror, who stands amidst the corpses of his enemies, and feels, dimly, that he no longer admires himself quite as much as he wishes he could. If only, he thinks, my victims would rise from their graves on some red dawn, look upon my pain, and pity me.