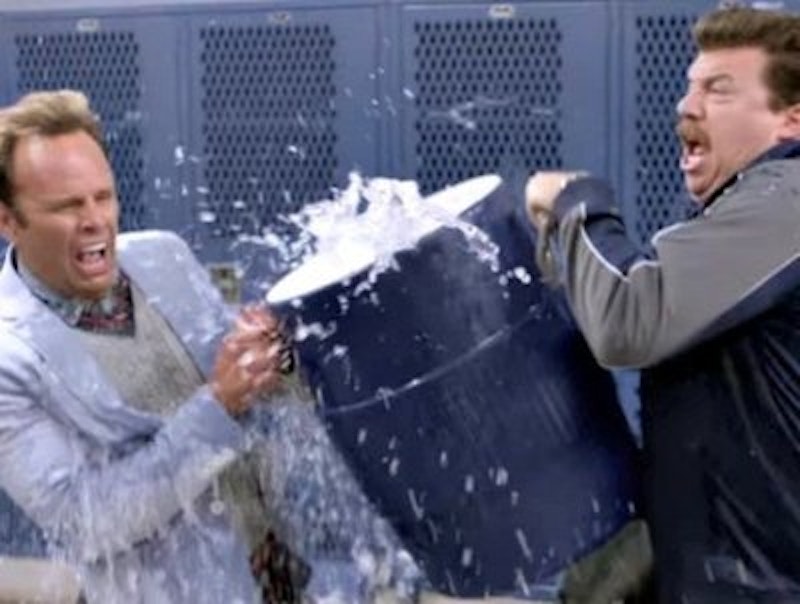 The new HBO comedy series Vice Principals asks viewers to inhabit a dark place many want to avoid. Not everyone is wired to get laughs out of despicable behavior. Dark and mean, even in the comedy format, are tough to fit with the progressive worldview that values optimism and the steady improvement of human nature.

The two vice principals at the center of the show, played by series co-creator Danny McBride and Walton Goggins, aren't just unpleasant or ethically challenged—they’re full-blown sociopathic criminals who will do anything to wrest away the job of their new principal, Dr. Belinda Brown, so that one of them can claim it. This is the story line of the entire show.

Vice Principals ventures into realm of taboo, so it's not for everyone. The show's creators, McBride and Jody Hill (formerly of Eastbound and Down), know this, and halfway into the second episode they just went for broke. That's when they had the two white vice principals—McBride’s Neal Gamby character and Goggins’ Lee Russell—burn down the house of Dr. Brown, a black woman with two sons.

It was a jarring scene. The escalation of hostilities against the principal came so fast and without any warning. You couldn't help but feel like shit, but after the shock wore off, I decided it was a sign some good, subversive laughs were on the way. I’m sure many bailed on the program at this point.

Dark comedies like Robert Altman’s M*A*S*H and John Waters' Serial Mom asked us to laugh at the atrocities of war and serial killers, but race is often too much. It didn't take long for superficial, knee-jerk accusations of racism to arrive, although none of the story exposition indicates the two protagonists are racially motivated in any manner. They're just nakedly power hungry, and the person who they're out to destroy just happens to be black. A black person who fights back, by the way.

Jen Chaney, writing for Vulture, admits that the show doesn't condone the despicable behavior of two obvious losers, but then goes on virtue signal with, “Do we really need to be laughing at two white dudes having so much fun trying to destroy a black woman,” not mentioning that Brown tasks Lee Russell with menial personal errands for her, and then calls him her “bitch” behind his back. It's not completely one-sided.

Chaney’s message is certain things can't be entertained in polite society, just because they “look bad.” Not a real deep thought from a critic, plus it's disrespectful towards Kimberly Herbert Gregory, who accepted the role of Dr. Brown, a strong and accomplished woman, knowing full well that it wasn't about race.

For The Washington Post, high-minded TV critic Hank Stuever wrote that the show has an attitude and a maturity problem, adding that it was “puerile.” Quite often, these are code words for “funny.” In his idealism, Stuever imagines a much better, PC story lurking just below the surface. If only the show's creators had had his vision, they’d have written a “more serious dark comedy” called Principal, in which “a minority female administrator gets assigned to a school where two of her white male colleagues are trying to undermine her authority.” I didn't make that up. In other words, change the entire theme away from a criminal lust for power into a commentary on the systemic racism imposed by white men. Sounds hilarious.

Stuever’s alternative story sounds limp and deprived of Vice Principals’ edginess, but as a member of the white male patriarchy, he also feels the need to signal his virtue. Descending into utter cluelessness near the end of his review, he bemoans the fact that Vice Principals doesn't attain the “verisimilitude” of other painfully real satires such as Veep and Silicon Valley. The show is a dark comedy, not a satire, and the last thing it's striving for is verisimilitude.

It's not the critic's job to tell us what we don't “need” to see or offer ridiculous alternative programs. Vice Principals is the funniest show I've seen on TV or the big screen in years. McBride, with his goofy mustache and short-sleeved shirt/necktie ensemble, teaming up with the menacing, dapper Goggins (he's the real evil one of the duo) to torment Dr. Brown is very funny stuff, as long as you don't let others think for you. If dark comedies followed politically correct rules, they wouldn't be dark comedies.