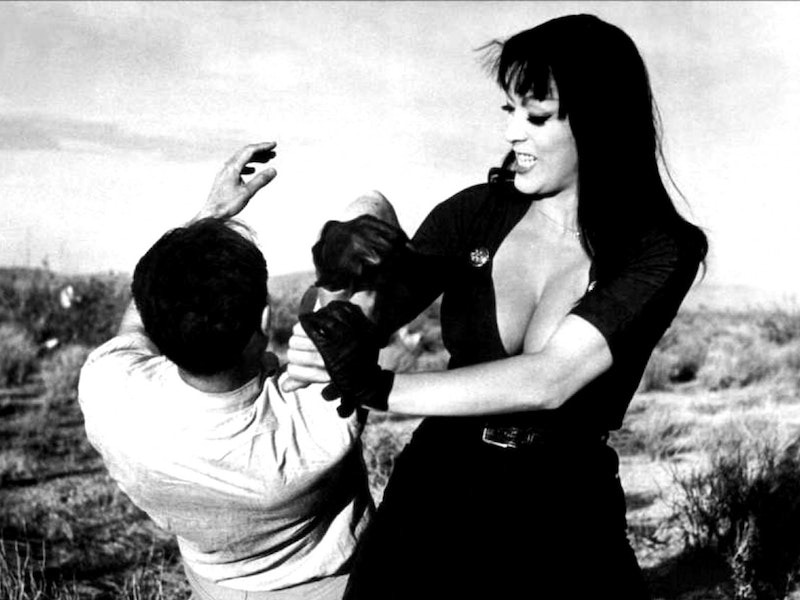 Exploitation movies, also known as “grindhouse cinema” or B-movies, generally featured some element that can exploited and for the most part, it was violence, gore, and sex. Our current culture doesn’t allow for such endeavors anymore, and the only director who’s come close to remaking and continuing the tradition of exploitation cinema is Quentin Tarantino.

One of the great directors of exploitation movies was Russ Meyer (1922-2004). It’s difficult to imagine that someone like Meyer could make movies in today’s climate of PC nonsense. Meyer made his mark on the cinematic world by making sexploitation movies, which were often campy and always featured large-breasted women.

Most exploitation movies were pretty bad. Every so often, however, comes a movie that has all the elements of an exploitation genre but it’s also well made. This is the case with Meyer’s Faster, Pussycat! Kill! Kill! (1965), which features three go-go dancers who journey through the American desert causing chaos in the form of kidnapping and multiple homicide.

One of film’s stars, Tura Satana, plays Varla, who’s the brains and the leader of the female gang. She’s what we might call an Alpha Female: she knows what she wants, she’s dressed in skin-tight leather, her large breasts are perfectly exposed, she only knows how to be violent in response to any man’s sexual advances. She has no patience for any misogyny, however unintentional and harmless it may be. Varla’s most interested in enacting rage and violence.

Her companions, Rosie and Billie, are also strong personalities. Rosie’s a lesbian and has a fixation on Varla, expressing both love and hate toward her at the same time. She has a terrible put-on Italian accent and no patience for stupid men.

Billie’s more of a ditzy blonde, very heterosexual, and in constant pursuit for another roll in the hay. Despite her disposition, Billie inhabits a strong, female persona as well, especially in her forward and somewhat forceful way of seeking sexual pleasure.

All three women are driving fast cars, a very masculine choice, and on their drive, they encounter a young, “all-American” couple (Linda and Tommy) who are running a time trial on the salt flats. It’s all fun and games until Varla goads Tommy to race. Things turn ugly—primarily because Varla and Rosie are antagonistic and sadistic for no apparent reason—when Varla murders Tommy, drugs and kidnaps Linda.

It’s uncertain where they’re actually heading, except that they’re in search for another fix of violence and sadism. At the gas station, the women notice an old man in a wheelchair helped by his dumb and slow son, and they learn from the gas station attendant that the old man has a big stash of money somewhere in his house—a settlement he received for his accident that left him a cripple.

Varla hatches a plan to rob the old man under the pretense that they need food and water. The old man is suspicious about the women’s intentions. He ogles them with the appetite of a dirty old man, especially the young Linda who, scantily clad in a bathing suit is crying and desperately trying to escape the clutches of mostly Varla and Rosie. Billie, as expected, is looking for pleasure in the flesh of the Vegetable, and is generally unconcerned with the plan to find the money stash. What ensues is more violence, fights, twists, and more deaths. But somehow in all of this mess, the all-American innocence wins.

Despite the fact that the acting is pretty bad and stilted, Faster, Pussycat! Is fun and absurd. The men in the film are both caricatures and real depictions of low and trashy masculinity, and their entire existence revolves around the barrenness of the land and the curious lack of women. The break in their daily grind comes from the violent grind they receive from Varla, Billie, and Rosie.

The women represent different aspects of female power: Varla’s only interested in sex if it gets her something else that she desires, and more than anything, she wants to repeatedly enact revenge; Rosie rejects men by virtue of being a lesbian; and Billie demands sexual pleasure. Not only has Meyer made an exploitation film, he has, paradoxically made a film that glorifies women.

Satana’s portrayal of Varla is perfection: she has physicality that straddles both feminine and masculine aspects and ultimately, it is Satana who carries the film. Without her, there would be no grounding or depth to the actions in the film. Satana herself was allegedly gang raped when she was in her teens, and later enacted revenge on her attackers. She even belonged in a female gang, so it’s not a stretch to see her in such a role.

Just like most exploitation movies, Faster, Pussycat! Kill! Kill! reveals something more about the culture of that time than grindhouse cinema. There was clearly a demand for such movies (despite the fact that this one tanked in the box office) and the audience indulged in various fantasies, however violent or sexually charged. I’m not finding any virtue in grindhouse cinema—its seediness alone is not something to aspire to, but in our current gridlock of PC absurdity as well as some of the false and misplaced claims of the #MeToo movement, humor and sex are effectively dead.