Blood Quantum, a new Canadian film out now via VOD, presages our plague times. B 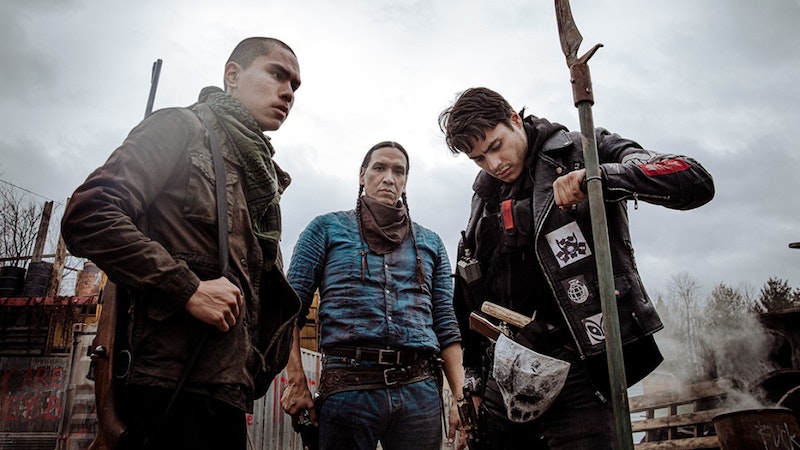 For the zombie movie genre to make use of political allegory isn't a new idea. Night of the Living Dead did that, as did its various remakes, sequels and imitators, all the way to last year's underrated Jim Jarmusch lark The Dead Don't Die.

Blood Quantum, a new Canadian indie film from writer/director Jeff Barnaby, gives those zombie movie conventions a new spin. It isn't a classic of the genre, but Blood Quantum certainly has something to say—and also gets creative in the delivery of splatter.

The setup is that there's a zombie outbreak underway on a First Nations reserve in Canada. The twist? The Indigenous inhabitants are immune to the zombie infection. But the immunity isn't the end of their problems, as the natives are soon joined by a group of white refugees, seeking a cure, with the zombies themselves not far behind. The political allegory isn't subtle, but it nevertheless lands.

The outbreak is introduced in a cleverly extended prologue, as we see a fish and then a dog coming back to life as zombies, followed by the initial outbreak, which includes the creative deployment of a chainsaw. Following a time jump, the plot begins in earnest, with most of the main characters played by Canadian actors of First Nations heritage.

Michael Greyeyes plays Traylor, a tribal sheriff, who leads the survivors along with his ex-wife (Elle-Máijá Tailfeathers). His two sons are Lysol (Kowa Gordon), who mistrusts white people, and Joseph (Native-American actor Forrest Goodluck, of The Miseducation of Cameron Post), who’s trying to protect his pregnant white girlfriend. The great Gary Farmer, of Dead Man and Smoke Signals, shows up too.

The movie often resembles the structure of The Walking Dead, as scenes of gruesome zombie attacks alternate with those of groups of human survivors bickering with one another. But it's not nearly as banal as that show, even if the historical political references aren't up to the level of a Get Out.

Does the film have newfound resonance in the age of coronavirus? Only if you're reaching. There's an infection, and the characters are advised to stay inside, but Blood Quantum is about something very specific, and it's not that. Be ready, though, for lots of blood, gore and decapitations.

The title Blood Quantum comes from an old term for measuring the percentage of individuals' native blood. It began as something governments did to limit the citizenship of tribes, while some tribes still use it to determine citizenship. Barnaby, the director, is of the Mi'kmaq tribe, and grew up on a reserve in Quebec. He's described the film in interviews as "Native exploitation."

Blood Quantum debuted at the Toronto International Film Festival last year and is now streaming on the horror-focused streaming service Shudder, although a theatrical release had been planned pre-pandemic.