Clark Duke's directorial debut Arkansas is a very good thriller in the vein of the Coen Brothers. B+ 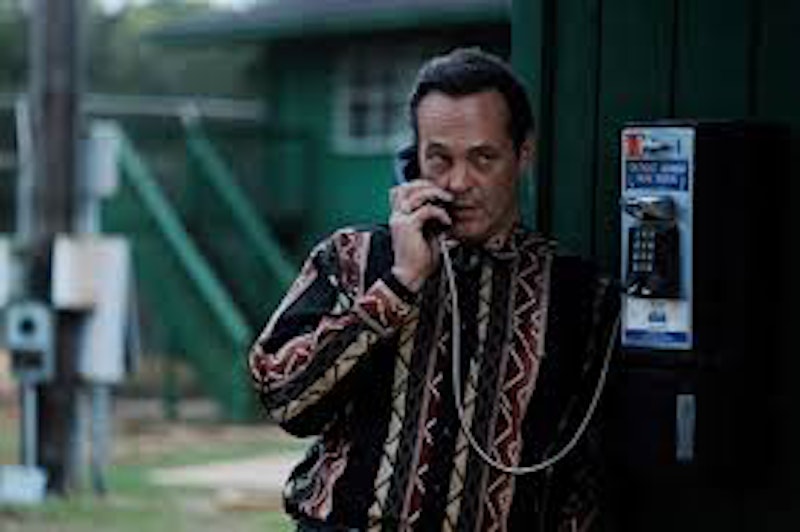 One of the better movies to arrive on VOD is Arkansas, an atmospheric and at times darkly hilarious Southern crime picture, based on the novel of the same name by John Brandon. It's the successful directorial debut of Clark Duke, the goofy character actor probably best known for his role in the Hot Tub Time Machine movies.

Like the Coens with Fargo, Arkansas native Duke has set a crime film in his home state, featuring chatty criminals and surprising violence. It's nowhere near the level of Fargo, but Duke shows some promise as a filmmaker, who wasn't afraid to try something risky his first time out. Arkansas doesn't have any grand statement to make about crime, drug-dealing, or organized crime, other than the protagonist's brief aside that unlike La Cosa Nostra, the Southern criminal organization for which he works has no codes or traditions.

That protagonist is Kyle (Liam Hemsworth), who works for a mysterious crime lord known as "Frog," with whom he has only ever communicated through go-betweens. As the film begins, Kyle receives orders to accompany Swin (played by Duke) to the titular state, with a truck full of drugs. Things go sideways when they appear to be stopped by a park ranger (John Malkovich), but a few twists and turns later they end up working in the park and using it the base of their drug business. While they've been told to blend in during their time in the Razorback State, Swin strikes up an unlikely romance with a local woman (Eden Brolin, daughter of Josh.)

The film goes back and forth between the main plot and the 1980s backstory of Frog (Vince Vaughn), and the rise of his multi-state Southern drug empire. The stories eventually intersect, but not before dead bodies pile up. Among other virtues, there are some outstanding names in this movie—the main characters are named "Kyle Ribb" and "Swin Horn," and other characters have monikers like "Frog," "Her," and "Almond."

Hemsworth, not the most charismatic leading man, holds his own in the lead role, while Duke, in addition to directing, reprises his familiar role as a funny sidekick, even delivering a memorable monologue about breastfeeding. Vaughn continues his recent career renaissance, in which he's excelled in such grubby crime movies as Brawl in Cell Block 99 and Dragged Across Concrete (and also, for some reason, on the latest Curb Your Enthusiasm season). Here, he convincingly plays at different ages, with the aid of a dramatic spray tan in the 1980s scenes. It's also great to see the long-absent Vivica A. Fox. Only Michael K. Williams, of The Wire, doesn't get much to do, in a part as Vaughn's rival in the 1980s scenes.