Three legal films—Fracture, The Paradine Case, and My Cousin Vinny—and the eras that date them. 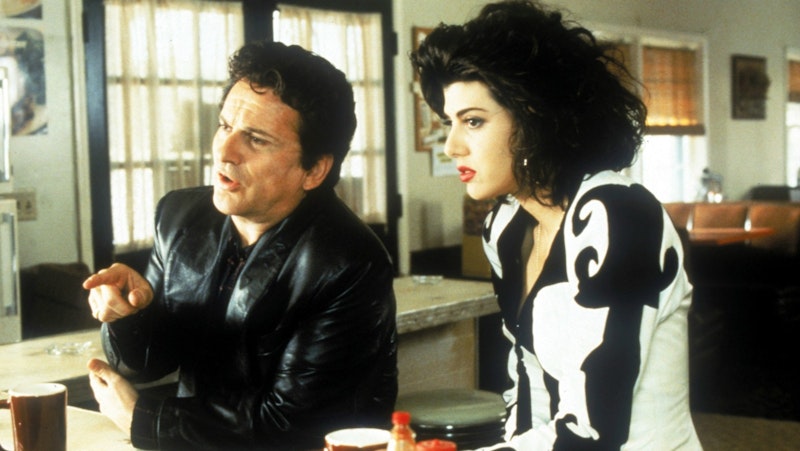 A couple of months ago when the quarantine started, I started writing about films from 2007, a series that didn’t make it past three articles (on Grindhouse, I’m Not There, and Black Book—a 2006 release for the rest of the world). Just five years before, something like The Mothman Prophecies could be made for $35 million with major stars; now, Blumhouse would produce it for under a million with a couple of podcast hosts.

Fracture, released in April 2007, would never reach theaters today: this is a boilerplate legal thriller whose only draw is its two stars: Anthony Hopkins and Ryan Gosling. Hopkins, 16 years after The Silence of the Lambs, was still happy to bake bread phoning in Hannibal Lecter imitations—he has nothing to do in this movie but wink and be cheeky. David Strathairn gets third billing and shows up for three scenes.

This is Gosling’s “vehicle,” a pro-forma studio exercise for a rising star, who hadn’t done much yet besides sleeper hit The Notebook. His performance in Half Nelson, from 2006, has stuck with me—he plays a middle school teacher in an inner city public school, addicted to crack, worn out, and rail thin. In Fracture, Gosling looks five years younger and a decade out of style: his suit is early-1990s baggy, and his baby teeth haircut is a disturbing approximation of Trey Gowdy’s upper half. Gosling never has to try hard to be cool, and he’s almost always compelling—or, at the very least, funny—and he makes Fracture watchable.

There’s almost nothing distinctive in Fracture, nothing loud and provocative or memorable—except the way the camera moves. Director Gregory Hoblit and cinematographer Kramer Morgenthau had the money to bring a crane everywhere they went, they had the money for a robot camera that could rotate at extreme degrees and twist over its subjects. All actual objects, too—this movie contains no noticeable CGI. In Fracture, there’s a murder and a suicide, and many police crime scenes, many opportunities for the camera to pirouette over the proceedings like a Boston Dynamics’ falcon.

The type of legal action-drama that Fracture tries to be was nailed with The Lincoln Lawyer in 2011, which is still compelling. Fracture is stuck in its time, full of disgusting dark cinematography and puddle yellows and greens and—relatively sparingly—that goddamn “handheld” shit. The other night I finally got around to Alfred Hitchcock’s The Paradine Case, one I’ve avoided for a while. From 1947, it’s generally considered one of Hitchcock’s least successful films, and unlike most of his work, severely compromised by overzealous and amphetamine-mad David O. Selznick.

The Paradine Case is another snoozer murder mystery legal drama, with less action but about as much court time as Fracture—we only enter the chambers an hour in. But there’s nothing here, no pulp, only Hitchcock’s immaculate composition and the faces of its impressive cast, including Gregory Peck, Alida Valli, Ann Todd, Charles Laughton, and Charles Coburn (the better Charles). I watched it late at night with the sound turned way down, and caught maybe half the dialogue. It still held my attention, but even a master can only do so much with a tedious script and an interfering producer.

My Cousin Vinny is the best courtroom movie I’ve seen recently, and it was another spontaneous weekend pick at the house. I’d never seen it, only known about Marisa Tomei’s allegedly compromised Oscar. Looking into it, I suppose Rex Reed had a bone to pick—maybe he was friends with Vanessa Redgrave. In any case, her performance is the best thing in the movie, which is just juvenilia kept afloat by Tomei and Joe Pesci as guido suprema. Ralph Macchio, after being arrested for a murder he and his friend didn’t commit, does nothing but give that hangdog, semi-salacious downward gaze on every teen comedy poster around this time through the millennium.

Despite its frivolous form, My Cousin Vinny is the more gripping courtroom drama, not least because it’s (apparently) one of the most accurate depictions of the trial process ever put to film. No, it’s Tomei pirouetting around the English language and Pesci hamming it up that make this two-hour film not just watchable, not just good, but teachable: My Cousin Vinny initially demonstrates the intelligence and maturity of Family Circus before throwing two New York caricatures into an eventual more brutally depicted South, hostile to all ethnic customs such as flavor and improper diction.

These three films all end in the courtroom, and were all made with a lot of money for a mass audience. You can place each of them exactly in the time they were made—1947, 1992, and 2007—but only My Cousin Vinny still works, still more than a curio. It’s okay. Watch it with your family. Did you laugh? You’ll laugh.

Looking back at 2007, there’s little to lament or regret. A film like Fracture doesn’t need to cost $10 million (although it made around $39 million in the United States, and nearly $92 million worldwide—who knew?). This isn’t a defense of defunding the adult drama, and any “cinematic universe” ghettoizes itself from the rest of cinematic society—the grass was not greener in 2007. One’s taken aback witnessing how much money was spent on something almost no one remembers or cares about, and here one sees opportunity and potential. A film like Fracture makes you think of John Waters’ Fruitcake, never made after financing fell through in 2008. It makes you think of David Lynch’s Antelope Don’t Run Here No More, never produced in the decade between INLAND EMPIRE and the third season of Twin Peaks.

And then you remember a film like Bird Box, released on Netflix in early 2018, which everyone watched and was just as frivolous and expensive as The Mothman Prophecies, and—from that—you get some good news. It might take a while, you might have to think about it for a while, but something was righted, a trend corrected after 2007, because today, a film like Fracture would never reach theaters because it would never get made for $10 million.