Lazy Cliches About the Financial Crisis 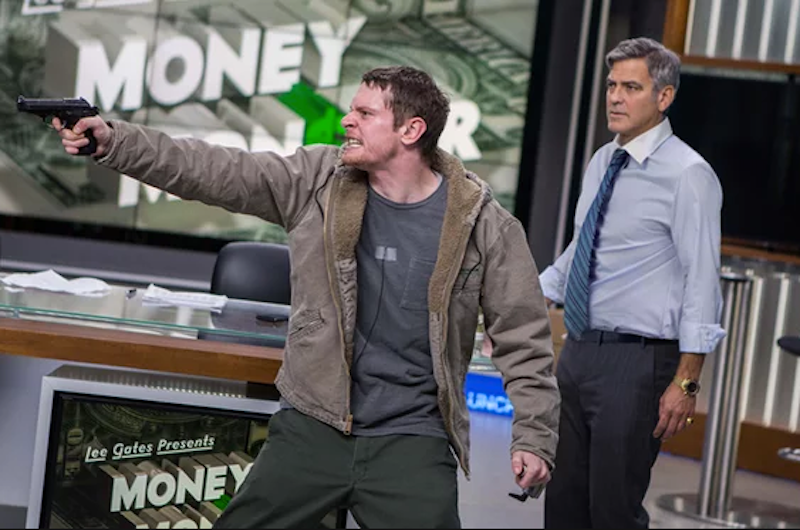 Money Monster belongs to a pair of New York movie traditions: The Hostage Situation Movie and the Wall Street Movie. And it’s the worst of both. On the former, it’s no Dog Day Afternoon, and it’s not even an Inside Man. And on the latter, Money Monster is breathtakingly dumb in all the ways The Big Short was smart. Full of bad scenes, glaring plot holes and mediocre performances from normally dependable actors, this is just a stinking failure all around.

Directed by Jodie Foster, Money Monster has a high-concept premise, which unfolds pretty much in real time: A Jim Cramer-like financial TV host (George Clooney) recommended a stock that tanked, leading a blue-collar guy (Jack O’Connell) who invested his life savings in the stock to grab a gun and bomb and hold the host hostage.

It’s up to Clooney’s producer (Julia Roberts) to make sure everybody stays alive, while also trying to expose the company in question and its oily CEO (Dominic West, McNulty from The Wire.)

So what goes wrong here? The list is long: the film has nothing new or relevant to say about finance or media. Not that Jim Cramer, and CNBC’s general boot-licking ethos isn’t ripe for a righteous skewering, but this isn’t it—Money Monster plays like someone watched Jon Stewart berate Cramer that time and concluded, “Why didn’t he have a bomb or gun?”

There are numerous plot holes and scenes that don’t make much sense, especially a scheme by Clooney at about the halfway point. The bad guy’s evil plan is both laughably convoluted and not really in any way representative of actual Wall Street misdeeds. The tone is wildly off, with weird laughs popping up where they least belong. And it’s hard to have sympathy for a guy who’s enough of a dumbass to invest $60,000 in one stock trade based on the advice of some bozo on TV.

Clooney is totally wrong for the role; his charisma isn’t anything like Jim Cramer’s and I get the sense that if his show were real no one would watch it. Roberts is in such a nothing role that it’s unclear why an actress of her stature was needed. As for O’Connell (from Unbroken), his character is a ridiculous caricature. If you thought some of those think pieces about Trump voters were condescending towards the working class, those were nothing.

Meanwhile, fantastic character actors like Giancarlo Esposito and Chris Bauer are given almost nothing to do, although Irish actress Caitriona Balfe gets some good scenes as a corporate PR figurehead. If you want to see a recent movie that makes the right points about the financial crisis and Wall Street—while also working as a standout movie in its own right—you’ve got plenty of options. There’s The Big Short, Margin Call, Arbitrage, numerous documentaries… even the very flawed HBO adaptation of Too Big to Fail is better than Money Monster.