On The Curse of Downers Grove, from director Derick Martini and screenwriter Bret Easton Ellis. 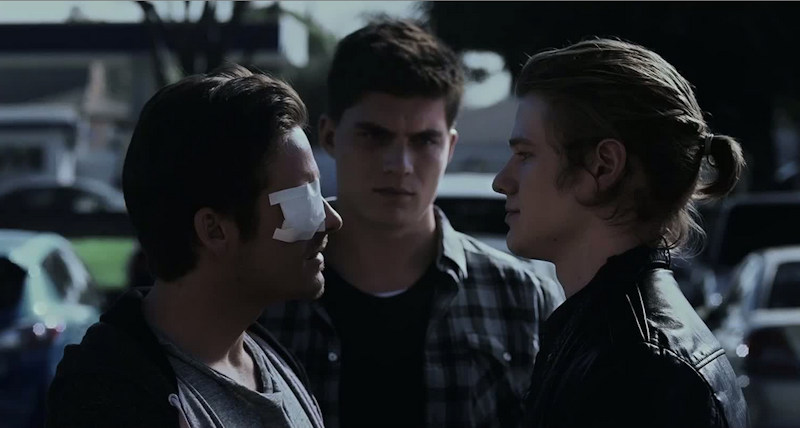 Chrissy (Bella Heathcote) wears her worries like a thick, black shawl. She’s a high school senior in a nowhere town, carrying bags under her eyes caused by abstract nightmares where teenagers die and mythical American Indians attack. She constantly crosses her arms, and nibbles at her nails. In her heart, she knows that the curse that’s plagued her town for a decade—ever since Downers Grove foolishly erected a high school atop of an ancient Indian burial ground—but in conversation with freaked-out classmates she rationalizes away the fact that every year a senior dies a couple days before graduation. She’s doomed and sad, and beautiful despite this, even as the plot grows unwieldy, strange, lumpen.

Adapted from a Michael Hornburg novel, The Curse of Downers Grove is a tonally odd thriller that somehow manages to intrigue despite an array of shortcomings and implausibilities. A mother who goes on vacation with her new boyfriend immediately before her daughter is about to graduate from high school? No one babbling about college plans? The ex-cop dad (Tom Arnold) of Chuck, the movie’s nominal villain (Kevin Zegers), is inexplicably able to influence the police force, because the nominal villain ordered his father to do so, after his dad beat the shit out of him earlier in the film? The nakedly expository scene where it’s very clear that Chrissy’s life is in danger, and her brat of a brother casually mentions that their long-gone meth addict dad left a shotgun behind that he taught both kids how to shoot? The moments where Chrissy is transformed into a Robert Rodriguez action heroine?

Yet the patent over-the-topness is a lot of the fun in a movie that isn’t truly keyed to horror. Its advantage lies in the fact that up until the end, it’s not exactly clear who the bad guy is, even if the least likable putz is a date-rapist, coke-snorting, football QB steroid-case whose flared-nostril maniac—he’s having the same dreams Chrissy is having, and somehow knows she’s having them, too—is enough to put The Canyons’ Christian to shame. There’s a subtle stretch in Downers Grove that lends the movie an interesting, possibly unnecessary dimension. Chuck is threatening Chrissy and her loved ones: it becomes apparent that they’re in mortal danger. As Chrissy and her greasemonkey boyfriend talk strategy, while her brother and her promiscuous, airheaded bestie Eyde (Jacqueline Emerson) play video games, oblivious to how fucked they are; within a broken home in a broken burgh, then, we suddenly have a short-lived, makeshift simulacrum of a nuclear family. It’s a cute gesture.