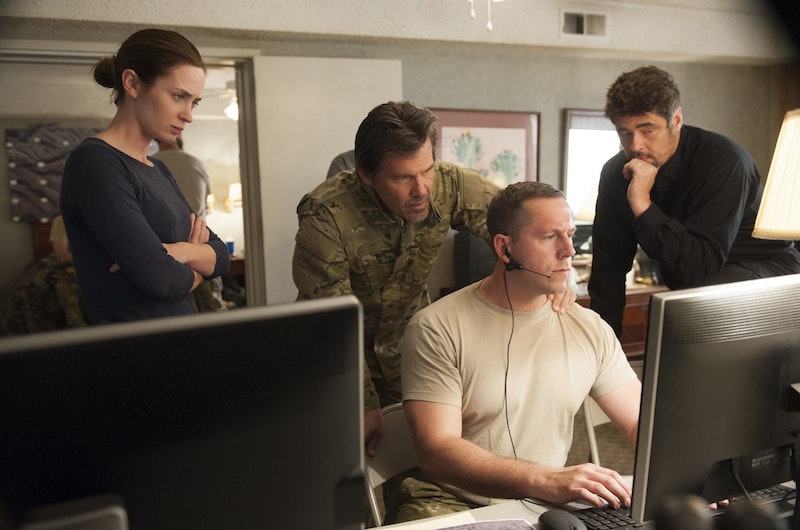 Benicio Del Toro looks like a guy with some dark secrets. This characteristic serves him nicely in Sicario, where he plays a haunted CIA asset named Alejandro. His handler, Matt Graver—portrayed by Josh Brolin, having way more fun than anybody should be allowed to in a Mexican drug-war movie—is the kind of dude who wears flip-flops to office meeting and is reliably loosey-goosey with the truth. FBI agent Kate Macer (Emily Blunt) is drawn into their orbit when her team raids a reputed drug house in Arizona that turns out to be dry-walled full of corpses, only to discover that the house was booby-trapped. Doesn’t Kate want to have a hand in taking down the people behind this ghoulishness? Fuck yeah she does, which is her eventual downfall: she’s got no clue what she’s gotten herself into.

Suavely directed by Denis Villeneuve and written by Taylor Sheridan, the slow-boiling Sicario is nowhere near as bleak as 2013’s The Counselor or The Cartel, Don Winslow’s recent novelization of the 2000s drug imbroglio; we’re not granted a view quite as intimate and unsparing of the carnage, corruption, and insanity that dope trafficking wreaks. Sicario’s venture into Juarez, Mexico to extract a prisoner for an fashioned rendition is hair-raising, but much of the action takes place on our side of the border, offering a law-enforcement perspective of the effect of Americans’ un-slaked thirst for cocaine and heroin. The movie’s lure is that we learn along with Kate just what extra-judicial mischief Graver and Alejandro are up to, and why. If you’re thinking that it isn’t immediately linked to swift arrests and prosecutions, award yourself a gold star.

Seductively shot, Sicario is exhaustingly bleak, as the desires of Kate and her partner Reggie (Daniel Kaluuya) for a straightforward, by-the-book justice are rendered at first naive, then outright laughable. In its sole concession to a Traffic-esque narrative cross, the movie occasionally turns its attention to a Mexican police officer, his futbol-playing son, and stoic wife. You know they’re there for a reason, and the point where their fates intersect with the main story is a tense, dark climax witnessed by and orchestrated by a single primary character. The lingering distance shots of border checkpoints are telling, and maybe suggestive. Existentially speaking, Graver and his ilk may have the right idea: everything’s falling apart anyway, so treat the drug war like an armed fiesta. But between our politics, drug addictions, fractured monoculture, and crumbling industry and infrastructure, it may be time to ask ourselves: are we inching, even imperceptibly, towards a time when the Canadian/United States border will be equally as embattled?