Terminator: Dark Fate is the best movie in the franchise since T2 in 1991. B+ 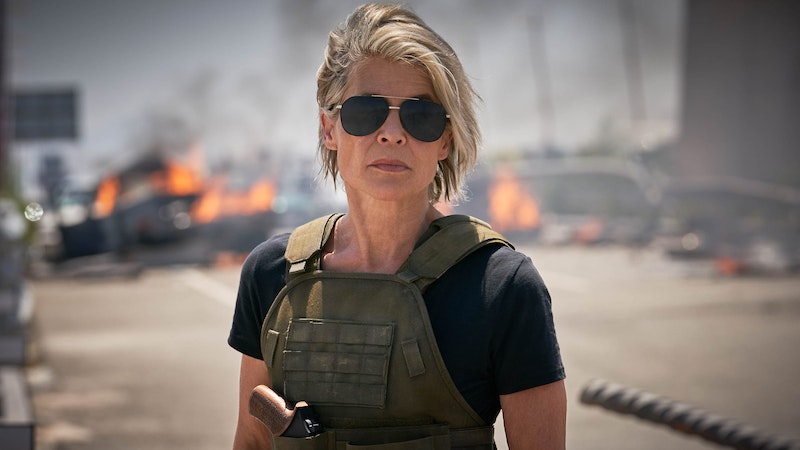 It took more than 25 years, four tries, the jettisoning of decades of canon, the return of creator James Cameron, and a pair of action stars who are now 63 and 72. But the Terminator franchise has come up with a sequel that's more than a pale imitation of its first two installments.

Terminator: Dark Fate is not only exciting, but also a Terminator movie for its time. Three of its main characters are women, a major plot point has the characters crossing the border from Mexico into the U.S., and the dystopian vibe is more in tune with the current times than 1984 or 1991.

Luckily, the amount of time travel in the Terminator universe makes both retconning and the resurrection of dead characters very easy. So Dark Fate jettisons the last 28 years of sequels, reboots and spinoffs and instead picks up directly the events of the franchise's best and most inventive film, Terminator 2: Judgment Day.

Set in a present day in which the good guys in Terminator 2 successfully prevented the rise of Skynet and the nuclear holocaust that was to take place in 1997, there's been a separate rise of different machines further in the future. But it’s still a traditional Terminator plot: The future bad guys have sent a seemingly indestructible Terminator (Gabriel Luna) back in time to kill a certain resistance leader but is battled by another time traveler named Grace (Mackenzie Davis), who's not a Terminator but is an enhanced human supersoldier. The film's other star is Colombian actress Natalia Reyes as Dani, a young Mexican woman who encounters the new Terminator.

Also along for the ride are Linda Hamilton, returning as an older, revenge-minded Sarah Connor, and the series' original star, Arnold Schwarzenegger, playing an older, "retired" Terminator, who's adjusted to life as a husband and stepfather. How this cyborg was able to age into his 70s, or grow a beard, is left unexplained, but Arnold remains so jacked that he's still believable as an action hero at age 72.

The younger cast is very appealing too, led by Davis, memorable in everything from the famous Black Mirror episode San Junipero to her long run on Halt and Catch Fire. Luna, best known from Marvel's Agents of S.H.I.E.L.D., is convincing as the killing machine in the tradition of Robert Patrick in T2, and the film gets creative in the many different ways he gets destroyed and then re-assembles.

Dark Fate essentially borrows the formula of Star Wars: The Force Awakens: It mostly re-enacts the plot of a past film in the series, while bringing back the key players in the original cast and teaming them up with a younger and more racially diverse cohort of new actors. And like that Star Wars sequel, what it lacks in originality it makes up for with expertly assembled action sequences, and the right amount of nostalgia.

Terminator: Dark Fate was directed by Tim Miller (the first Deadpool film) and has six different writers (including David S. Goyer and Billy Ray) if you factor in screenplay and "story by" credits. But the headline is that Cameron serves as executive producer, his first active involvement in one of these films since Terminator 2: Judgment Day in 1991.

Terminator movies, and even one TV show, have been made periodically in the years since T2, usually with Schwarzenegger involved, but never Cameron—and they've never been memorable. The only good moment in 2009's Terminator: Salvation was when Arnold—who was off serving as governor of California at the time—appeared briefly in a younger, CGI incarnation.

Dark Fate doesn’t match the original 1984 The Terminator or 1991's Terminator 2. The second movie, in particular, was a groundbreaking, much-imitated achievement in terms of both special effects and sci-fi plotting. But it's certainly better than every sequel that was made in the interim.