Follow-Up to Zombieland Not Ghastly, Not Great 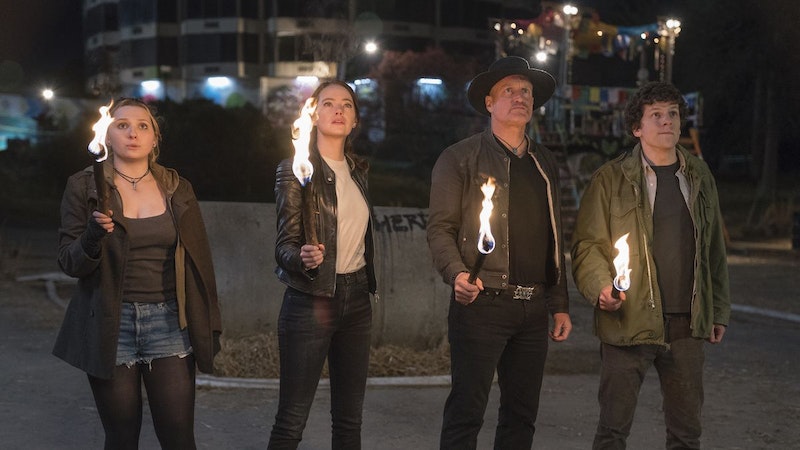 Zombieland: Double Tap didn’t perish from its grave case of sequelism. Even so signs of the disease stand out. Charming banter and interplay are reproduced, and being reproduced they seem calculated—can’t the characters talk any other way? The original’s nifty gags and gimmicks become self-referential and veer into formalistic whimsy (Columbus’ survival rules have some heavy variations worked on them). Worse, the character arc we enjoyed last time is the same arc we get this time.

In the first Zombieland, the characters learned they needed each other and that, hey, they liked it. Same thing again, which means the script must contrive reasons for the characters to get mad at each other and go back to square one. At the end of the first film, we were supposed to be happy when the heroes learned their lessons. Now, at the start of the new movie, we’re supposed to shrug when these lessons fall away and our friends act like nothing ever happened.

A shrug can infect a movie’s soul. For a ghastly example, see Guardians of the Galaxy II, that shambler escaped from Hollywood’s Pet Sematary. The new Zombieland has a limp and a deserted tilt to its jaw, but no limbs fall off. The contrived conflicts are engineered quickly and got out of the way, and several well-calculated new attractions are set forward. Woody Harrelson (as Tallahassee) gets a love interest in Rosario Dawson, who’s a squatter the heroes encounter at Graceland. The White House provides another setting, and the production design scores with a creation called Babylon, a hippie compound centered around an office tower. An insufferable hippie named Berkeley (Avan Jogia) is pumped up as a foil to Harrelson’s Tallahassee. Much more successful is Zoe Deutch as Madison, an airhead with (I think) Valley Girl leanings. The character ought to be a bore, but Deutch takes Madison’s one note and dribbles it, balances it on her nose, and walks it up and down her arms.

The four returning cast members do what they did last time, with the catch that they’re 10 years older. Woody Harrelson looks like Freddy Krueger, more so when he’s got his hat on. Abigail Breslin, now an adult, has developed a body type usually shunned by Hollywood casting directors, but she gives a good performance as bratty Little Rock all grown up. Present-day Emma Stone (Wichita) looks like a woman, not a girl, and seems out of place in the horsing around. Jesse Eisenberg (Columbus) has angles from which he looks like he might be an adult; otherwise he hasn’t changed. Ruben Fleischer’s direction includes an impressive fight scene with long pans done at close quarters. Like the first movie, this one features inventive, well-detailed tableaux of cars along deserted highways, and it throws in a masterly rendering of the decayed White House’s façade. The script has the problems already noted, but it gets where it’s going. All in all, Double Tap’s a nice enough film as long as you don’t see the first and compare.