The Lighthouse is a major success whose form enhances its content. A 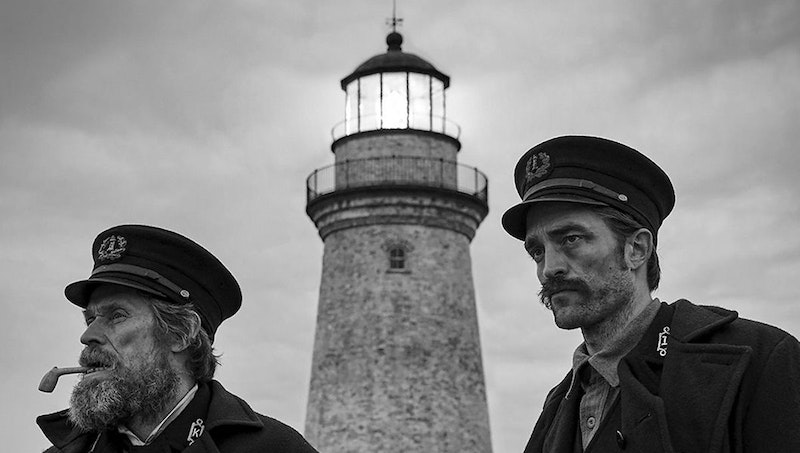 A remade landscape: “elevated horror” is thriving, A24 has become as recognizable as Supreme, and film fans are on edge as Disney closes its vaults and melts the keys on all the 20th Century Fox titles it owns. Matt Zoller Seitz’s piece for Vulture, “Disney is Quietly Placing Classics Into its Vault,” is worrying: “Several theater managers and film programmers (all of whom requested anonymity for fear of creating bad blood with Disney) said their requests to show older Fox titles had been either preemptively denied or revoked after the fact, despite fitting the description of a venue that should be allowed to do so. Sometimes no rationale was offered; other times, they were given a reason, but it didn’t jibe with what was happening at other venues.”

Have you seen a John Ford movie in a theater recently? Disney’s byzantine permissions may leave aspiring film buffs in the dark. If you care about movies, you should watch all movies, from all periods of film history. It’s not a long history compared to nearly every other art. One can conceivably master it. And in viewing the canon, it becomes easier and easier to see, think, and write about new movies. There’s no better example than The Lighthouse, Robert Eggers’ follow-up to The Witch. It’s only his second feature, but The Witch was such a hit that A24 greenlit a production that stipulated, on the title page of the script, that, "This film must be photographed on black & white 35mm negative, Aspect ratio: 1.19:1, Audio mix: Mono."

That’s narrower than the Academy Ratio, or 1:37:1, standardized in Hollywood in the early-1930s and used exclusively until the introduction of Cinemascope and widescreen in the 1950s. 1:19:1 is what movies looked like in the silent era, when Dreyer and Dwan and Murnau and Lang thrived. Eggers’ technical specifications could’ve easily been a familiar gimmick, especially coming from A24, but for once these demands are necessary, and completely integrated with the film’s story.

Robert Pattinson and Willem Dafoe play seafarers in the late-19th century. They’re stranded on a tiny island in Maine waiting out a brutal storm before relief can dock. Dafoe runs the lighthouse, and its foghorn blasts throughout, driving a psychic nail through Pattinson, who’s come to the island with an assumed name, running from a past he can never return to. Dafoe implores him not to “spill the beans” because it’s bad luck. He also tells Pattinson not to fuck with the birds on the island. Very bad luck. Pattinson gets frustrated hauling coal one day, and a seagull tries to start some shit with him. He grabs the seagull by the neck and smashes it against the cistern, pulverizing it and sealing his fate. There’s no escape, and no relief to come once you’ve crossed the birds.

Jarin Blaschke’s cinematography is surprisingly dynamic: The Lighthouse isn’t all stationary symmetry and cookie-cutter compositions. When you hear about 100-year-old lenses and gaffers wearing sunglasses, folly isn’t far away. But there are some bracing tracking shots here, and even more effective turns and push-ins during particularly tense moments between Pattinson and Dafoe. I saw James Whale’s The Old Dark House shortly after The Lighthouse in the same theater, and I was struck by how similar the pictures look. Whale’s film was made in 1932, and with a 4K restoration by Cohen Media, the only thing separating it from Eggers’ film is the antique sound equipment. Other than that, you could put a close-up of Pattinson in 2019 and Gloria Stuart in 1932 side-by-side and they’d appear to be from the same film. That’s why keeping film vaults open is necessary: Eggers was only inspired to make The Lighthouse because he was able to see the works of Dreyer and Murnau projected.

This movie makes me want to read Moby Dick just for this (from one of the Safdie Brothers): "The light in the lighthouse was that chapter in Moby Dick just about the color white." The color white is a revelation in The Lighthouse, a movie with only two characters (mostly) and not much else. The blank slate that Pattinson’s character seeks drives him insane: the solitude of the island and the abysmal conditions drive his guilt and sins back out into the world. Dafoe, in perfect sea captain accent, almost revels in his “lad’s” descent into madness. They barely speak to each other, and when they do, there’s little substance; it’s quotidian. There’s a punishing atmosphere inside that house, a psychodrama that would remain even if the sun came out.

The score and sound design in particular are stunning. The lighthouse’s foghorn, designed by Mariusz Glabinski, is apparently period-accurate, but sounds gloriously overdriven, like a missing stem from a Pharmakon or Prurient record. I’m not sure where Mark Korvern’s score and Glabinski’s sound design begin and end, but they’re as important to the success of The Lighthouse as Blaschke’s cinematography. The soundtrack is truly Lynchian, an adjective that’s second only to “Kafkaesque” in the overuse bin. In fact, the infamous eighth episode of Twin Peaks: The Return was what I kept flashing on during the end of The Lighthouse. Another notch for the sound team: Pattinson’s steel wool, Big Muff scream as he finally touches the light makes for the best ending in 2019 this side of Cielo Dr.

I can’t stress how bracing The Lighthouse is and how much of its power is in its seemingly gimmicky production. There was reason to worry: A24 is a patron of the technically adept and emotionally vacant, like Ari Aster, whose Midsommar I enjoyed at the time but haven’t thought of since. Aster strikes me as someone who’s put in the work, a real geek for cameras and lenses, extremely adroit technically, but with nothing much to say. The Lighthouse is not a topical movie; no one will be able to shoehorn a class warfare narrative onto it. It’s a familiar story of Lovecraftian horror and insanity, a story I don’t usually care for. But through form, Eggers has elevated a ho-hum premise into a fully realized nightmare. The Lighthouse isn’t a crowd pleaser, but I’m still thinking about it days later. It offers so much in its negative space, a well of white to return to again and again.